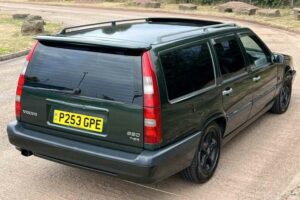 Cancel the state funeral, tell the king to stop blubbing – Brave Pill is not dead. Last week’s absence came after a group of animal rights campaigners pointed out that BP had run continuously for 178 weeks without a break, meaning the database hamsters were long overdue for a holiday. So we sent them to the classiest guesthouse in Fleetwood for five days to cure them of such indolent cravings. They are now positively looking forward to the next 178 weeks of unremitting toil.

Regardless of such silliness, we’ve opted for a gentle return to work – with a very stylish Volvo 850 T5-R. Being a Volvo means that few are going to regard it as being much braver than choosing Nando’s hot Peri-Peri sauce instead of the mild one. But this one increases the risk quotient both by being a Japanese import which managed to cover more than a quarter of a million kilometres before landing in Blighty – seriously impressive in a country where few cars ever break the 100,000km barrier. It is also being offered for what looks, by modern standards, like a bargainacious £7,450 – which is more than enough justification to feature it here.

There have been other Volvo Pills before, but this is our first 850 and – according to those well-rested hamsters – the first to be fitted with the transverse five-cylinder turbo engine long associated with the brand’s faster and more interesting offerings. The 850 pioneered that powertrain layout, and the sought-after R variant is widely recognised as one of the best examples of it – so there are plenty of reasons to be celebrating this one.

While it might not look about as radical as a pile of boxes in a box warehouse, the T5 deserves credit as one of the cars that did much to transform the fortunes of the company that created it. Prior to its arrival Volvo was one of the most staid, sensible and boring car brands in the world. It had enjoyed success with a range consisting largely of large, slabby saloons and estates sold to the sensible middle classes drawn by utility, safety and the ability to lug caravans slowly. This clientele had minimal interest in performance or design that didn’t consist entirely of straight lines. Volvo’s few dalliances with more elegant or interesting cars, like the 780 Bertone and 480 Coupe, had mostly been commercial damp squibs, confirming the company in its small-c conservatism.

All this was in marked contrast to Sweden’s hedonistic reputation for partying and free love. Back in the 1980s the country’s international reputation was still dominated by Abba and the sort of magazines that uncles used to receive in plain brown envelopes and then believe they had successfully hidden on top of the guest wardrobe. But Volvo products were about as sexy as carpet slippers; not so much Ingrid Bergman as Bernard Ingham.

The 850 was the start of a move to modernise Volvo. Work on it had begun as long ago as the 1970s, when the company realised that many rivals were switching to transverse-engined models. A very slow gestation meant that the smaller front-driven Volvo 440 and 460 actually got to market first, although these were built by Nedcar in the Netherlands and were launched with Renault-sourced engines.

The 850 was to sit further up the tree and would get all-new Volvo-designed five-cylinder engines that were compact enough to sit sideways across the nose, and although all-wheel drive would be offered most would be front-driven. Styling was hardly radical, being done under the direction of Jan Wilsgaard who had been Volvo’s design director since 1950. But as well as plenty of straight edges and right angles it did boast some softer contours, ones that Volvo’s next head of pencils, Peter Horbury, would evolve into actual curves.

As launched the 850’s choice between a 141hp 2.0-litre five-pot and a 168hp 2.5-litre version gave respectable urge in the early 1990s, but Volvo soon recognised it would need some more poke if it was to keep up with beefier rivals. Fitting a turbo was the obvious answer, with the first 2.5-litre 10-valve, introduced in 1994, making 222hp and giving the 850 saloon the ability to dispatch the 0-60mph dash in just 7.1 seconds. Which made it a rocketship by the standards of the time.

Yet it still looked like a standard 850. As a teenager I remember pulling a cheeky overtake on a seemingly innocuous 850 in my K10 Micra, catching it napping on the way out of a 30 zone. The 50hp Nissan couldn’t pass much, but Volvos were always fair game. But a few seconds later the mirrors were full of headlights and a clearly irate T5 came steaming past at an impressive rate and disappeared into the distance. I was probably lucky it was a fellow civilian; the T5’s combination of pace and invisibility quickly turning it into a favourite police interceptor.

The T5 was successful enough that Volvo decided to create a rarer, faster version – the T5-R. This got a boostier turbo and engine management that was tuned with Porsche’s help, the German firm also helping with chassis mods. Other changes included grippier P-Zero tyres and standard fitment of Volvo’s new side airbag system, the first in the world and an option on lesser models. Power increased to 243hp and the 0-60mph time fell to under six seconds for the manual saloon. As an automatic estate our Pill will be only slightly slower.

It is also one of what t’internet reckons to be 749 T5-R’s that found their way to Japan – getting on for double the 440 that were originally sold here. A long period in the residual doldrums thinned the number of UK examples, with some having been tuned to deliver unlikely (and often unsustainable) power outputs. But in more recent years the T5-R’s status as a cultish neo-classic has seen values rising strongly. While our Pill is the only one in the PH classifieds at present, there is a one-owner UK saloon being offered elsewhere for an eyebrow raising £26,950. So this one looks like a steal.

Having come from Japan, we’re obviously denied much of an MOT history to gawp at. Our Pill flunked its first test in February this year for the egregious failure of its front nearside dipped beam, before recording a straight pass later the same day. The dealer promises it is rust-free and comes with an extensive service history, although one that will require an understanding of Japanese to fully appreciate. Although the JDM combination of heavy rear tints and wind deflectors is unlikely to win much love from anyone seeking originality, both would be easily reversed.

Downsides? Few, to be honest. There is a well-developed ecosystem of Volvo specialists and good parts availability. The engine can be sensitive to missed services and prone to blocked PCV crankcase ventilation valves – these can cause oil seal failure. Gearboxes also need fluid changes to last and rust is an increasing issue on UK cars, the youngest of which are pushing 30 at this point, although corrosion shouldn’t be an issue on any recent Japanese import.

But presuming this one looks as good up close as it does in the pictures, it really could be one Swede ride.