Volkswagen Forgets Romania Is In Europe During Its Power Day Event 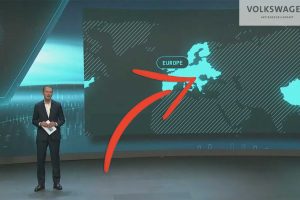 The map VW showed doesn’t lie: Romania’s outline can clearly be seen as not being part of Europe on VW’s planned fast charging map.

Look, I know Romania is on the eastern fringes of the Old Continent, quite a long way from Volkswagen’s headquarters in the western European town of Wolfsburg, in the continent’s industrial powerhouse, Germany. And I know that from Germany, Romania may look like an insignificant plot of land in a problem-plagued part of the continent, but let me assure you it is still a European nation.

Why am I saying this? Well, during Volkswagen’s recent Power Day presentation (they must have thought long and hard about what to name it and were clearly not inspired by Tesla at any point during the naming process) they put up a map of Europe on screen. Said map showed where Volkswagen plans to install rapid charging infrastructure and Romania is clearly not on that map, even though all its neighbors and pretty much all of Europe is highlighted too.

That peculiar fish-shaped territory is Romania and it seems VW does not acknowledge that it is part of Europe, even though Romanians are huge fans of the brand. Is this how Volkswagen repays their undying loyalty (exhibited by buying droves of used Golfs and Passats)? By not including Romania on the map?

Joking aside, It also looks like Norway is missing from that map, so at least Romania has select company, but we really wonder how and why VW deliberately chose to avoid highlighting the country on the map. We’ll have to wait and see if this was a goof or if Volkswagen genuinely has no intention of installing its network of chargers in the country.