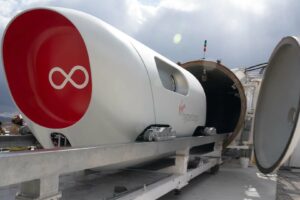 Virgin Hyperloop came to be in June of 2014, promising to revolutionize transit with its concept of pressurized, high-speed pod travel. Now, over $400 million dollars in funding later, the company has abandoned the passenger business entirely while laying off half its workforce and pivoting to freight transit, as the Financial Times reports. The move comes after nearly a decade of feasibility studies, several functional concepts built, the world’s first human test of a vacuum-pressurized maglev transit system, and even hyperloop-specific language—and funding provisions—included in last year’s omnibus infrastructure package bill.

Hyperloop works on a simple principle: a significant amount of efficiency lost in traditional means of high-speed travel, such as planes and trains, comes from wind resistance and friction. According to a 2003 study, a staggering 16 percent of energy consumed in the United States per day is spent entirely on overcoming aerodynamic drag for travel. The modern hyperloop concept stems from a 2013 whitepaper published by Elon Musk, where he suggests solving these efficiency issues in high-speed travel by simply removing both air and friction. By sending transit pods through a low-pressure system, air resistance is virtually made nonexistent, and by using a combination of maglev and air-cushioning, there would be virtually no friction; with this, the modern conception of the hyperloop was born. The original white paper claims that a 700-mile-per-hour hyperloop pod would only need 134 horsepower to achieve that speed.

Of course, the concept behind the hyperloop itself dates back over 200 years, where the idea of vacuum-pressurized tunnels to transport freight first appeared in a 1799 volume of The London Mechanics’ Register. The modern, maglev-based version was first suggested by Robert H. Goddard—better known now for creating the world’s first liquid-fueled rockets—who envisioned the concept in 1904, in a story he wrote for a creative writing class. He was posthumously granted a patent for the concept in 1950. The idea had largely fallen from the public lexicon until Musk’s whitepaper and catchy “hyperloop” terminology brought it back into popular discussion.

So with hundreds of years of discussion and technology that at long last promised to keep up with plans, why did Virgin abandon passenger transit in a country desperately needing high-speed transit? After all, Virgin Hyperloop’s concept was simple, appealing, and stayed remarkably faithful to Musk’s whitepaper. A magnetic levitation (maglev) suspended transport pod, entirely contained inside a vacuum tube, would rocket passengers along routes at claimed speeds of up to 670 miles an hour. Virgin proclaims that its proprietary system is eight times as efficient as the fastest operational maglev train on the planet, which currently operates at speeds of 270 mph and connects Shanghai’s Pudong Airport and a downtown metro station. Advances in maglev trains have since yielded prototypes with even higher speeds, cracking the 370-mph mark in Japanese test loops, but the company boasted vast advantages over existing high-speed trains. For example, Virgin additionally claimed its product could handle grades six times steeper than high-speed rail, turn over four times as tight as a train could manage, require much smaller right-of-ways than traditional train-based high-speed transport, and be able to be operated fully autonomously.

But the company only ever built two working prototypes over its existence, and neither approached the lofty claims that Virgin pitched. The first pod, known as XP-1, was a fully unmanned aerodynamic and propulsion tester that reached a top speed of 240 mph on the company’s 1,620-foot long test track in the deserts of Nevada. This is obviously way less than the 670 mph top speed the company envisioned, but it also approached the theoretical maximum possible for such a short track, which was claimed to be 250 mph.

The second prototype, a larger pod with an interior dubbed XP-2, finally completed a manned test run in November of 2020 with two passengers on board inside an actual vacuum environment. The pod traveled for approximately 17 seconds at a maximum speed of 107 mph and stopped. By this point in the company’s development, full-size concept sketches were released, with pods seating up to 28 passengers a possibility. Virgin was already conducting feasibility studies across the entire globe.

But progress past the initial feasibility study was continually hampered by the lack of actual infrastructure and hard data. The company’s test loop never was built longer than its initial 1,620-foot span, and throughput questions still plagued the company due to the time-intensive vacuum airlocks that would be required for passenger services. When cities tried to progress past route planning or preliminary budget estimates, they found themselves stymied by the lack of data to work from for more strenuous impact studies.

For example, the Dallas-Fort Worth metro region has been conducting high-speed transit studies for nearly three years to link north-central Texas with passenger transport, and hyperloop was one of the explored methods. In a conversation The Drive had with the North Central Texas Council of Governments’ Principal Transportation Planner Brendan Wheeler, he explained that the first stage of any infrastructure project such as hyperloop or high-speed rail is an environmental impact study, which in Texas’ case is an ongoing investigation. The region makes perfect sense for a hyperloop, however, with corridors already established along Interstate 30 for high-speed transit, and relatively flat and easy to grade terrain dominating the area.

On Virgin’s website, the Laredo-Dallas corridor was advertised as one of the six places in America that the company was hoping to construct a hyperloop, with claims that a hyperloop could save travelers 14 million hours in transit per year. But on Feb. 17, 2022, the council was forced to abandon hyperloop as a transit option before the evaluation window even was completed. Wheeler explained that the technology is still so far in its infancy that trying to perform any environmental survey just isn’t feasible yet. He went on to say that while the technology still holds interest for them, for passenger transit on the timeframe the state wants, it’s too undeveloped to progress any further, and proven high-speed rail has to be the defacto choice.

Because Virgin was the only company that had ever performed any human testing with its hyperloop, it has left metro areas around the U.S. reeling after spending years on feasibility studies for a technology whose implementation has now gotten even more distant. The Mid-Ohio Regional Planning Commission, for example, spent two years on a Virgin-assisted feasibility study for a hyperloop linking Chicago, Columbus, and Pittsburgh. Now, with the company discontinuing plans for passenger transit, so, too, has the MORPC, instead deciding to focus on the movement of freight.

And despite the appetite for high-speed passenger transit, there doesn’t seem to be anyone ready to step into the gap left by Virgin. Musk’s own Boring Company has its own hyperloop in the works and promises that at some point the concept of his original whitepaper will be offered. Right now, though, the only person-transporting system it has built is an atmospheric pressure tunnel system with Teslas driving through it as transportation pods in LasVegas. The system is vastly slower than the original concept and has been plagued with issues, despite costing taxpayers $50 million.

HyperloopTT, another 2010s startup, currently has a test facility in France, but human tests have not been undertaken yet. Even after the Northeast Ohio Areawide Coordinating Agency collaborated with the company on a $1.3 million feasibility study, it’s still unclear what timeframe HyperloopTT intends to have human testing completed by.

Virgin still has a few freight projects in the works, and the company is ostensibly targeting the middle of the decade for its UAE-based freight line. The company did not respond to The Drive’s inquiry for comment in time for publication, and it has not put out any timetable changes in the wake of the layoffs. But regardless of its future plans, the future of high-speed transit in America just got a lot more muddled.

Got a tip or question about the hyperloop? Email the author directly: [email protected]