Video: Almost hit a lady walking on the road to avoid oncoming car 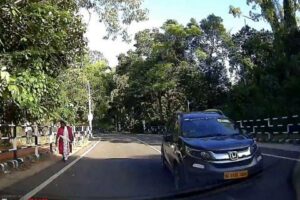 It shudders me to think that few inches spared her from being sandwiched between my car and the metal fence.

BHPian akkosetto recently shared this with other enthusiasts.

Hello all, this is my first post in Team-BHP and it is both a major near-miss and a minor accident.

Last Friday, I was travelling to Technopark, Trivandrum in my car, and to my horror a BRV going opposite way swerved into my lane. To make things worse, there was a pedestrian on left side of the road – trapping my car in between.

I was able to manoeuvre through this without hitting the BRV. Pedestrian though got a slight knock by my Left RVM, on realising this I stopped the vehicle. She was shocked, but was OK and not injured. The BRV fled the scene though.

It shudders me to think that few inches spared her from being sandwiched between my car and the metal fence.

I would like the BRV driver to be charged with Negligent / Rash driving for this, but since this is not an accident / hit and run as such, is that even possible? If possible, should there be a police complaint or reporting to MVD somehow is enough? Here’s what BHPian silversteed had to say on the matter:

That was close, and glad that you and the pedestrian came out of the situation without any damage.

You could’ve called the police helpline immediately – they would’ve handled it.

I’ve had two experiences with Kerala Police for similar incidents. The first one a few years ago, a Santro (or an i10?) was being driven extremely rash on the NH544 somewhere near Chalakkudy. Called the police and reported it – provided the number, mentioned the rash driving and also told them that it could be a DUI. They actually intercepted the car at Koratty and called me back asking if we were alright. Apparently they had received a complaint from someone else as well. Turned out to be DUI.

The second one is more recent – a taxi returning to Kochi after dropping some expat somewhere near Palakkad was being driven rash. Cut us off and wouldn’t let us pass by straddling lanes and driving slow. We were near Alathur, so drove into the police station which was just a km off the NH544. They stopped him a little ahead, while we were waiting in the police station and they put him on the phone. At first the driver tried to blame us, but we were ready with the dashcam footage and pics, so he had to eat his words quite soon. At our insistence, the cops let him go with an apology and not a case. Not sure if he was fined though.