Vehicles with different number plates: Human error or intentional use 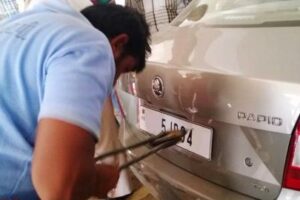 People could be following this practice to avoid paying fines/challans by the traffic police.

BHPian Fx14 recently shared this with other enthusiasts.

The anomaly seemed to be intentional as in the case of one scooter illustrated below, the rear number plate was the old painted number plate (probably the genuine number), while the front number displayed was a fresh sticker on the front body panel of the scooter with the (intended?) mismatch in the number.

To discount any human error, which owner would not be able to notice the difference in the number of their old vehicle?

Why would they attempt this?

Of late, traffic cops are more than happy to just click a photo on their mobile of the front number plate of vehicles of traffic offenders and let them go, as against the earlier practice of checking all vehicle documents and collecting fines on the spot. They don’t even check the rear number plate.

This may have enlightened such fraudulent vehicle owners to change the front number of the vehicle to pass the buck to another vehicle owner.

It’s appalling to observe that there are vehicle owners willing to stoop to such behavior and break laws while passing the risk / fines intentionally to another unsuspecting vehicle owner. The amount of fine is minuscule compared to the cost of the vehicle, unless the owner is intending to be a regular offender.

This fraud can be easily detected by the cops if they start checking both front and rear numbers of vehicles as well as the vehicle documents.

Here’s what BHPian warrioraks had to say about the matter:

Ingenuity at its worst. People indulging in such practices are practically getting into identity impersonation. Such cases when caught need to be treated as a serious crime, and not as a mere traffic offence. A few years of jail should be a minimum.

Here’s what BHPian MT_Hyderabad had to say about the matter:

Sorry to break this conspiracy theory, but this usually happens when the front and rear number plates are printed at two different times.

Most number plate printers (also called Radium works) use the other number plate, or verbal communication from the owner/driver to create the broken number plate and makes a transcription error sometimes.

We should be careful while getting number plates printed. I will also recommend checking your number plates for such errors, now.

Cars with clearly written type of fuel (Diesel/Petrol) also gets filled with the other fuel. These are 4 digit numbers and human error is very much possible. I myself get confused sometimes that my car’s number is 9658 or 9568.

Here’s what BHPian Jeroen had to say about the matter:

All the traffic fines will now go to the owner of the plate. In the Netherlands, the owner of the car is responsible and liable under all circumstances for all traffic offences. It is not sufficient to prove you were not in the car, you have to prove it is not your car.

Dutch plates are a little more difficult to replicate than most. But they still can be replicated. It happened to me some years ago on my company car. I was getting speeding tickets and parking tickets in places where I had never been. One speeding ticket caught my eye, I happen to recognise the date. It was the first day of our holiday in the Caribbean to visit my wife’s family. We were in a 747 over the Atlantic Ocean at the time the speeding offence was committed. So then I checked a few more tickets I had received earlier. All impossible to have been me. Problem was on a company car, the lease company as the owner is held liable. So they need to pay all fines. In the lease agreement, the driver commits to refund them all, plus an administrative fee. My employer clears the outstanding amounts automatically from the monthly payroll and might not always tell you. So I had not really noticed.

In the end, I ended up in court. I could prove my company car was slightly different from the car in the photos taken by the speed camera. I had a letter from the dealer to back up my claim, which ultimately persuaded the judge I was innocent.

It can be a real pain and a damn nuisance.

Here’s what BHPian batish had to say about the matter:

True! People do resort to these practices here. It’s just that these things are not publicised much in print media, online media etc.

The only solution to this menace/fraud is High Security Registration Plates. These things are a bit difficult to copy and even if they are falsely printed on similar fonts, the serial numbers of these plates cannot be as they are registered on VAHAN Database. So before issuing a challan, the cameras must verify the serial number of these plates with their database and then issue the challan.

Cops in Chandigarh do not even spare a second to issue a challan for Non-HSRP Vehicles.