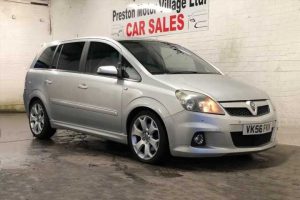 Vauxhall would seemingly try anything 20 years ago, good and bad. God love it…

Hard not to love the Vauxhall that strutted its way to the performance car buffet at the turn of the century. With General Motors wallet in its pocket, it signed off the VX220. It went racing with gusto and no little success. In 2004, with the knowing wink of a compulsive gambler holding a marker pen, it imported the Monaro. It could apparently do no wrong. Drunk on the middling success of its niche-based strategy, it began green lighting the sort of ideas that usually fill out the bottom inch of a manufacturer's waste paper bin. In 2005, the Zafira VXR was born. Total machine.

How could it fail? The world was hot for MPVs back then. So inexplicably hot that it makes the current vogue for SUVs seem sage and commonsensical. Why have a sleek D segment contender when you could buy a French interpretation of the heinous American minivan? For reasons impossible to fathom two decades later (or even at the time) the MPV shifted like hot cakes. So why not make one that properly shifted?

Of course Vauxhall had ready access to the necessary ingredients, having just installed a 240hp 2.0-litre turbocharged four-pot in the contemporary Astra VXR. The fact that the much lower, lighter and more capable hatchback had struggled somewhat to cope with the decidedly punchy output was apparently dismissed as a trifling concern; in the engine and six-speed gearbox went, the latter looking no more at home on the centre console than the big bumper remodel did on the Zafira's frumpy body.

The result was undeniably fast. It managed 0-62mph in 7.2 seconds and Vauxhall said it would hit 140mph no problem. It also said the VXR was the quickest MPV you could buy, which was hardly a claim of lofty greatness, but it spoke volumes about who the manufacturer was marketing the car to. 'Daddy Cool' noted Boney M. repeatedly in the TV advert as loony school children flocked to the Zafira like wasps to a Yorkie wrapper. And why not? It was a fast Vauxhall, after all. Like the Monaro.

The problem was that in real life the school children would have needed the constitution of a WRC co-driver to withstand a spirited drive in the countryside. Vauxhall had given the Zafira's chassis a light dusting of stiffer settings, but it was still very much an MPV at heart and therefore about as well suited to fast wheel work as a hot air balloon. 'Bonkers' observed one bemused review at the time. And not in a good way.

It is probably a testament to Vauxhall's swashbuckling heyday that it sold any examples at all; ditto the fact that a significant proportion of them are alive and well enough to be licensed today. Here's one of them – the only one on PH, in fact – a silver metallic example from 2006 with a full service history and 103k on the clock, available for £4,695. Like all bad sci-fi, the car has likely accrued a cult following in some corner of the internet in the last 15 years, but that's not why we love-hate it. It's the mere fact that the Zafira VXR exists at all – and not as the result of a tuning firm's one-off folly, but because a deeply mainstream manufacturer summoned it into being. The same manufacturer who saved the Lotus Elise and cheerily imported Australian muscle cars. And then built the Meriva VXR. Beat that, Stellantis.