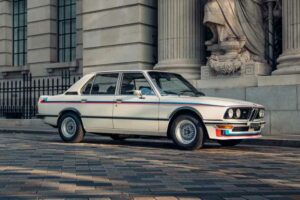 A few extraordinary BMWs have been created in South Africa over the years. There was the 745i SA, for example, the M1-engined E23 7 Series (!) that made an epic touring car, plus the stunning 333i – a 3.2-litre E30 developed with Alpina. BMW South Africa is still doing its own thing to this day, with a 330iS Edition available there and nowhere else. But it’s a less special prospect than what went before.

Before all of those cars there was the 530 Motorsport Limited Edition, or MLE, the first of these incredible South Africa-only BMWs and considered by some as the first M car (even if it didn’t have the official moniker). The homologation special 5 Series first appeared in 1976, and the M1 wouldn’t be on sale until the end of the decade. In 2022, a very special year for fast BMWs, the MLE is a very significant saloon.

It was devised to achieve success in South Africa’s Modified Production Series, which it emphatically did, winning every single race of its first season. The MLE was so successful, in fact, that it campaigned in South African touring cars until 1985. Looking at the spec for the homologated road car (100 were required; it’s believed 110 were made) it isn’t hard to see why the 530 made such a great racer. Weight was slashed to little more than 1,200kg thanks to the use of aluminium and thin-gauge steel for the bodywork (with holes drilled out to save further kilos!), lighter wheels, reduced sound deadening, manual windows and no air con. The 3.0-litre straight six was uprated, too.

The success and the spec make the MLE extremely collectible almost 50 years later, but that assumes one can be found. Even BMW struggled when it aimed to restore a 530 MLE back in 2019. Back before BMW M even existed, the need to keep a racy and rare 5 Series pristine wasn’t there; the desire to thrash a 1200kg, 3.0-litre BMW probably was. It took BMW with all its resources years to find a donor car, and that was obviously in South Africa; to have an MLE for sale in Brentford, then, is remarkable.

Imported from SA in 2020, it’s described as ‘nothing short of sublime’ – there seems little reason to doubt that, given the apparent condition. Plenty of love has been lavished upon the 5 Series even in its couple of years here, including engine work, a brake overhaul, suspension refresh and refurbished wheels. Any E12 5 Series will look cool nowadays, but a 530 MLE this good – in white with those graphics that have become so iconic – is off the scale. You wouldn’t even have to drive it, surely, to absolutely adore it.

This is handy because what was once a humble 5 Series now has the price tag of classic exotica. Given the history, it makes sense, but any prospective buyer would surely give more thought to using an old-school BMW (rear semi trailing arms and all) now it’s worth six figures. £114,950, to be exact. Which will see some tea splurted on keyboards, no doubt, given this is a car never sold in the UK. On the other hand, the MLE is an astonishingly rare bit of M car history, and it’s hardly like any of the earliest M3s and M5s – let alone the M1 – are what would be called cheap classics nowadays. A once-in-a-lifetime opportunity for the price of a new M5, the appeal to BMW aficionados couldn’t be any clearer.