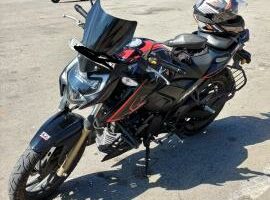 My initial intended usage was just for the city, a means to commute around the city and to and fro university, until the touring bug bit me.

BHPian Hagaru recently shared this with other enthusiasts.

Hello All! I’m Hagaru, and this would be my first post on the site. Thank you for having me here.

One thing I noticed was the lack of current gen BS6 RTR 200 posts, so I would like to start my Team-BHP life with the story of my first bike, The Apache RTR 200 4v.

I would also like to apologise in advance for the shortage of pictures, as I don’t take many of them.

Please Jump to ‘Considerations of the Bike’ to skip the life story and get straight to the motorcycle.

As a child, I was never into motorcycles. I was always more inclined towards 4 wheels than 2. The only premium motorcycle I adored was the Ninja. I really loved the signature green colour on it. One of the first things I did, right after I turned 18, was to get a license, and even during the application phase, the only reason I applied for a Motorcycle with Gear license, is because my dad pushed for it. It made no difference to me, because once I was accepted into college, the plan was I would be allowed to take our then family car, a 2012 Ford Figo to college. In fact, I had put off practising the 2-wheeler until 3 days before the test! It was a genuine miracle I passed the test, since it was held on the test track and was harder than I thought.

This is where it all started changing. Rising fuel prices, and with the way they saw me ride, prompted my parents to consider buying a bike for college purpose. The conversation was very weird in my head. It was my mom who initiated the conversation.

Mom: ‘(Hagaru), have you considered taking a bike to college?’

Mom: ‘Could you get an automatic bike..?’

Me: ‘I don’t like Dad’s Jupiter much, but an automatic bike maybe..?’

Mom: ‘No these are too expensive’

Dad: ‘You only need to get used to it, you did pretty well’

Me: ‘Is that so? I may consider it if you let me buy a good sports bike (laugh)’

What was supposed to be a short joke between us, changed my life.

Considerations of the Bike

I decided to give it a go, and maybe find a bike I may like.

At this point, I wasn’t well-versed with many motorcycle considerations. The engine capacity and power didn’t matter to me. But there were somethings I was particular about, after my research.

With that, we have our options

To be kept in mind

I’ve listed down all the vehicles I went over, regardless of if it met my above requirements or not.

No. Everything about it screamed no. The throttle on the mid vehicles is too powerful. I didn’t want to see the grim reaper just yet. It also felt overpriced for my needs, especially when you compare the 125’s cost to its competitors.

Good bikes. I really like the mean look of the MT-15. The throttle felt right, seating position was comfortable. Rejected on the grounds of service. The closest Yamaha Service centre doesn’t have the best reputation in the area, topped by the distrust of my parents towards’ Yamaha.

Honda H’ness was a very comfortable motorcycle to ride. We rejected it because of the lack of servicing centres nearby, with the closest one being 15 KM from our home (Isn’t a lot, but my parents prefer to have everything next to them). The bike was also a fresh entry into the market at the time. Didn’t want to risk it with a new release.

Weight. The Bikes felt very very heavy. I wasn’t confident I could handle city traffic with that. Another worry was with RE Maintenance. A friend’s Himalayan was in and out of service thrice over the span of a year due to mechanical issues.

Dominar was instantly rejected over the power and the weight. It did feel like a very good VFM purchase. The NS200 was a very very hard bike to reject. Opposed to popular opinion, I was quite fond of the white rims. It felt more powerful. What pushed me away was the outdated tech, and it felt harder to change gears on that than on the bike we ended up selecting.

On the list only because I saw it on the road one day, and I really liked how it looked. Had to reject it mainly because of the price and maintainance cost. But if I were to upgrade, this bike would surely come back into consideration.

The first time I saw the RTR 200 in the showroom, I knew this was the vehicle to have. It screamed ‘Pick me.’ Dual Channel ABS came only with the 200 at the time, and it even had ride modes. To a first-timer like me, that felt like a cool thing to have. Not to mention all the gizmos with the speedometer and the mean headlamp and DRL look. Oh man, I loved this bike.

The closest service centre was right in front of our house, and we were familiar with some people working there, so we were able to trust them as well.

Looking back, it wasn’t the best of experiences. For starters, we requested a KA 05 registration over KA 51 on the bike, which was rejected even though we offered to pay more. Other Showrooms offered us the option but we still went with this one considering how close it was to home. We wanted the delivery specifically on 3rd March (03/03) with the number plate. The SA advised to book 15 days in prior, as the bike and number plate may take that long to arrive. We booked the RTR 200 4v with ride modes, black in colour, in the timeline as per their recommendation. How many days did it take you may ask? Two. Two days, and the bike was ready in the warehouse. We tried delaying the delivery until the number plate came at least, to which the showroom didn’t oblige. Getting the bike early might’ve been a pleasant surprise for most, but I was particular on having the delivery on 03/03, which made me a bit disappointed.

On road, in Bangalore, when bought, the total cost came upto 187000, on which we got further discounts of 5000 on account of dad being familiar with the owner of the branch, and a free XPOD helmet.

And with that, on Febraury 20, 2021. ‘Her’ was brought home. I decided to call it her, because while I was being forced to keep a name by my friends, I couldn’t think of a decent one. Eventually I just kept referring to the bike as her.

Was Unfamiliar with the PDI checklist, so I couldn’t do much except for checking for scratches and checking to see if it rides properly. It was only 2 months after the delivery we realised, we weren’t given the first aid kit.

The Number plate came 3 days later, after which a basic pooja was done at the nearest temple.

A small explanation on the Ride Modes

Rain – ABS is set to the highest, Top speed and power are limited to 115 and 17 BHP respectively

Urban – ABS is set a little lower than Rain, but has the same restriction on Top Speed and Power

Sport – Lowest ABS Setting, ABS is at its minimum and full 20.3 BHP at your disposal

The Bike comes with a free 1 year service from TVS and a 5 Year Engine Warrenty as standard. No options were given.

The seat height of 800 mm doesn’t let me completely plant my feet on the ground, but its still good enough to manage traffic. My dad, who is shorter than me voiced concerns of not being able to control properly in start-stop traffic. Pillion comfort is average. A friend told me she found the slightly raised sear height on the bike ‘Intimidating.’

The stock bike didn’t come with much, other than the usual. Windshield holder was later painted, which isn’t seen in the photos.

My initial intended usage was just for the city, a means to commute around the city and to and fro university, until the touring bug bit me.

I was never into Touring as a whole, the concept of bike touring fascinated me, but I never imagined myself doing it. It changed when I saw a touring review of the Apache. The thought of – ‘I want to try that too’ came in.

After Speaking to a few seasoned tourers, I decided the most important thing is safety gear. I was always adamant about having my helmet even if I’m going for a haircut, now it was time for a better one, some gloves, a jacket, pants and shoes.

Gloves – A Pair Picked up on sale from HTRZ Mods, with slide and knuckle protection. Plan to buy full gauntlet gloves.

Touring has been a very enjoyable activity. Visiting different places, with other bikers to see some nice views has been some of the best times of my life.

On Sports Mode, The Bike gives a mileage of 31-35 KM/L at an average cruising speed of 105-115 on Highways. In the City, it returns about 33, although haven’t done accurate Tank to Tank testing. The fuel tank has a 12 L capacity, which should do you well for a 350 KM round trip.

The Bike is an Absolute Joy to Ride in and outside the city. In the city, it has enough power to allow me to safely overtake. On the highway, it has enough power for me to comfortably cruise at 90-100. The most disappointing factor of the bike would be the brakes. Compared to the other bikes I’ve ridden for a short time, the Apache brakes just aren’t there. Not to mention the wobble play on the stock levers are very high, which the service centre downplays as being a ‘feature of the bike.’

With all that said, this isn’t a bike for a seasoned a tourer, but a very good choice for someone who just wants a break 100 KMs away once a month.

It has been about 5000 KM on her and as lady fate would have it, Her and I met with an accident the day my Team BHP application was accepted. On the way to fill petrol, another person hit me from the side while coming on the opposing lane. Three fractures on the foot. Ironically, this happened on the day I was supposed to go buy some Protective Boots.

She is currently in the service centre, being taken care of. This Instance also was the reason that led me to decide on installing a crash gaurd.

I won’t be able to drive for 2-3 months at most, but I can’t wait for the day I can take her out on a tour again 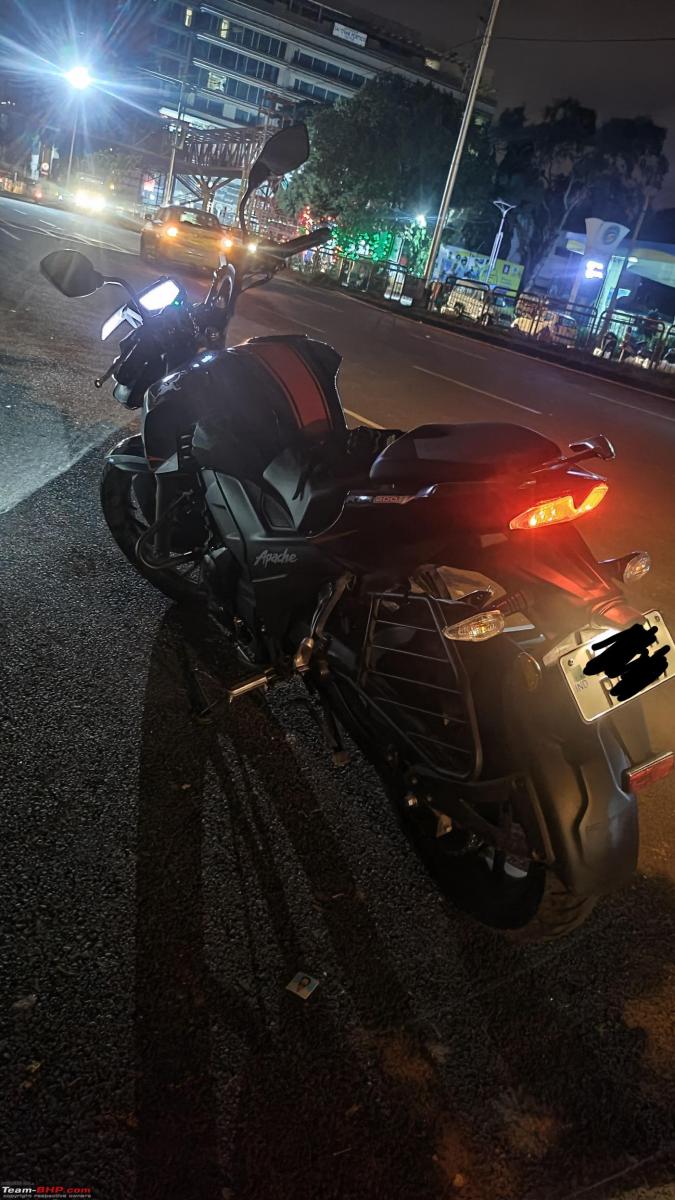 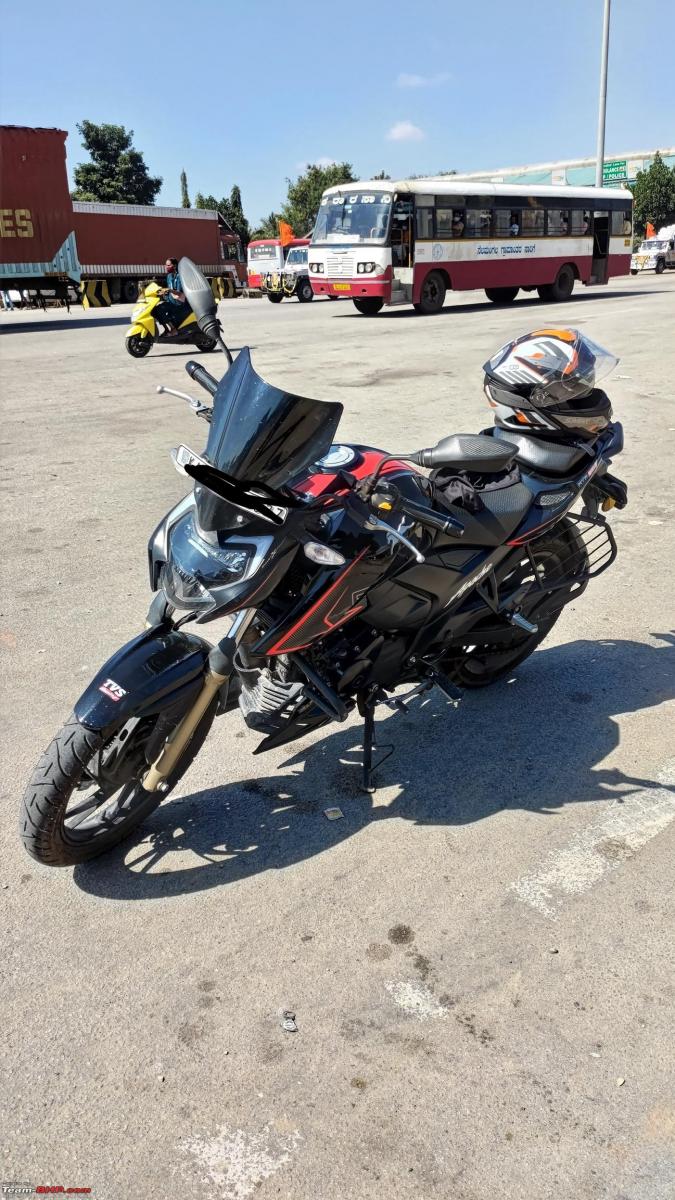