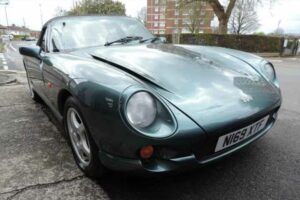 A Blackpool classic – for peanuts

Always wanted a TVR but thought they were out of your price or maintenance budget range? Pay attention then because this could be your big chance. Younger PHers might not know this, but back in the beery mists of time PistonHeads was set up as an online meeting point for TVR owners. Quite a few of those original dudes are still revelling in the unique pleasures of TVR ownership and are still scribbling hard on the forums with insights and info on this fascinating British marque. Not just about the ups, of which there are many given the basic TVR recipe of a powerful motor, lightweight chassis and knockout styling, but also the downs, of which there can also be many.

Back in the early 1990s a friend of mine was interested in buying a brand new Griffith, but his interest fell away like snow off a dyke when he visited the production line in Blackpool and saw some of the, shall we say, rustic build processes for himself. We’re not having a pop here or saying anything that a seasoned TVR fan wouldn’t cheerfully acknowledge. Indeed, for many owners a big chunk of the pleasure they get from their TVRs comes from getting them to where they think they should have been ex-factory.

For these owners, the Peter Wheeler era (1981-2004) is the ‘best’ period. The 1996 Chimaera convertible you’re looking at here is prime Wheeler and, as the £8,995 price tells you, the most accessible modern-era TVR. The Chim got its name from a mythological monster made up from parts of various animals: goat, lion, snake, poodle, stoat, that type of thing. More recently ‘chimera’ has become the word for hybrid organisms containing more than one set of genetic material. Either way it’s a fitting name for any TVR.

There’s plenty that can go right with a Chimaera, including rewarding handling if you know what you’re doing. There’s no traction control or ABS. Driver aids are basically the throttle pedal and the steering wheel. Brawny acceleration is a given though even in a ‘basic’ 4.0 V8 like this. In a car weighing not much over a tonne, 240hp and 270lb ft translates into a 0-60 time of 5.1sec and a 0-100 of 12.5sec, very respectable figures even by 2022 standards.

Needless to say there’s a fair bit that can go wrong. In general however the Chimaera is well liked by the TVR community for its ruggedness and (with the right maintenance) reliability. Here’s an interesting fact. Of the five to six thousand Chimaeras built – Wheeler wasn’t big on paperwork – nearly 4,000 are either still registered for UK roads or, following the typical TVR usage profile of winter storage and summer fun, SORN’d. It’s a remarkable survival rate that tells you a lot about the determination of the TVR community to keep these characterful cars going. Al Suttie’s buying guide and the forum posts attached to it will give you a good overview on the sort of stuff you need to be prepared to do to keep the dream alive.

This car’s MOT history suggests that most if not all of its mileage over the last fourteen years has been accumulated in trips to the MOT station and back, with just 4,000 miles covered since 2006. Low mileages aren’t always desirable of course, and you will see the word ‘corrosion’ a lot in the history, but you might also see a picture of owners – or possibly owner singular – doing their level best to keep the Chim up and together. It seems to have been stored from some point after its 2019 test to last month, when it received a clean pass.

The selling dealer gets good reviews online for his genuineness and fair pricing. You’ll notice he doesn’t go in for flowery prose in his ads. In fact he goes in for no prose at all. We quite like that because it means that you, as an interested party, will need to phone up to know more about the car. In the process you’ll also find out more about the seller, never a bad thing.

Such is the mystical allure of TVRs, the burning desire to buy one can easily overcome the logical part of your brain that is screaming at you not to buy one. Has the time finally arrived to take the plunge? What’s the catch? There’s only one way to find out. Make that call.