Home » Auto News » Truck-Integrated Solar Panels Could Power Tools, Lights And Even The Truck Itself

Truck-Integrated Solar Panels Could Power Tools, Lights And Even The Truck Itself 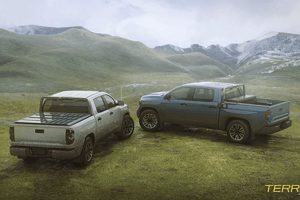 Canada-based Worksport has started work on a truck tonneau cover with solar panel integration, called TerraVis. It’s early days, but the eventual finished article will be designed to fit common GM and Ford models right back to around 2010, plus all new North American-market electrified pickups in development right now, like those from Tesla, Rivian and Atlis.

The panels, spanning the whole top of the tonneau cover, will deliver electric charge equivalent to plugging into a domestic socket, feeding around a kilowatt of power into its own lithium-ion or lithium-iron-phosphate battery. Based on that, on a bright day owners could expect to recoup around 1kWh per hour from the panels. It’s not a lot, but it’s helpful and it’s always on. Live somewhere that’s perma-sunny? Charge will always be trickling in.

The theory has always gone that, if you could put solar panels on a car, you could run it with zero need to plug in, ever. Unfortunately, solar energy conversion isn’t efficient enough to do that; there simply isn’t enough energy hitting a car-sized patch of Earth’s surface for current technology to harvest it and turn it into forward motion in real time.

Give it a few hours of being parked in the sun, though, and Worksport says the panels will contribute around 25-30 per cent of the energy needed for the average truck driver’s commute. In fairness, that’s a decent amount – if the company can pull it off. Alternatively a removable section of the battery pack can be used to power tools and equipment, like saws, lighting rigs or even a mobile fridge, all without having to run an engine.

Worksport is now entering a new round of fundraising from investors. It says that with enough money on board, it could bring the integrated panels to market within 12-24 months.