Travelling between Netherlands & Germany via train & bus: My experience 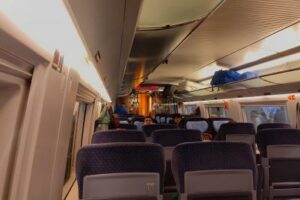 I did not get an authentic high-speed rail experience, possibly because of the track constraints on the route, but I did love the experience otherwise.

BHPian RRA_Blogger recently shared this with other enthusiasts.

Travel fare: €41,90 (Inclusive of all charges), reserved with NS international.

I was fascinated with the ICE3Ms operated by the NS international and DB together, so I wanted to give them a try at least once. Hence, I decided to reserve a ticket in the 2nd class coach of the ICE3M bound to Basel SBB. The nearest boarding point for me was Utrecht, so I had to travel from Eindhoven to Utrecht in a VIRM-4 intercity operated by NS. Since that was pretty much the same experience, I didn’t include the write-up about it. So we shall move over to the experience thereupon.

After a decent breakfast at an Italian restaurant in Utrecht CS, I went to my platform and did some fanning until my train arrived. Upon first sight, Carriage 4653 had the NS logo while carriage 4684 had the DB logo. It was quite a challenge to find out the coach number, as it was shown only on one display per coach and on top of that, it was smaller too. Probably they could devise a better identification strategy, as it was not just me who found it a little difficult, but also the others. There were passengers boarding beyond the waiting time, hence causing a delay upon departure.

Upon entering inside, I observed that the coach was very plush and neat, and the ambience was wonderful. The mild yellow lighting atop the cabin accentuated the feel of the premium cabin. It felt like a first-class cabin, though in reality, it was a second-class cabin. Due to cost constraints, I decided it was enough to try the second class for now.

The seat was very comfortable and had decent leg space. It had a tabletop attached to the back of the seat. The material quality felt to be top-notch as well. Additionally, it is thoughtful of them to include cloth hangers and a top storage deck for bags. Unfortunately, what they missed, were mobile charging units, which were provided only in the first-class coaches (shared between two seats). I am not sure how that turns out to be a first-class facility.

Obviously, the coach was pretty clean. I did not use the WC. Another interesting thing to note was that they provided cappuccino/coffee on the train, which was wonderful (not for me of course as a non-coffee drinker). I am not sure if that was free or comes with a fee. The train clocked a maximum speed of 140 kmph in the Netherlands and 160 kmph in Germany. This was pretty surprising and ironic, but a read led me to the fact that the HSL lines haven’t been much expanded in Germany and most normal tracks only support a maximum speed of 200 kmph, while the trains can actually peak 250 kmph – 300 kmph (operational limit). In terms of smoothness, the coach was pretty well insulated, and there was not much external noise from the track. After Arnhem Centraal, tickets were checked by an officer from the DB.

The view of Arnhem Centraal from the train was so beautiful, and upon crossing the border, it was a drastic shift from the urban landscape to a rustically rural landscape, guessing it was Elten I saw. Also, the roads seemed to be more patched than those in the Netherlands, upon first sight. The first urban landscape was encountered at Wesel. There was an intermediate signal halt enroute Arnhem and Oberhausen, and at Duisburg HBF. In all, I did not get an authentic high speed rail experience, possibly because of the track constraints of the route, but I did love the experience otherwise. The ambience of the ICE3M was welcoming, and surely it would be worth a try for longer distances (for eg Frankfurt). It was a pretty comfortable journey.

I booked the Flixbus for return, since I thought I might need some rest and it would be good if I arrived directly at Eindhoven. But as my exploration concluded well ahead of the departure time, I started getting impatient and thought of booking an earlier bus and cancelling this ride. But I decided not to. I also went inside the Flixbus lounge for visiting the washroom, and the lounge in charge allowed me to visit the washroom though I was short of five cents. It was really a great gesture, and I saw that the lounge was maintained neatly. Shortly after that, I had dinner and waited again. I did quite some spotting again. My bus had arrived by 5.50 pm and the crew was taking a rest. Sharply by 6.35 pm, the crew started the check-in, and I was the first passenger on board. He was friendly and kind towards all passengers, and he told me he knew English, Dutch and German.

Shortly by 6.40 pm, the lights were turned on and the ambience was just enthralling. Be it the quality of the materials, the plush feel of the seats, or the premium wooden and chrome upholstery here and there, all of them felt to be top class. The seat had great comfort, but I could not figure out how to recline my seat (as I did not probably figure out the proper lever), and in the fear of breaking something, I decided to give up on the very process.

I was pretty shocked to find that there was no mobile charger at least above my seat, as against Flixbus’ general display while booking the tickets. However, it had a WC and all other features were there as advertised. But all in all, sans the lack of a mobile charger, the overall upholstery and comfort was just impressive. The AC cooling was optimal and the temperature was maintained at 22 to 22.5 degrees. 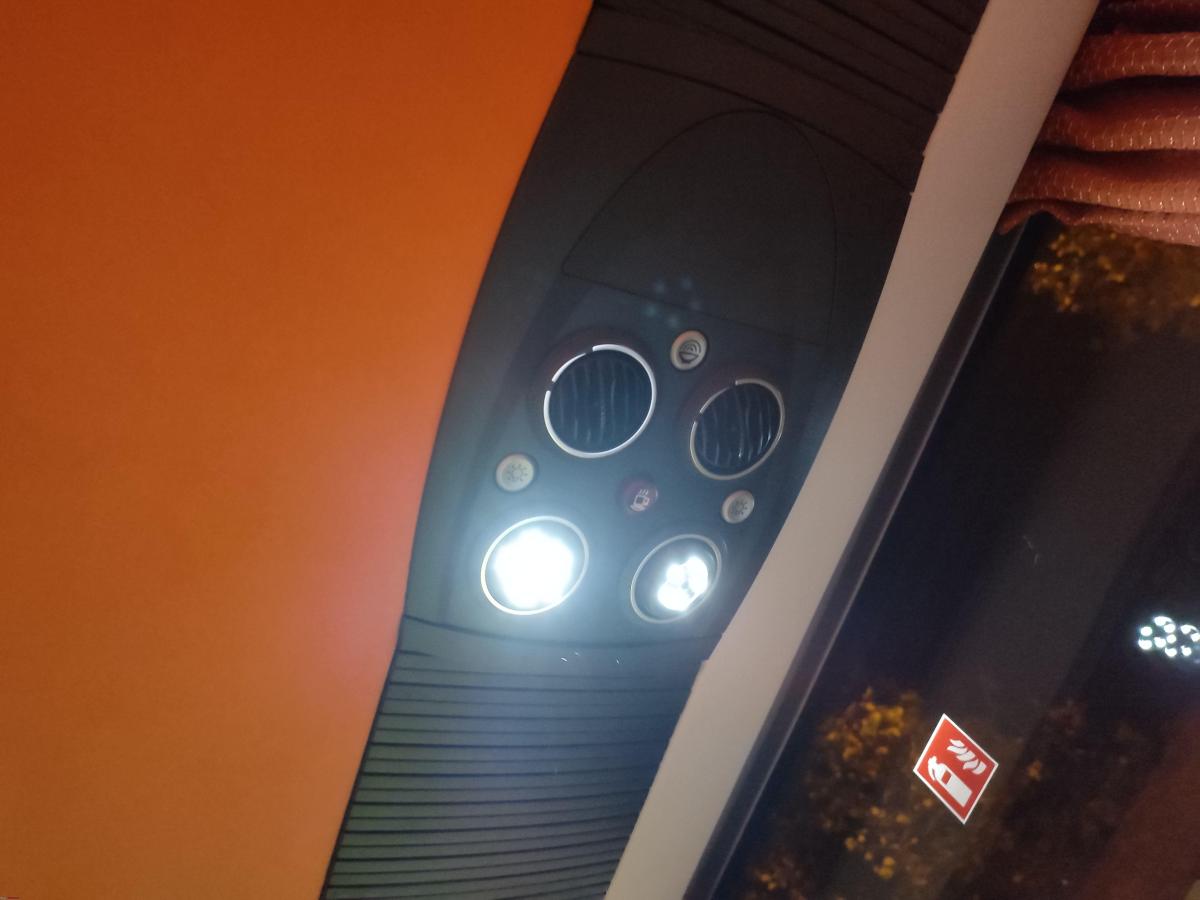 Coming to the driving, it was smooth and relaxed. The master lights were switched off at departure and the night lights, which were in green, were on. The crew decided to play some songs on his mobile through headphones for his entertainment, so at traffic signals, he decided to plug in his headphones and surf for the song. But throughout the process, he was clear not to do it while driving and halted it while driving.

The engine had pretty good power and the pull felt great, compared to the Mercedes Tourismo I travelled in last time, and the AMT felt to be dynamic too. However, I felt a bit of a significant cranking vibration inside the cabin, and after cranking/igniting the engine, it was eliminated. The steering also seemed to be almost as easy to steer as that of a car. But most importantly, at the top speed (limited to 100 kmph) or at the places of speed limit, the crew engaged the cruise control, which really saved a lot of wear and tear on the footpalm that presses the gas pedal. This is a thoughtful feature that can be implemented in India also.

I noted that there was a traffic jam on the Autobahn near Mönchengladbach. I was not sure if it was due to the international border. I had a short nap between Mönchengladbach and Roermond, and hence I missed noticing Roermond. After that, I saw that the route between Roermond and Eindhoven had a semi-rural feel to it – The highway N280 was single laned for approximately 10-15 km and it also touched the outskirts of a town.

The fleet arrived at Eindhoven sharply on time, and I totally enjoyed the journey, be it the view of the German Autobahn, or the small nap I had in between, or the Dutch highways and the semi-rural road I saw en route, or the enthralling ambience and incredible comfort of the coach. This was a good trip with Flixbus.

For those looking for economy in international travels, Flixbus is the better option of the two, and for the timeliness factor, usually the trains are a better choice, but it is sad that there are no direct trains on Eindhoven <> Düsselforf. It needs a transfer at Venlo.

It was an amazing trip again.