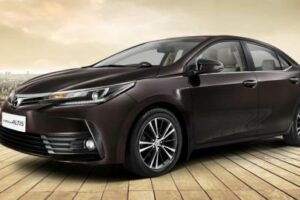 In South Africa, the Corolla Quest comes with a 1.8-litre petrol engine that makes 136 BHP and 173 Nm.

Toyota has filed a trademark application for the ‘Corolla Quest’ name in India. This has led to speculations about the famous badge making a comeback.

The Corolla Altis was discontinued in April last year before the BS6 emission regulations came into effect. At the time, the car was powered by a 1.4-litre diesel engine which was not updated to comply with the new emission norms. This motor produced 87 BHP and 205 Nm. Another reason why Toyota may have decided to phase out the model was its lacklustre sales.

There have been rumours indicating that Toyota might re-launch the Corolla with a hybrid powertrain in the future. Perhaps the upcoming hybrid version could be called ‘Corolla Quest’ in India.

However, in South Africa, the Corolla Quest comes with a 1.8-litre petrol engine that makes 136 BHP and 173 Nm. This engine is mated to either a 6-speed manual or 7-step CVT.