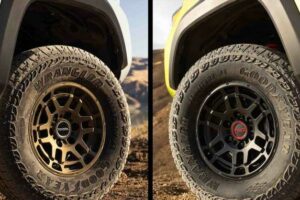 It is now an annual expectation that Toyota updates the TRD Pro versions of its Tacoma, Tundra, 4Runner, and Sequoia off-road trucks and SUVs. Typically, these changes are minor (a new paint color here, a new snorkel intake there), so we’re not going to read too much into Toyota’s release of two photos depicting what appear to be the front wheels of two separate Tacoma pickups. Or should we?

Given the TRD wheel cap visible in one photo, we predict this image previews the latest Tacoma TRD Pro. Nothing special, right? Well … the body is painted a searing shade of highlighter-esque neon yellow—that’d be new to the Tacoma range. Perhaps this will be the 2022 Tacoma TRD Pro’s signature color—replacing or augmenting the 2021 model’s Lunar Rock flat-gray shade.

Speaking of Lunar Rock, that paint color seems to be worn by the other Tacoma that Toyota teased. However, the wheel visible in the photo is painted bronze—or maybe it’s gold—and wears a retro-looking center cap that simply reads “Toyota.” We are speculating wildly here, but this might be some kind of heritage or retro-styled special-edition truck; it isn’t clear whether this Tacoma, too, is a TRD Pro model or if it’s merely wearing TRD Pro wheels with flashier paint.

So, not a lot to go on, but as with most things Tacoma, you can bet the two trucks will be plenty capable of both appearing badass and bringing some trail-ready heat to Toyota’s truck lineup. As Toyota states in its press release about the two pickups, “two new adventure-ready trucks are on the horizon for the mid-size segment-leading Toyota Tacoma. Gear up and get ready!” As for when we should be readying ourselves, and what sort of adventure these Tacomas might be suited to take us on … well, that will have to wait for a mysterious future date.