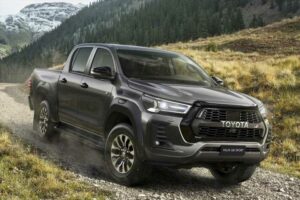 A Dakar-inspired look, suspension upgrades and more for Toyota's new pick up

Do your activities and lifestyle “go well beyond the everyday”? Do you need the “ideal vehicle for adventurous journeys and sporting pursuits”? Ah, well then, you need the Toyota Hilux GR Sport, according to the blurb announcing this new pinnacle of the Hilux range. It’s been created to mark the success of Gazoo Racing in the Dakar Rally, which is currently underway in Saudi Arabia, an event that the Hilux Dakar won in 2019.

The AN120/130 series Hilux already sports several suspension upgrades from its 2020 facelift, including retuned rear leaf springs and revised suspension bushes. On top of that foundation, the GR Sport adds beefier front coil springs and new monotube damper. These feature larger pistons that are better able to deal with high-frequency undulations as well as reduce larger shocks and body movements; they also boast better heat management and damper-oil longevity. The dampers and the front coils are painted red, to add to the visual feast, and Toyota says the changes also improve the steering (both weight and response) and rear grip feel.

The GR Sport is double-cab only. It’s distinguished outside by a black mesh grille with classic ‘TOYOTA’ lettering emblazoned across it, instead of the regular car’s badge – a retro touch that harks back to the fourth-gen Hilux of the early 80s. There are also larger front fog light surrounds, contrasting black and diamond-turned 17-inch alloy wheels (fitted with all-terrain tyres) along with more black detailing to the door mirror casings, side steps, wheel-arch surrounds and tailgate handle.

Naturally, there are differentiating elements on the inside as well. These include new sports front seats trimmed in black leather and faux suede, with red perforations, contrasting stitching and ‘GR SPORT’ branding. That branding is also echoed on the carpet mats, starter button and the driver display. Standard specification includes steering wheel paddle shifters, aluminium pedals, faux carbonfibre trim inserts, a red band across the dashboard and blue ambient lighting in the door panels. Otherwise, the equipment is as per any high-end Hilux, featuring LED headlights, keyless entry, dual-zone climate control and hill decent control.

The 2.8-litre engine (introduced in 2020) remains the same at 204hp and 369 lb ft of torque. It drives through a six-speed automatic transmission and electronic limited-slip diff, and the GR Sport maintains the Hilux’s one-tonne payload and ability to tow up to 3.5 tonnes (braked). The new GR Sport trim is scheduled to arrive at dealers by summer 2022.