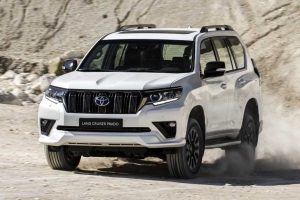 Toyota sells the Land Cruiser Prado in other markets, which is the equivalent of our Lexus GX without the fancy badge and trimmings. Smaller than the Toyota Land Cruiser sold here in the United States, the Prado also offers a diesel engine and different styling cues. Newly refreshed, the SUV gets a sleek Black Pack that makes us wish—even more than we usually do—the Prado would find its way to our shores.

The Black Pack doesn’t put the Land Cruiser Prado into full stealth mode, but it adds a number of dark accents to the exterior and interior. First off, it gets special bumpers with additional aero elements. A dark chrome front grille pairs with black fog lamp bezels, black mirrors, and black door trim. In the rear, the model features a dark rear garnish and clear rear lamp clusters. Black wheels and onyx badging complete the look.

As much as the Black Pack freshens up the SUV’s appearance, we have to admit we wouldn’t trade the Land Cruiser Heritage Edition for it. Carrying over through the 2021 model year, the special SUV features bronze accents on the wheels and interior stitching. It also gets darkened exterior chrome surrounds and trim-specific badging.

Along with the Black Pack, the refreshed Prado receives a more powerful 2.8-liter diesel engine that produces around 200 hp and 369 lb-ft of torque. An upgraded multimedia system is also on the docket and promises faster response times.

Pushing 70, the Land Cruiser is Toyota’s longest-running nameplate. Last year, Toyota announced it sold its 10 millionth Land Cruiser. We hope our Land Cruiser (and the Lexus GX and LX, for that matter) get a real update soon, as the SUV’s underpinnings are quite old.