Toyota Innova Hycross to be unveiled in India on Nov 25 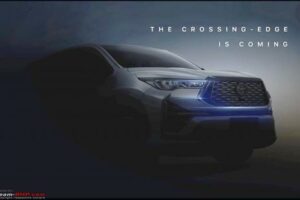 Maruti Suzuki might offer a rebadged version of the MPV as part of its partnership with Toyota in India.

According to media reports, the Toyota Innova Hycross MPV will be showcased in India on November 25, 2022, while its prices are likely to be announced during the 2023 Auto Expo.

The Innova Hycross is expected to debut in Indonesia on November 21, where it will be sold as the Innova Zenix. As per the official teaser, the new model will feature a bold front-end design with a trapezoidal grille and sleek LED headlamps.

The Innova Hycross is expected to use the TNGA-C monocoque architecture as opposed to the body-on-frame construction of the Innova Crysta. It will also switch to a front-wheel drive layout.

Reports suggest that the Innova Hycross will be offered with a 2.0-litre petrol hybrid powertrain, but there will be no diesel engine option. It is also said that Maruti Suzuki might offer a rebadged version of the MPV in India.