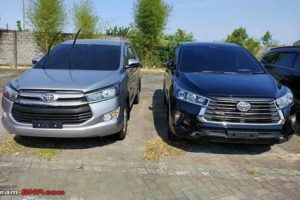 The Toyota Innova Crysta facelift has been seen next to the current Innova. Pictures also reveal the car’s interiors.

New images showing the Toyota Innova Crysta facelift next to the current Innova Crysta have surfaced online. The images also reveal the interior of the car.

The Innova Crysta facelift gets a redesigned front fascia with a chrome frame. While the shape of the headlamp clusters seems unchanged, it gets new internals. The front bumper has also been redesigned. The dual-tone alloy wheels are new as well. At the rear, the car gets L-shaped tail lamp clusters just like the current model. However, the internals have been updated.

On the inside, the G variant of the MPV could get a new full TFT MID and ambient roof light. Additionally, the V variant could get VSC and Smartkey. The images suggest that the facelift version could get new seat upholstery.

In India, the Innova Crysta is offered with a 2.7-litre petrol engine producing 164 BHP and 245 Nm and a 2.4-litre diesel unit that puts out 148 BHP and 343 Nm or 360 Nm depending on the transmission. Both engines come equipped with either a 5-speed manual or 6-speed automatic gearbox.

Thanks to BHPian CEF_Beasts for sharing this with other enthusiasts.