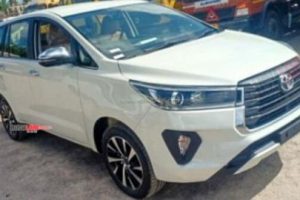 The updated Innova Crysta could be launched this month.

The Toyota Innova Crysta facelift has been spotted at a dealer yard, which indicates that the launch could be just around the corner. In fact, some dealerships have reportedly started accepting bookings as well.

The refreshed Innova Crysta gets an updated front fascia with a faux skid plate that adds a more sporty touch. The new front bumper houses the turn indicators in triangular pods and has circular fog lamps positioned lower down. It also gets new 16-inch diamond-cut alloy wheels.

The rear of the car looks identical to the current model and features L-shaped tail lamp clusters. On the inside, the updated Innova Crysta could get additional features such as an air purifier and 360-degree camera.

The Innova Crysta facelift is likely to be offered with the same engines as before. These include a 2.4-litre diesel producing 148 HP and 360 Nm, mated to either a 5-speed manual or 6-speed automatic transmission. In the manual variant, torque is limited to 343 Nm. The MPV could also get a 2.7-litre petrol engine that puts out 164 BHP and 245 Nm.