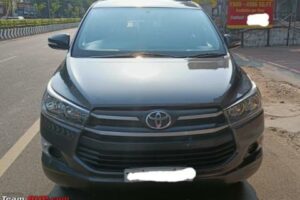 The best fuel efficiency figure we got from the Innova diesel was 14.7 km/l.

BHPian adigup recently shared this with other enthusiasts.

To give some background, we own a Toyota Innova Crysta 2.7 Petrol Automatic (2019) at home, which is mostly driven by my dad for his everyday commute (he thinks it’s the best car on this planet and he can leave anyone behind with the 2.7-litre engine). I am able to get my hands on it at least once or twice a week and I can say that am very much familiar with the car and have been able to take it on family road trips. I love driving the car and revving the 2.7-litre Dual-VVT-i motor (which I later regret seeing petrol prices at Rs 11x.xx).

I have driven a cousin’s 2.4 G Manual, which definitely felt great because you can never go wrong with a diesel Innova. The car never fails to surprise. It feels very lively and reminds me of our old 2013 2.5 VX Innova.

One of my very close friends has a 2.8 ZX AT and while I always got the chance to drive it with him in the city, I never got the experience of the motor beyond 3,500 rpm and 75 km/h. Recently, our group of 4 friends planned a trip from Delhi to Landour and back, we decided to take the 2.8 ZX AT as the other two Innovas in our group are 2.7 ZX AT (mine) and 2.7 VX MT (another friend’s), and seeing the petrol prices and some other factors we didn’t even think of the 2.7s.

Out of 4, the two of us drove and I can clearly say that I got to fully experience the 2.8-litre diesel. The total trip was around 630 km and I drove 300 km which was in Delhi and on the Meerut highway (till Chhutmalpur) and then my friend took over from there. The best part was that since we have a ZX at home, I felt at home driving his car (or like there was no difficulty getting ‘familiar’ with it).

While I always loved the initial grunt and power of the 2.8 on the city, it just felt very bland and unenthusiastic compared to the 2.7 on the highways. The steering felt heavy most probably because of the heavier diesel engine and the engine noise was typical diesel, and I clearly prefer the throaty sound of the 2.7 over that. It definitely felt effortless pulling it from 0 to 60, after which I started missing the 2.7 very much.

In 2.8, I could not feel much of a difference driving the car in Power and Normal mode (Eco was quite significant). The revs are at around 2,000 rpm while the car is at 110 km/h, and it tends to get noisy inside the cabin. It is past 60/70 km/h where the petrol 2.7 gets to show off and really get going. The car isn’t much of a drinker if driven sedately. One can manage anywhere between 8 to 12 km/l.

Overall, I feel 2.7 petrol is far more superior in its ways, and the only reason the 2.8 felt good was:

Getting back to the trip, we managed to get a fuel efficiency of 12.1 km/l (and the highest of 14.7 km/l was seen) with 4 on-board and 4 medium-sized suitcases (the petrol would have returned a fuel efficiency of 10.5 km/l at the max). This also included driving on the hills of Mussoorie in traffic (around 120 km in all). Lastly, I was a little surprised to realise that the diesel Innova gets a smaller fuel tank. I wish Toyota had given it the bigger 65-litre tank in the petrol.