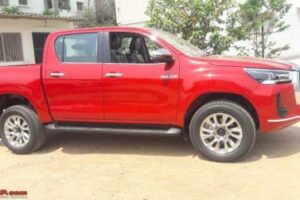 Toyota might announce the official pricing for the Hilux pick-up truck soon.

The Toyota Hilux has been spotted at a dealership, which indicates that the carmaker may have started dispatching the pick-up truck to showrooms across India.

Bookings for the Hilux had opened on January 20, but were temporarily halted. According to Toyota, order books were closed as it was unable to cater to the high demand. Now, that the first units of the Hilux have started reaching dealerships, Toyota might announce the official pricing soon.

In India, the Hilux is offered with a 2.8-litre diesel engine producing 201 BHP (204 BHP – 6MT) and 500 Nm (420 Nm – 6MT). The engine is paired with either a 6-speed manual or a 6-speed automatic transmission. It comes with a four-wheel-drive system with an electronic differential lock, a limited-slip differential and Active Traction Control.