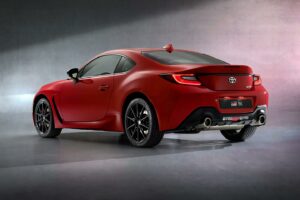 So the GR Corolla isn’t coming to the UK – that’s a shame. But here’s some good news to cheer you up, because the GR86 most certainly is. And the promise of a list price that undercuts the GR Yaris has just been confirmed, too, with the range kicking off at £29,995. Which, in 2022, doesn’t seem an awful lot – have you seen what a Golf GTI costs these days?

Just two models will be offered from launch, reflecting the general (and welcome) simplicity of the model as a whole. The one that’s £29,995 is the manual, then the automatic costs £32,085. That’s it. The standard spec includes a reversing camera, eight-inch infotainment display with smartphone integration, LED lights, heated seats, auto high beam and lane keep assist. With the car not technically on sale until next week, Toyota hasn’t yet shared anything about options, though it seems unlikely that there’ll be much on the list to fundamentally alter the 86; we’re not expecting a Circuit Pack or similar, put it that way.

Rest assured we’ll update this story when orders do open. Given it’s already been made clear that the new GR86 will only be on sale for a couple of years, and with its scintillating potential already halfway confirmed by last year’s prototype drive, a £29,995 RRP sounds like the cherry on top of another very tasty GR cake. First deliveries are expected in July. By which time you’ll have forgotten all about that Corolla…