Toyota GR86 sells out in 40 minutes 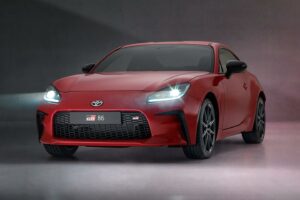 We said the GT86 replacement was good. You didn't need telling twice

So there we are. Of course we knew people would be excited about Toyota’s latest rear-drive coupe – the GR86 is, after all, the follow-up to a flawed masterpiece, and it arrives in the goodwill wake of the intensely popular GR Yaris – but we didn’t expect this. Having confirmed a very reasonable starting price of £29,995 just last week, and officially going on sale on Wednesday, the UK’s production quota is already gone.

A spokesman for Toyota confirmed it: “[The] GR86 went on sale at 10am. The UK’s entire current allocation of cars was sold out in a little under 40 minutes.” This will not be news to anyone with their nose pinned to the appropriate forum thread (the pricing story is at 867 comments and counting) where PHers were quick to announce their dismay once the chance to click ‘Buy’ on Toyota’s website was replaced with an offer of a place on the waiting list – but for those of us slightly less invested, it was a surprise.

Now, it should be noted that we’re not talking about a colossal production run by any means, and doubtless Toyota’s announcement that the car will only be sold for a limited period has helped piqued buyer interest – but, nevertheless, finding a customer for every car almost immediately when you’re allocating hundreds rather than a handful is impressive going. Especially when you consider that its predecessor (a car that the new GR86 still mimics in many fundamental ways) was never a smash hit.

Obviously the speed at which the sold out notice went up suggests that there will be plenty of disappointed would-be buyers out there (some of them potentially not even on PH) – and Toyota explained to us that all hope might not be lost if you were still keen enough to put your name down promptly even with the chance to leave a deposit gone.

“Customers who were not able to order on Wednesday have been offered the opportunity to join a waiting list in case of cancellations. That will be operated strictly against the time customers tried to order, so on a chronological basis.”

For everyone else, we will have to cling to the notion that the UK’s appetite for the GR86 is now so incontestable that Toyota will be forced to consider supplying more RHD cars to satisfy it. Certainly you can expect the appropriate people to be making the nation’s business case based on Wednesday’s performance. And if they need any help, we’re more than happy to provide a follow-up to our GR Corolla petition. There are more than 800 names on that. How many more would be required to steer another cargo ship in our direction?