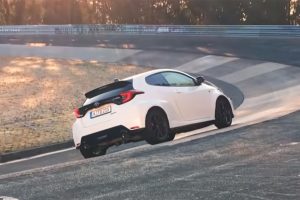 We've seen the Yaris do almost everything now, apart from lap the Nordschleife really quickly – get comfy…

The GR Yaris is a very special offering in the fast car landscape – and particularly the hot hatch arena – for a number of reasons. Not many cars these days, and precious few at £30k, can claim a bespoke powertrain and architecture as well as genuine homologation pedigree. But the GR also stands out for having been launched without a Nurburgring lap time attached to it. For hot hatches especially, that badge of honour seems almost a prerequisite these days. And even if the Gazoo Racing Yaris is pitched more as a rally car for the street than a roadgoing race car, the prospect of seeing just how quickly it might go around the world’s most famous circuit is impossible to ignore. You want to know too, right?

We’ll leave it to the video to divulge the exact time, but it’s interesting to note the Toyota’s speed compared to others. It matches the old FK2 Civic Type R to the second, both sportauto tests with Christian Gebhardt driving. It’s also an identical lap time to that achieved by the magazine a decade ago with a BMW 1 M Coupe. The Yaris was also within a second of Range Rover’s own time for the Sport SVR. There’s certainly no doubting the GR’s potency amongst senior company

As for the actual lap, it’s much as we’ve come to expect from these videos and this car. Commitment is enormous, the Yaris gamely holding on through the middle and exit of corners despite the protestations of the tyres. The driver is kept busy with the manual gearbox and is perhaps perched a little too high; perhaps what’s most notable, in fact, is the GR’s braking. Both outright power and stability seem exceptionally good in the big stops for a car with such a short wheelbase. To be frank, annoying hazard lights aside, the Yaris looks an absolute hoot as a track car.

Remember, too, this is just the start. It seems there’s not a tuning company anywhere in the world that isn’t fiddling with a GR Yaris, striving to make it go, stop and turn even better. Which is exciting. The race to sub-eight is on..