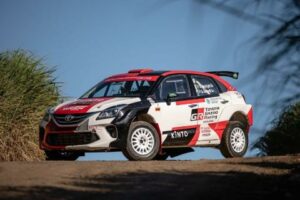 The Toyota GR Starlet rally car is based on the pre-facelift Glanza.

Toyota Gazoo racing of South Africa has modified a Glanza hatchback into a rally car. It is called the Starlet rally car, and it’s based on the pre-facelift version of the Glanza.

The rally-spec Starlet might have a familiar face, but underneath the bodywork, it’s a completely different animal. At its heart is a 2.0-litre turbo-petrol engine that makes 261 BHP and 324 Nm. It also features a sequential gearbox and an all-wheel-drive system. That’s another major difference between this car and the one you see in Toyota showrooms in India.

The Glanza-based rally car made its debut at the Cape Overberg Rally in the hands of driver Guy Botterill and co-driver Simon Vacy-Lyle. It will also compete in the Secunda Rally on June 10.