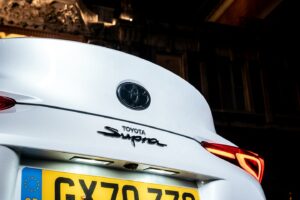 Good Friday gets even better!

Everyone wanted to like the A90 Toyota Supra. There was the name, of course, but also the incredible design, the straight six power, the promise of perfectly balanced handling… and so on. But it would be fair to say the GR Supra never quite gelled as a driver’s car, whether with a 3.0-litre or 2.0-litre engine. Now there’s a very significant development that will undoubtedly help its cause with enthusiasts: the Toyota Supra will get a manual gearbox once more.

A brief press release stated that the gearbox is coming soon: “Developed to meet the demands of driving purists, the Toyota GR Supra Manual Transmission has been engineered to offer enthusiasts something that is closer to the Gazoo Racing DNA and will enhance the driving experience.” Which is exactly what the slightly aloof, slightly too refined A90 has always needed. The news gets better, too, as the Supra won’t just be borrowing some knuckly BMW manual, either. For a car that – let’s be honest here – won’t sell in huge numbers, an all-new transmission, “tailor made” for this installation no less, is a big deal. And a properly cool concession from Toyota, a company that seems to be on a role with these things of late. “Toyota Gazoo Racing sports car customers and fans have spoken and we’ve listened”, added the press release. So it really is always worth making your opinion known!

Though there isn’t any further information about the manual Supra as yet, one key detail has been announced – the red ‘Supra’ badge on the boot will mark out the manual. For the fellow nerds out there who know what they’re looking at, it’s another welcome touch.

Toyota says more will be announced about the car in the coming weeks. As if the GR86 wasn’t exciting enough! And if customer demand really can make the impossible possible, perhaps there’s still hope for the GR Corolla…