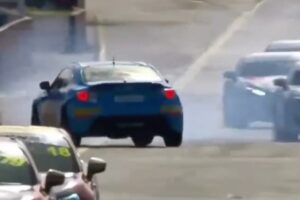 If there ever was a perfect ‘no, no, no, no – YES!’ moment, this is it. A video is doing the rounds on Twitter of a Toyota 86 driver who spins out during the last lap of a TGRA 86 Series race and manages to skilfully save it.

Racing driver Bailey Sweeny comes up the main straight in fifth place at Sandown Raceway entering the final lap of the race, when another driver’s car clips him from behind, sending him into a spin off to the side of the track and facing the wrong way.

At this point you’d be forgiven for thinking it was game over, but whether down to pure luck or rapid reaction speeds (probably a mixture of both), Sweeny performs a ninja-quick J turn and ends up facing the right way, seemingly without having lost any momentum in the process and managing to avoid hitting any other racers. It’s almost like he pushed the ‘rewind’ button in Forza.

Sweeny then goes on to finish the final lap of the race, no doubt full of adrenaline and with an understandable dose of road rage directed towards the opponent that clipped him – the commentators even note how angrily the racer drives for the rest of the lap.

The racer entered back into the race in 12th place and managed to overtake another competitor during the final lap for an 11th-place finish – although that’s a way behind where he was in 5th before the incident, it’s much better than finishing last at the side of the track…