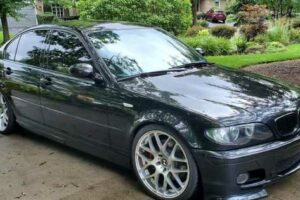 If you want to go fast in an E46 BMW 3-series, the solution is simple – you buy an M3. There are plenty around, and as far as M cars go, they aren’t too painful to keep going. But if you’re after a more leftfield solution, allow us to present this 330i.

It’s off to a good start, being the ZHP edition. This North American market exclusive model features bespoke camshafts giving a 10bhp increase from the M54 inline-six, along with new springs, dampers and anti-roll bars. It sits a little lower than a normal 330i and has increased negative camber. Sounds like the ideal base for more power, which this particular ZHP has in spades.

The E46 has been fitted with an ESS ‘TS2’ twin-scroll supercharger kit, something that’ll currently set you back about $7000. Not exactly a cheap upgrade, but it has a dramatic effect on performance, raising the stock 235bhp figure to more around 350bhp. To enhance things further, there’s a methanol injection system on this 330i.

There are plenty of tweaks away from the bonnet, too. All that extra shove goes to the road via a six-speed manual gearbox and a limited-slip differential borrowed from an E46 M3, while BMW specialist UUC supplies its performance clutch and flywheel.

It sits lower on KW V3 coilovers, but not excessively so. On the chassis side of things, there’s also a front strut brace and 19-inch VMR V710 wheels wrapped in Michelin Pilot Sport 4S tyres.

The changes continue inside, where you’ll find Defi boost and oil pressure gauges plus Recaro Pole Position bucket seats finished in leather and Alcantara. The original buyer did a decent job of optioning up the cabin, adding aluminium trim, climate control and a Harmon Kardon sound system.

At the time of writing the bidding on Bring a Trailer is at $10,000 with six days to go. It should go for around double that price, as this very ZHP was auctioned on the platform at the beginning of the year for $18,950. That’s around the starting point for a decent E46 M3 in the US.

The Highland Park, Illinois-based current owner is selling up after a short spell due to a change in circumstances. Plenty has been done to the car in that time, including a repair of the methanol system, fluid changes, and a refresh of both the tyres and brake pads.

Tempted? Or would you rather go for an M3?