Home » This Self-Transforming, Voice-Controlled Optimus Prime Is Beyond Epic

This Self-Transforming, Voice-Controlled Optimus Prime Is Beyond Epic 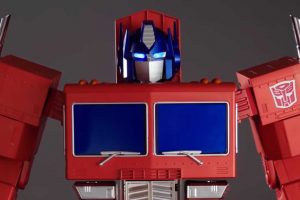 It’s a 19-inch-tall transforming semi-truck, and you can buy one.

There is no level of awesomeness that exists beyond what you see above. Yes, Motor1.com is staffed with pop culture nerds of multiple generations, but this transcends all of that. This isn’t just Optimus Prime, the epic leader of the Autobots who transforms from a bitchen semi-truck to the toughest robot in the universe. This is a legit robotic Transformer that walks, talks, and yes, transforms through either voice command or radio control.

It comes from the tech-savvy minds at Robosen Robotics, and it’s not some flash-in-the-pan idea. It was actually the product of more than 11 years of research and development and consists of over 5,000 individual components. Among them are 60 microchips that control 27 small motors, allowing Prime to not just drive in truck mode and transform into a 19-inch-tall robot. He also walks around, pivots, and does freaking hero poses because that’s what Prime does. He also talks, and the voice is spot-on because none other than Peter Cullen – the original voice of Optimus Prime – is doing the talking.

Controlling Robosen’s Optimus Prime happens two ways. A smartphone app functions as a direct radio control for everything. Or, you can nix all that hands-on stuff and just tell Prime what to do. It’s filled with pre-programmed commands for everything from moving to talking and transforming, which curiously is done not by saying transform, but convert. We aren’t sure what’s up with that, but you can tell him to roll out. And you know what happens when you say that? He transforms and rolls out like the boss that he is, just like he did back in the 1980s. How cool is that?

Fortunately, this isn’t just some one-off thing. Robosen struck a deal with Hasbro to bring their mechanized Prime to market, and the reveal took place just a few days ago during the Hasbro Pulse Fan Fest. It sells for $699, and pre-orders are now open at Hasbro Pulse. Availability isn’t yet known, but we’re told it will be a limited edition offering. Is it worth $699? We’re very keen to get our hands on one to see for ourselves, but the video at the top of this article certainly has us ready to kick some Decepticon tail to get one.

“We are thrilled to collaborate with Hasbro and look forward to ushering in a new standard of robotics with the most advanced Transformers robots for consumers ever created,” said Sean Tang, director of Robosen USA. “The team is working hard to deliver an amazing user experience for fans of this esteemed franchise and produce Transformers that will be a premium addition to their collection with its superior functionality.”