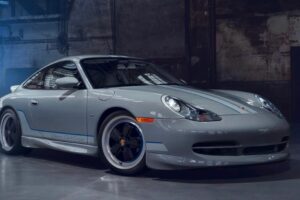 Porsche fanatics, brace yourselves: a one-of-a-kind, retro-inspired 911 has been revealed by Porsche, and it could be the most desirable 996 we’ve ever seen. Built upon a neglected 911 Carrera from 1998 from Virginia, the restomod, dubbed the Classic Club Coupe, is the latest Porsche to be made as part of the German car maker’s Sonderwunsch project.

The car was sent to Stuttgart for a two-and-a-half-year restoration, and the final product is a mouthwatering prospect. The unique vehicle features a bespoke double-dome roof, a handmade ducktail spoiler and a glorious 3.6-litre flat-six engine from the 996 GT3 producing 376bhp – up from 300bhp – with a manual gearbox from the same model. Precise performance details are yet to be announced, but a 0-62mph time of 4.5 seconds and a top speed north of 180mph are expected.

On the exterior, the 911 Classic Club Coupe has been painted in Sport Grey Metallic coupled with Light Sport Grey stripes running from the bonnet to the spoiler and above the door sills. Porsche geeks will recognise the iconic paint job, which has taken inspiration from the 2010 911 Sport Classic.

The retro ride sits on blacked-out 18-inch forged Fuchs alloy wheels, while the interior is finished in corresponding black leather. The seats are upholstered with a black and grey Pepita houndstooth pattern, and interior details are finished in Club Blue – the signature colour of the car’s commissioners – the Porsche Club America.

Despite the car’s retro-inspired appearance, the Classic Club Coupe has been installed with the Porsche Classic Communication Management Plus infotainment system, which features smartphone connectivity using Apple Carplay and Android Auto.

Porsche secretly tested a prototype of the 911 Classic Club Coupe at racetracks in Italy, Spain and Germany to get the car performing at its best. However, the test car has now been dismantled to preserve the final vehicle’s one-off status.

Over 175,000 examples of the 996-generation 911 were built between 1997 and 2006, and it’s often the butt of enthusiasts’ jokes, because it marked a move away from air-cooled engines and ushered in the polarising ‘fried egg’ headlight design. So, the main question is – is this the best of the bunch? We think it might be.