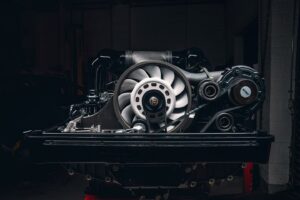 Those keen on their restomodded 911s will know of the name Theon. The Oxfordshire-based company has been delivering bespoke commissions from 964-era 911s since 2016; the obsession with backdating shows no signs of abating. Now Theon is offering a unique proposition in the arena, with a new supercharged engine for its next car.

Beginning with a rebuilt 964 3.6-litre flat-six, Theon has now added a Rotrex centrifugal supercharger and water methanol injection. Not that the ‘charger is an obvious addition, nestled away in the spot where the air-conditioning unit once lived. Additional bracketry (on top of those once used for the A/C) keeps it secure, with water methanol injection negating the need for an intercooler or extra intakes – given how crowded a 964 engine arrangement is as standard, there isn’t room for bulky cooling systems. And nobody would want to spoil a 964 with gaping grilles.

That’s the Theon approach, which it calls ‘OEM+’ and extends to the 3D-printed carbon parts for integrating the methanol, motorsport wiring and coil packs instead of distributor caps. In their own words, the engine bay “has had everything non-essential removed in the pursuit of lightness, purity and practicality.” When an engine can look this good out of the car, you sense the builders might be on to something.

So it looks nice, but the performance potential is even more exciting. With 450bhp (or 456hp) and 369lb ft in a car as small and light as an early-90s 911, it should be the fastest thing 964-shaped this side of a Singer DLS. Moreover, Theon has paid particular attention to drivability. A supercharger of course ensures response that a turbo can’t offer, with the promise of an engine that offers “real-world tractability and spellbinding top-end performance”. Though a whine is said to be present, Theon promises the flat-six growl dominates, and both 996 and 997 911 GT3 were benchmarked for power delivery and experience. Which are pretty good places to start for 911 excitement.

The new engine has been built in collaboration with brand expert Nick Fulljames, who added: “The engine is superbly robust and provides the ideal building block upon which to create additional performance… Porsche built this engine with that flexibility engineered in, in the first place, as it was originally homologated for racing purposes, and so, with the application of modern technology, it’s perfectly adaptable to receiving large power increases.” A fully rebuilt gearbox and a new limited-slip diff should help getting all that extra power to the road.

Though Theon will continue to offer its 3.6-, 3.8- and 4.0-litre naturally aspirated cars, the appeal of the supercharger is plain to see. If all goes to plan, it ought to deliver increased power and torque without compromising on throttle response, drivability, or sound, which sounds like a win-win all round. ‘Sympathetically supercharged’ is how Theon puts it, and who wouldn’t be intrigued by a lovingly restored, tastefully optimised, and sympathetically supercharged 964? We’ll leave the last word to Theon founder Adam Hawley: “With obsessive attention to detail and state-of-the-art technology, we elevate the Porsche 911 experience to another level for our customers, applying that approach to every part of the car from the exterior to the interior and the engine – the very heart of the car.” The supercharged commission is due in the next few months, which means a bit more time to rustle up the £300k a Theon car starts at…