Home » Auto News » The Wait Is Almost Over: 2023 Civic Type R To Be Revealed Next Week

The Wait Is Almost Over: 2023 Civic Type R To Be Revealed Next Week 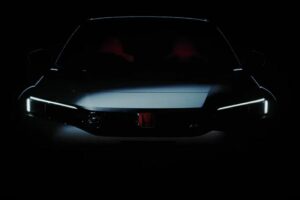 Here’s a new video teaser of the upcoming all-new Honda Civic Type R. Honda is still yet to fully reveal the car without camo and in daytime lighting, but the video includes shots of the sleek Type R’s headlights in the darkness before a final frontal shot where a ray of light passes over the car revealing more of its details. Text at the bottom of the screen then announces the date for the final full reveal which will happen on 20 July at 7pm US Pacific Time (that’s 3am on 21 July for Brits.)

Honda had previously shown the Civic Type R hidden under a camouflage wrap, but as the ray of light passes over the Type R in the closing shots, we can see it slightly in Honda’s iconic Championship White colour scheme – one which is reserved only for its performance models.

The wrap used on the car in previous teaser images was pretty cool itself – it was made up of a bunch of red Rs, and silhouettes of this car’s predecessors. There are EK9, EP3, FN2, FK2 and FK8 Civic Type Rs dotted all around the thing. It’s a nice nod to the Civic Type R’s near-25-year history.

Happily, the key details are pretty well known at this stage. Although early rumours suggested the use of a hybrid powertrain, we’re now fairly sure the car will adopt a revised version of the FK8’s 2.0-litre inline-turbo engine, which dates back to the earlier FK2. This will provide over 300bhp and will still be front-wheel-drive – Honda set a FWD track record at Suzuka with the new Type R back in April.

Despite the camo used in earlier shots, we can clearly see this is going to be a cleaner-looking car than the FK8, thanks in no small part to the 11th-generation Civic adopting far less fussy styling than its 10th-gen forebear. The Type R certainly hasn’t gone soft on us, however, with Honda fitting a prominent rear wing, blistering the wheel arches significantly and stuffing suitably massive wheels with Michelin Pilot Sport 4 S tyres in at each corner.

What do you think?