The Volvo Cyan P1800 Is A 990kg, Race-Engined Continuation Beauty 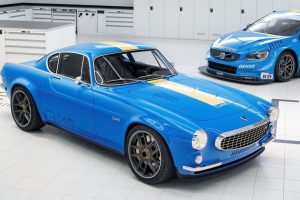 Gorgeous though the old Volvo P1800 way be, it’s unlikely to offer a particularly thrilling driving experience. We are, after all, talking about a near-60-year-old car, the most powerful version of which produced 130bhp.

But for anyone (with buckets of spare cash) wanting those looks with more dramatic performance, Cyan Racing has an answer. Geely’s motorsport arm – formerly known as Polestar – has completely reworked the gorgeous 60s coupe into a pared-back sports car weapon.

The car you see here uses a 1964 P1800 as a starting point, but with significantly redesigned carbon fibre bodywork allowing for a wider track, bigger wheels, a repositioned greenhouse and more. Weak points in the structure have been strengthened with additional steel and yet more carbon.

Cyan’s engineers thought about dropping in either the ‘Red Block’ or ‘White Block’ legendary Volvo inline-fives, the S60/V60 Polestar’s inline-six, or even the modern inline-four used in current Volvo products. In the end, Cyan went with something arguably better than all of those – a racing engine from the WTCC title-winning Volvo S60 TC1.

The turbocharged inline-four is good for 414bhp and 336lb ft – plenty considering the Cyan P1800 weighs a paltry 990kg. The response from the four-pot is said to be similar to a naturally-aspirated unit, with the rev limiter not coming in until a zingy 7700rpm. Power is sent rearwards via a five-speed Holinger dogleg manual gearbox and a mechanical limited-slip differential.

Thankfully, there’s no more live rear axle, since Cyan has switched the rear to an independent setup. There are now double wishbones all round with aluminium uprights and two-way adjustable dampers.

18-inch forged wheels live in each of the upsized wheel arches, wearing P Zeroes measuring 235/40 at the front and 265/35 at the rear. Under the new rims you’ll find four-piston calipers squeezing 362mm discs. There’s no ABS or traction control – it’s all on you.

The starting price for the restoration and modification process is $500,000, Cyan says. The company doesn’t have a specific production number targeted, with all cars built on customer request.