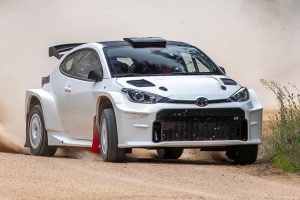 After renders were released four months ago, the partnership between Toyota and Neal Bates Motorsport has finally unveiled the finished product, which will make a race debut next month. Known as the GR Yaris AP4, for the race category known as Asia-Pacific 4WD, it’s essentially a normal GR Yaris with hefty tweaks to meet the series rules.

AP4 racing is very similar in spec and rules to the Rally2 and R5 classes in the second tier of the main WRC field. The doors and roof of the standard car have to be maintained while any other bodywork can be modified. Meal Bates Motorsport will fit fibreglass bonnets and tailgates to its two ARC entries, along with Perspex windows.

The GR Yaris already uses aluminium doors and a carbonfibre roof, giving a competitive weight advantage. The cars will weigh in much lower than the 1230kg minimum, which means the team can use ballast in any way they see fit to bias the handling for specific courses while staying legal.

As for the engine there’s an air restrictor and a turbo limited to 1.5 bar maximum pressure, with a bespoke exhaust manifold. The block, head and inlet manifold are standard but maximum power is set to exceed the standard car’s 257bhp.

Sending power to the corners is a Sadev six-speed sequential gearbox running ratios chosen by Neal Bates Motorsport. As per the regulations, torque is driven evenly between the axles. Extra bounce is provided by longer suspension towers linked to Murray Coote Australia dampers with 265mm and 280mm of travel at the front and rear.

According to Bates himself, the fact that the GR Yaris was designed for motorsport in the first place has made his job a lot easier. He said:

“One of the things that is fantastic about this car is that it was designed for rally conversion and is very low weight to start with. Together with the compact turbo engine and all-wheel drive system, the GR Yaris is a great base car compared to what we have worked with previously to create rally cars. ”

The cars, driven by Bates’ sons Harry and Lewis, will debut at the Netier National Capital Rally in Canberra on 9 April. The three-day event will finally give the Toyota engineers chance to enjoy the GR Yaris as they intended, and to see what might have been in the WRC.