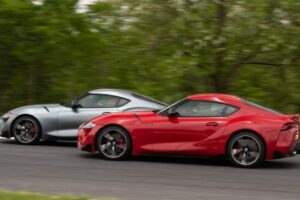 There’s no technical reason why the Toyota GR Supra can’t have a manual gearbox. The range’s BMW-built ‘B58’ straight-six and ‘B48’ inline-four engines have been paired with six-speed manual transmissions before, and Supra assistant chief engineer Masayuki Kai even admitted a few years ago that stick shift had indeed been developed for the sports car.

At the time, Toyota hadn’t decided whether or not the demand was worth the outlay of bringing a manual Supra to market, but fast forward to 2022, and it seems the Japanese company has. The conclusion? A ‘yes’, thankfully.

Citing a source within Toyota’s US dealer network, The Drive reports that a three-pedal Supra is “confirmed,” and could launch as soon as this year. What’s more, it’s said the six-speed ‘box will be available on both the 2.0-litre and 3.0-litre versions of the car. Previously, it was rumoured that only the smaller-engined Supra would be so lucky.

A prototype manual Supra was shown at a dealer event in Las Vegas last year, the source claims, alongside the incoming GR Corolla.

In an official capacity, Toyota is neither confirming nor denying. When contacted by The Drive, the firm’s US press team declined to comment. Meanwhile, Car Throttle approached Toyota GB with the report and received a similar response.