Home » Auto News » The Small Crossover Has a Name: Welcome to Taos

The Small Crossover Has a Name: Welcome to Taos 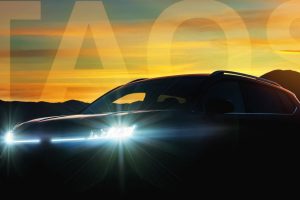 Volkswagen’s upcoming compact crossover finally has a name and it’s Taos. Although Volkswagen has yet to reveal the full vehicle, the name was specifically chosen for the American market.

“We’re thrilled to announce the name for the newest member of the Volkswagen family,” said Hein Schafer, Senior VP for Product Marketing and Strategy. “It was important to choose a name that really embodied the nature of the car and the town of Taos, New Mexico was a perfect fit. It’s a small city that offers big things—from outdoor adventure to arts and design and great cuisine.”

The town gets its name from the Taos Pueblo, a community with a thousand-year history. As one of the oldest continuously inhabited communities in the US, the pueblo has been designated a UNESCO World Heritage Site. As of 2006, about 150 people live in the historic complex.

About a mile south of the pueblo, the town of Taos serves as evidence of how hard European settlers have tried to break that thousand-year history of habitation. The town is founded on a fortified plaza built in 1795, but the history stretches back to 1540 when waves of Spanish soldiers began making incursions into the land. Through military aggression and cruelty, the colonizers kept control over the area and beat back several revolts, cutting off the feet of pueblo people as retribution in one case, and eventually pushing many pueblo peoples off the land.

The town of Taos is today home to about 5,700 people and the name comes from the Taos word meaning “place of red willows.”

More relevantly to Volkswagen, Taos was also the home of John Muir. The engineer turned mechanic wrote the legendary “How to Keep Your Volkswagen Alive: A Manual of Step-by-Step Procedures for the Compleat Idiot.” First published in 1969, it was illustrated by another Taosian, Peter Aschwanden.

Smaller than the Tiguan, the Taos will be part of Volkswagen’s “doubling up” strategy that aims to grow the brand’s SUV portfolio in the US. It will be based on the same MQB platform as the Tiguan (and the Golf and the Atlas and the etc) and therefore will have access to the same family of small-displacement four-cylinder engines.

Volkswagen promises that it will deliver “excellent fuel economy, and great packaging, as well as advanced infotainment and driver-assistance features.”

The Taos will be fully revealed on October 13.