Home » Auto News » The Rotary Suzuki RE5 Was One of the Smoothest Motorcycles Ever. Too Bad It Failed

The Rotary Suzuki RE5 Was One of the Smoothest Motorcycles Ever. Too Bad It Failed

The world’s first Wankel-engined motorbike was the air-cooled Hercules W-2000. Fellow German DKW, England’s Norton and Dutch Van Veen also produced rotary motorbikes, yet on the Japanese side, only Suzuki was bold enough to put the technology into series production. What’s more, Suzuki came up with a complex water-cooled powertrain with double-walled exhausts and a massive radiator to keep the rotary’s heat under control, on a bike that also featured elements designed by Giorgetto Giugiaro. The result was unconventional, expensive for its performance, and probably the smoothest riding motorbike ever produced in volume.

Unfortunately, with that volume staying very low in 1975 while warranty claims just kept piling up, the rumor is that out of disgrace, Suzuki dumped all unsold RE5s and their spares into the seas just off the Japanese coast, immediately abandoning rotary development to focus on four-strokes instead. Today, finding a good one is not easy, since the ones they sold were either used for as long as possible or discarded with just a few rides to their credit. No regular dealer had a clue how to work on Wankels, and with the oil crisis taking its course, an expensive Japanese bike returning only 25-30 miles per gallon while consuming quite a lot of oil made no sense in America. 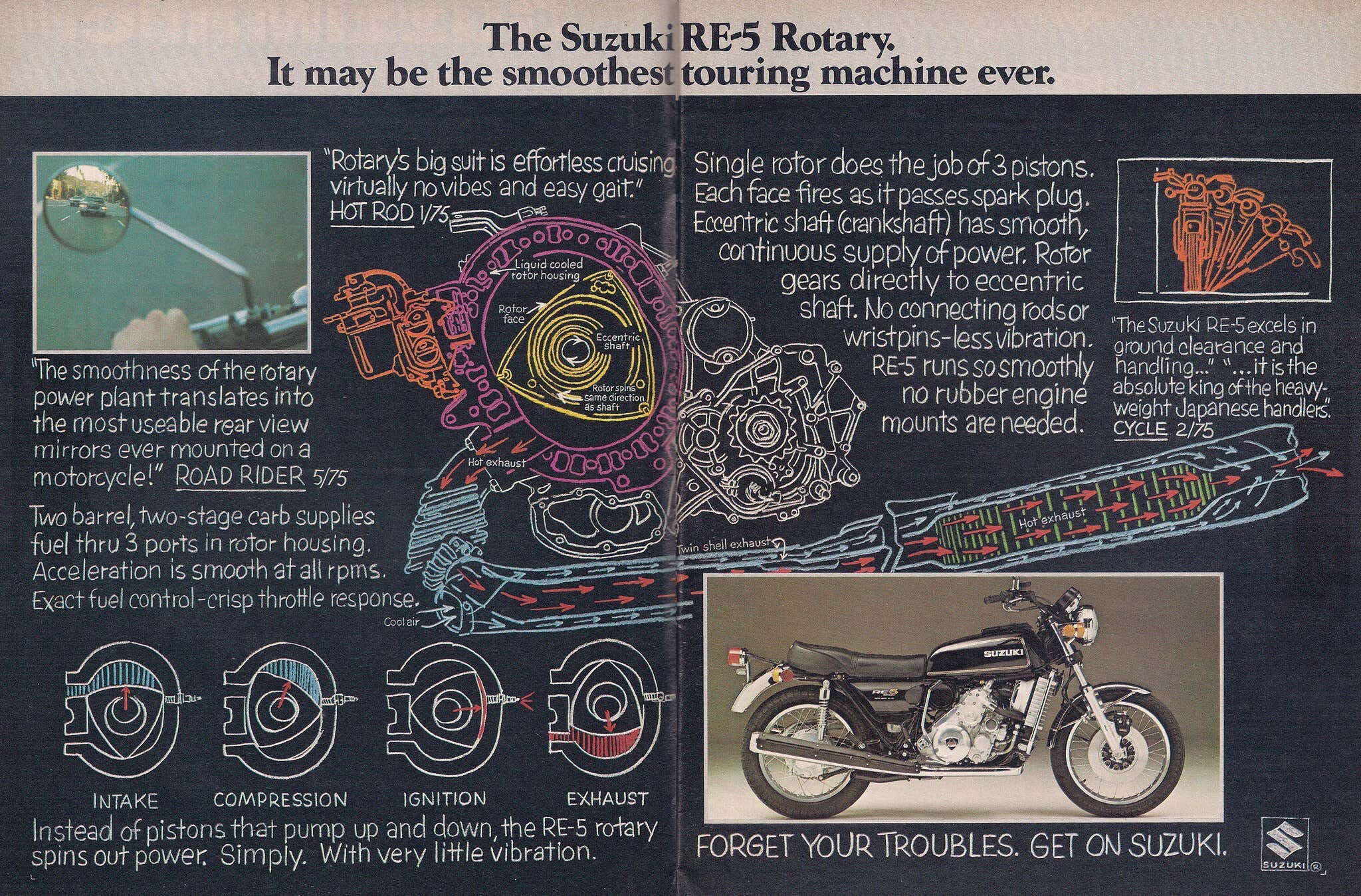 The RE5 got plenty of praise from the press for its linear power delivery and ride smooth enough for all sorts of cross-country adventures. With the equivalent of 500cc, the rotary engine produced 62 horsepower, sent through a five-speed gearbox. Weighing 573 pounds with four and a half gallons of fuel in the tank, the RE5 could do 110 mph without lacking top end torque. It also came with a kickstarter, dual brake discs at the front, and a heat shield on the exhaust, so that Suzuki could avoid certain lawsuits. 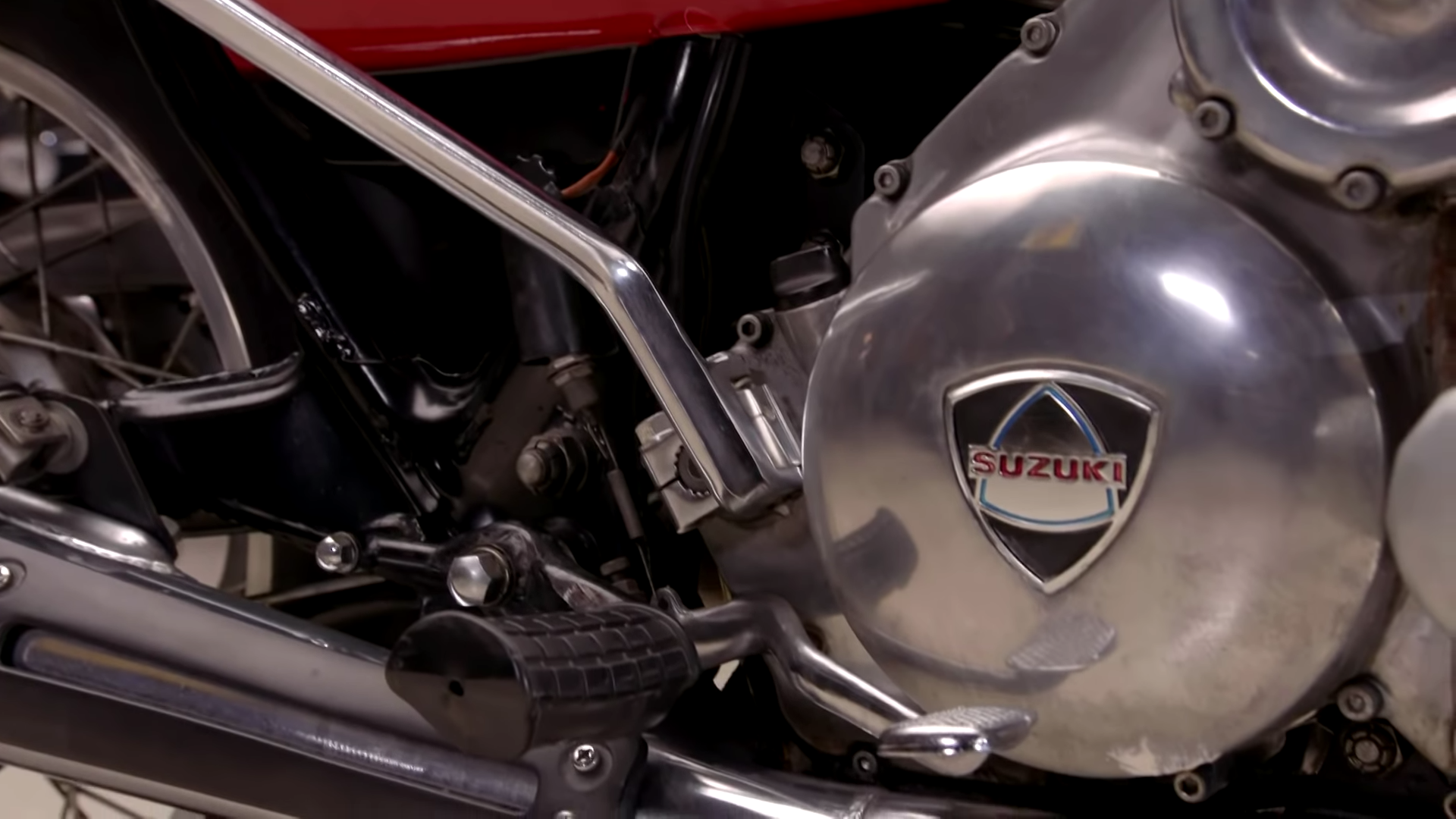 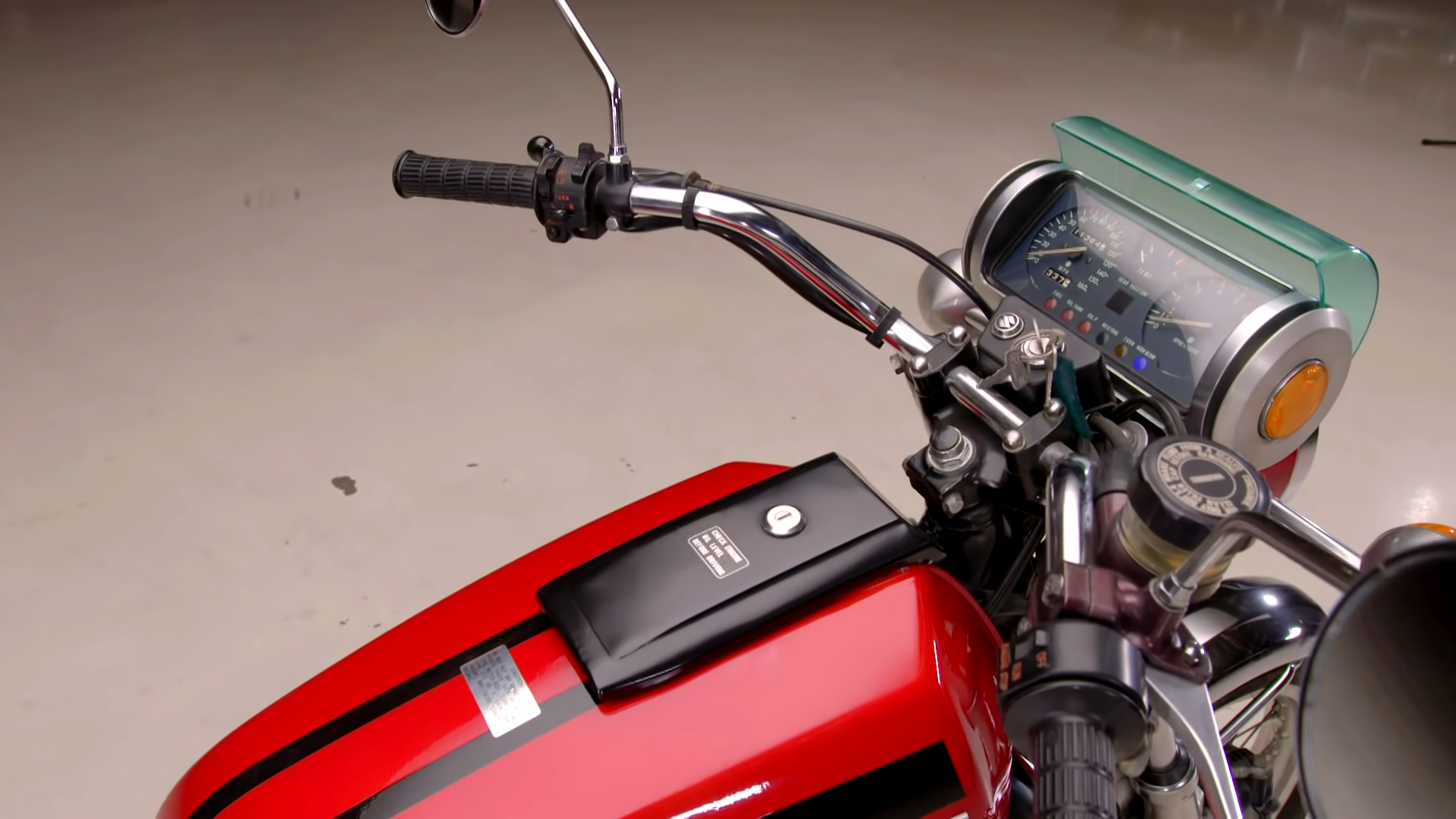 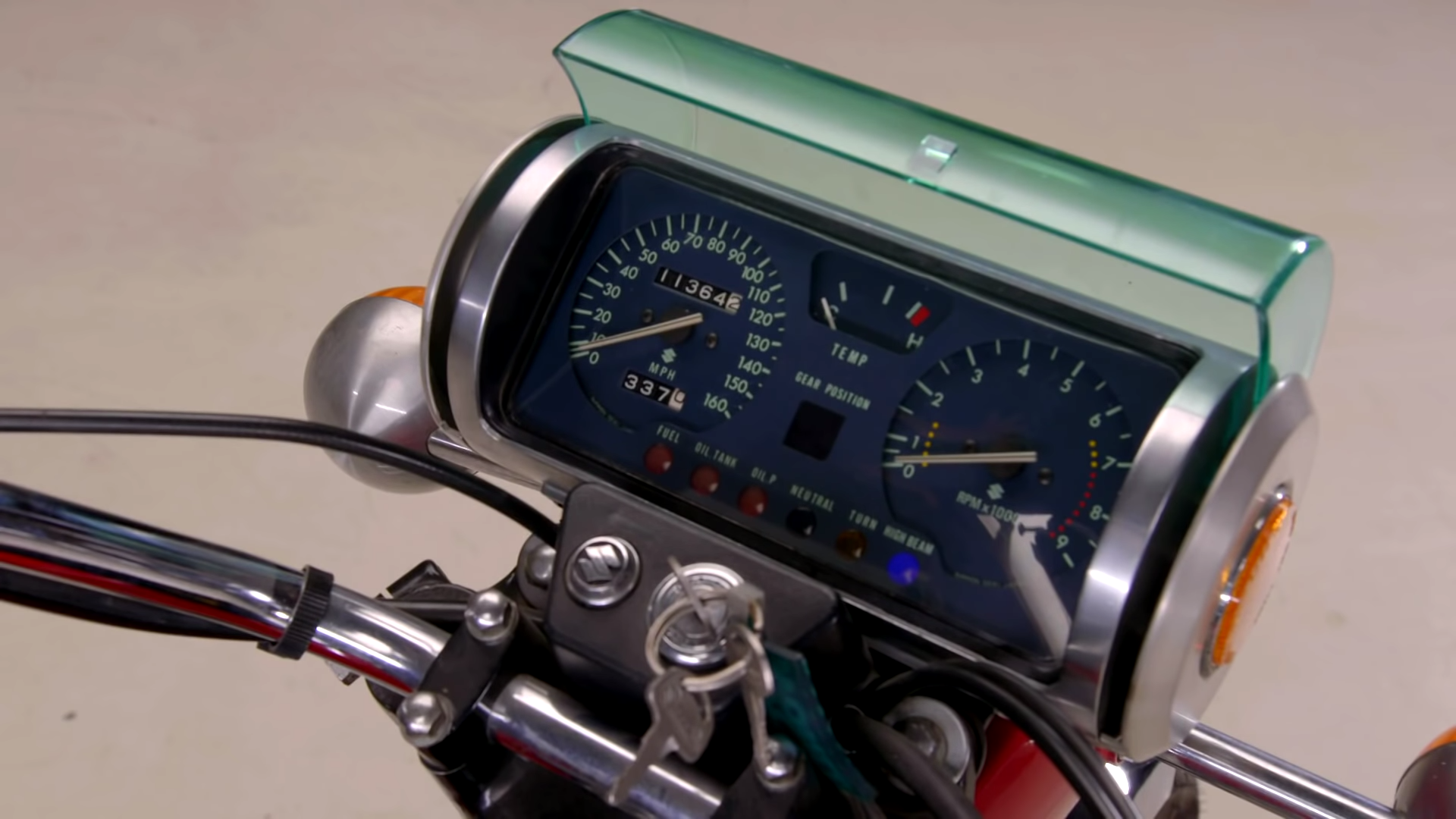 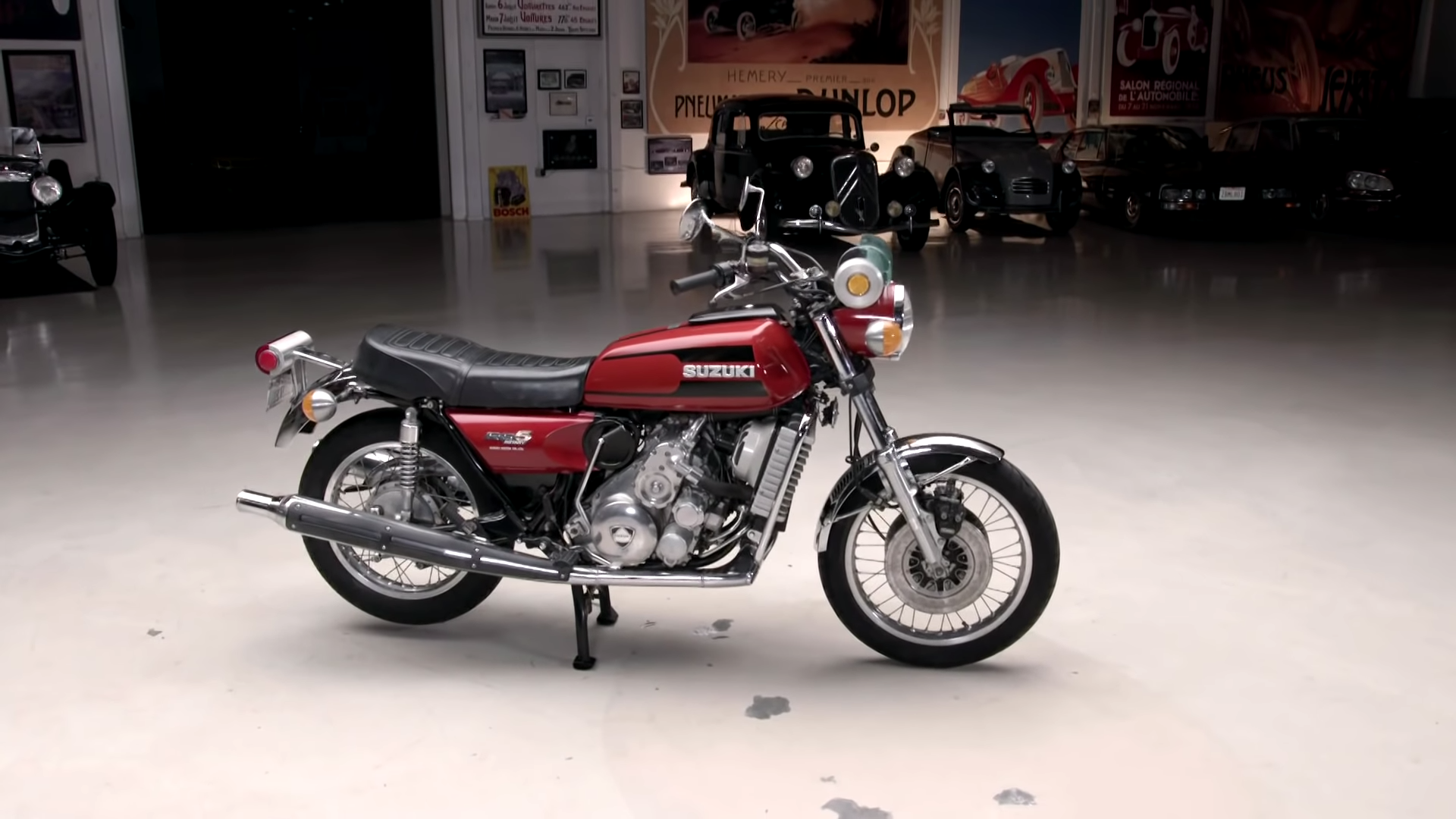 Legal worries aside, because of its high-maintenance nature and big-bike price tag, the RR5 still nearly bankrupt Suzuki, with the company then only kept afloat by its GS750 and GS400 sales.

As a fan of unusual and rare bikes, Jay Leno bought his 1975 Suzuki RE5 in slightly used condition a long time ago. With the odometer showing nearly 11,400 miles these days, it still has its factory finish, as well as all the Italdesign features Suzuki deleted from the RE5s it was still trying to sell in 1976. While talking about “turbine-like smoothness,” the former show host is more than happy to satisfy all of his rotary bike’s fancy oil requirements.