Home » Auto News » The Production Czinger 21C Will Do 281mph

The Production Czinger 21C Will Do 281mph 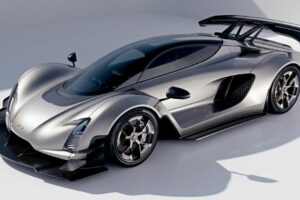 About 15 months ago, we were discussing the long-term viability of Californian start-up Czinger. Making a new supercar brand is a tricky endeavour, but fast forward to today, and Czinger has made it through a global pandemic and come out the other side with the production version of its first car. This seems like a good sign.

It’s still called the 21C, and the key details remain. We have the tandem seating position that allows the driver to sit centrally in the car with a (preferably short) passenger behind, a 2.88-litre flat-plane crank V8 providing 1233bhp, and supplementation from a pair of electric motors – one for each front wheel.

However, compare it to the old car, and you’ll see that much of the bodywork has been altered. The whole car is now a little wider at 2050mm, and yet, the dry weight is just 1240kg, giving the 21C the coveted but seldom-seen 1:1 power-to-weight ratio.

This makes the 21C spectacularly fast. Czinger has released a comprehensive list of performance stats for the car, including 0-62mph in 1.9 seconds, 0-186mph in 8.1, and 0-248mph in 21.3 seconds. Keep the throttle pinned for even longer in a 21C with the low-drag ‘vmax’ setup, and you’ll hit 281mph, up from the concept’s 268mph claimed top speed.

If you instead go for the high downforce configuration, that figure will drop quite a bit. Czinger hasn’t given a number for the production car, but for the concept, this was a still very impressive 236mph. In return for the lost speed, you’re getting an incredible amount of downforce – Czinger quotes 615kg at 100mph and an astonishing 2500kg at 200mph. That’s nearly as much as the Bugatti Bolide.

Getting you to the above figures is a twin-turbo V8 developed from the ground-up by Czinger. It redlines at 11,000rpm, and if you pay for a power upgrade, it’s good for 1332bhp. It drives the rear wheels via a seven-speed sequential gearbox and can be run on a variety of juices including e-fuels.

There’s no mention of price, but a figure of $1.7 million (£1.2 million) was touted when Czinger revealed the concept last year. The intention is still to build 80 of these things, with a lot of the components created via 3D printing.