The Nissan Patrol NISMO Is the Everyperson’s Mercedes-AMG G63 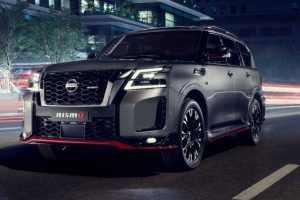 The Nissan Patrol (better known to us Yankees as the Nissan Armada) is the Japanese brand’s biggest and baddest SUV. It’s designed as both a people-mover and a more-rugged-than-a-crossover body-on-frame off-roading machine. But, if desert dune running and go-anywhere, do-anything capability don’t quite appeal to you, then maybe the Patrol’s new NISMO treatment will do the trick—just so long as you happen to live in the Middle East, because that’s the only market this NISMO will be sold in.

Nissan’s Motorsports (Ni-SMO, get it?) division has worked its magic on a range of Nissans in the past, and it even set its tinkering hands on a Patrol before. But this new Patrol NISMO promises to be even badder than the one that came before it. The first thing you’ll no doubt notice is the extremely deep front bumper, the redesigned end, the sporty side skirts, and the F1-style central rear fog light. Clearly, approach and departure angles, ground clearance, or rock-proofing weren’t front of mind when Nissan was designing this particular Patrol.

Because the NISMO treatment will only be offered on Patrol V-8 LE Platinum City models, power comes courtesy of a 5.6-liter V-8 good for 428 hp and 413 lb-ft of torque. The gargantuan SUV rides on equally huge 22-inch wheels, and the standard suspension has been replaced by a Bilstein setup. Because handling … in a near-6,000-pound SUV.

If you can’t quite square why Nissan tried making the Patrol a better handling SUV, perhaps you can appreciate the additions made to the interior. There is a smattering of Alcantara on the steering wheel, the seats are NISMO-specific buckets, and the cabin is said to be more comfortable thanks to greater road isolation cutting down on vibrations. Oh, and a small update to the HVAC dedicated to rear-seat passengers helps keep them cooler on hot desert afternoons.

So, what NISMO has wrought here is an extremely aggressive-looking, three-ton body-on-frame SUV with a stiffer suspension but a cabin that’s been made more comfortable. An unusual juxtaposition, to say the least. But, also, perhaps a truly wonderful one. It costs $105,000, though, again, you can’t buy one outside of the Middle East. We doubt Nissan would NISMO-fy the U.S.-market Armada in a similar fashion, but you never know … today is April Fool’s Day.