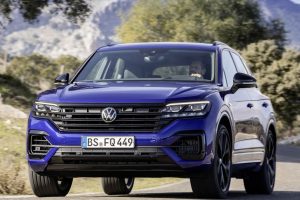 Ladies and gents – please allow us to present what is by far the most expensive R-badged VW product ever. It’s the new Touareg R, which VW UK has just made available to order for £71,995.

That sounds like a lot when the considerably faster and arguably more exotic Alfa Romeo Stelvio Quadrifoglio we’re currently running as a longtermer is only a grand more, but remember, the Touareg is one size up. And in any case, while it may proudly wear an R badge, its true competition comes from cars like the BMW X5 45e rather than any out-and-out performance SUVs.

One of those will set you back about £10,000 less, but you’ll need to add all sorts of options to the X5 to bring the spec up to an acceptable level. No such issue with the Touareg R, which uses the already generous Black Edition trim level and bolsters it by lobbing on even more kit as standard.

You get air suspension which can run 25mm lower than other Touaregs, 22-inch ‘Estoril’ wheels, a panoramic sunroof, a 360-degree camera, an upgraded infotainment system, four-zone climate control and much more besides. You even get six USB sockets. Think of all the things you can charge!

Along with all the extra toys, the Touareg also has unique styling courtesy of some slightly more aggressive front and rear bumpers, and the expected smattering of R badges. And yes, you can have it in the signature R paint colour of Lapiz blue if you’d like.

It’s powered by a twin-turbo V6 supplemented by an electric motor and a 14.1kWh battery pack. Unlike a lot of ‘all-wheel drive’ hybrids, the Touareg R doesn’t merely power all four wheels by having the engine power one end of the car and the motor the other. Instead, the motor lives within the eight-speed automatic gearbox, which feeds power to both axles via an active centre differential.

This setup makes for a 0-62mph time of 5.1 seconds, making it the fastest current version of the Touareg, albeit not the fastest third-gen derivative ever. The V8 TDI Touareg managed the benchmark sprint in just 4.9 seconds, although it never came to the UK, and has since gone out of production.