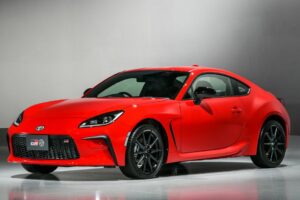 Whilst many criticised the old GT86’s 2.0-litre with 197bhp that could be outpaced by a Ford Fiesta ST, the new GR86 comes with a bigger 2.4-litre four-cylinder boxer engine producing 231bhp and 184lb ft of torque. Of course, it was never really about the straight-line pace, and the chassis was the main focus.

Toyota has really taken criticisms of the last car on board, and has made a big show about the increased 231bhp power figure and engine size on its website. This power figure may even be slightly on the conservative side, if the results of some dyno testing are to be taken into account. According to Toyota, however, the increased 184lb ft of torque delivered by the 2.4 engine is what ‘will be most keenly appreciated’ over the previous car’s 151lb ft.

The GR86 has stayed true to its roots, and is still naturally aspirated like the GT86 that came before it, and a turbocharged version is probably unlikely. Zero-to-62mph takes a reported 6.3 seconds compared to the 7.5 seconds it took the GT86.

If you liked the shape of the old one, chances are you’ll like this one too as… the main body work looks identical. There are heavily reworked front and rear ends, and a pair of swollen rear arches that look pretty purposeful. The grille is squarer than the one on the new Subaru BRZ – a nod to the GR Yaris – but otherwise the two cars look very similar once again. The tail-lights are also similar to the Yaris, and the GR86 wears the same 18-inch wheels too.

If you’re a fan of the old GT86’s looks, chances are you’ll like the new GR86 too, as its styling is a logical evolution. The front and rear ends have been reworked, and the swollen rear arches look pretty purposeful – a welcome addition that adds a little aggression to its stance. There are some hints to the GR86’s family connections, with tail lights and a more chiselled front grille than the Subaru BRZ, which instead link it more closely with the GR Yaris. The GR86 wears the same 18-inch wheels as the four-wheel drive hot hatch too.

It’s fair to say that the driving experience always came above the fit and finish of the interior, and it looks like it might be the case still. There is a digital dash and the sporty red accents, but the touchscreen looks like an aftermarket unit from a decade ago and those blank steering wheel buttons need some functions.

Still, the car in these pics has two-zone air con and heated seats for extra comfort, and Toyota has confirmed that the GR86 will get Subaru’s EyeSight driver assistance system – if you order an automatic gearbox. This features both driver aids and the ability to automatically contact the emergency services. The Toyota GR86 coupe will launch in the UK this summer.

What do you think of the new GR86 and its sub £30k starting price?