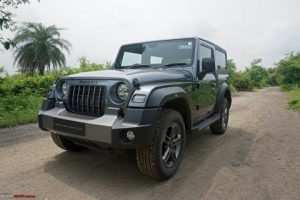 The Thar received 41% of the votes. The 2nd-generation is a huge leap ahead of the Jeep it replaces.

Grabbing 41% of the votes on this poll, the Mahindra Thar is the Team-BHP Car of 2020. This 4×4 generated a lot of hype, lived up to it IMHO and exceeded the sales projections of its own maker! Mahindra actually added 50% manufacturing capacity (2000 -> 3000 units / month) to address the long waiting list for the car.

The 2nd-generation car has sure expanded the Jeep’s appeal. Because of its superior build, better interiors & all the amenities, the Thar can be used as a daily driver. But, only if you accept its many compromises.

The Thar is a h-u-g-e leap ahead of the Jeep it replaces, and has created an all-new segment. That of a modern, safe, useable offroader that can be your daily driver + weekend toy. Few cars pull the strings to your heart the way that the Thar does. You’ll enjoy looking at it, you’ll enjoy driving it, and it’ll fill your drives with smiles & laughter. The Thar looks deadly, has a tough body-on-frame build, is competent in 4×4 mode, comes with terrific engines + gearboxes and has a nice cabin. Only wish that Mahindra learnt to tune its suspensions better – the ride is too bumpy and its high speed manners are poor.

That 4-star GNCAP rating was the icing on the cake. No one expected an open Jeep to fare so well.

There is nothing else like the Thar in the market today. Well-deserved, Team Mahindra!