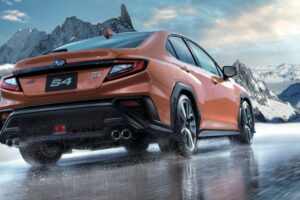 It’s been over two months since the US-spec Subaru WRX, but only now are we seeing the ‘S4’ version that’ll be sold in Subaru‘s native Japan. And on the face of it, it seems much the same, controversial plastic body cladding and all. Look closer, though, and there are some differences.

You get STI badges front and rear on ‘STI Sport R’ WRXs (this trim level doesn’t exist in the US), and there are no reflectors on the rear wheel arches. Also on the boot lid is an ‘S4’ badge, and looking just above, there’s an adorable little rear wiper. Somewhat incongruous on a saloon car, but it might come in handy.

Under the bonnet you’ll still find the new 2.4-litre turbocharged boxer-four, developing 271bhp just as it does in the American WRX. Torque is up ever so slightly, with 276.6lb ft representing an 18.6lb ft increase. Generous.

Perhaps the most significant difference of all is how that flat-four powers the wheels. Here, it does so exclusively via a continuously variable transmission (CVT), referred to as an “eight-speed” gearbox thanks to the simulated shifts it offers via steering wheel-mounted paddles. Unlike the American Scooby and its two gearbox options, there’s no manual available.

From the CVT, torque makes its way to each end of the car via a permanent all-wheel drive system. The behaviour of this, the engine, power steering, adaptive dampers and even the air conditioning depends on how the drive mode selector is set.

See also: The Subaru WRX Wagon Is Back After 14 Years Away, But There’s A Catch

Inside, it’s much the same as its counterpart from the other side of the Pacific, save for an STI badge (depending on trim level) on the steering wheel atop a piece of gloss trim. In the middle of the dashboard is an 11.6-inch infotainment screen, flanked by a 12.3-inch digital instrument cluster.