The Hyundai Kona N Is A 286bhp Anti-Audi SQ2 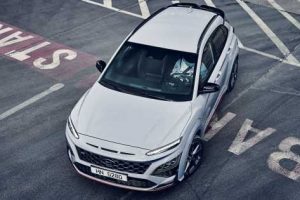 The rapidly expanding Hyundai N family just gained a new member. What you’re looking at here is the Kona N, a car we already knew was coming since Hyundai’s teasers the other week pretty much revealed the thing in full.

At the time, we speculated that it’d be packing a 2.0-litre inline-four turbo engine borrowed from the i30 N and Veloster N, making outputs of 247bhp and 271bhp depending on the version you go for. We were only half right, though – the ‘GDI’ engine is present and correct, but here it’s good for an even meatier 286bhp and 289lb ft of torque.

Unlike the two C-segment N Division hot hatches, the Kona N doesn’t get a manual option to go with its 2.0-litre inline-four. The front wheels are driven by an eight-speed dual-clutch gearbox exclusively, with the cringingly-named ‘N Corner Carving Differential’ effectively distributing torque across the axle.

The full output of 286bhp is only unlocked when the transmission is set to ‘N Grin Shift’ (these names don’t get any better, do they?), otherwise, it sits at 276. Programmed thusly and with the launch control mode activated, 0-62mph happens in just 5.5 seconds – hugely impressive for a front-wheel drive car. The top speed meanwhile is 149mph.

Hyundai hasn’t gone into a whole lot of detail about the suspension side of the equation, but we do know that the Kona N has wider tracks front and rear plus a set of adaptive dampers. With a weight figure of 1510kg, it undercuts all-wheel drive rivals like the Mini Countryman JCW, Audi SQ2 and VW T-Roc R nicely, while not quite besting the less powerful Ford Puma ST.

On the outside, there are beefed up front and rear bumpers, a new twin-exit exhaust and a bespoke set of 19-inch wheels shod in bespoke Pirelli P Zeroes. And yes, you can have it in the dashing Performance Blue hue made famous by the i30 N.

Pricing hasn’t been revealed yet, but we suspect it’ll be comfortably over £30,000, while still offering a big saving over those premium AWD rivals mentioned further up. It’s set to be joined by even more N newcomers too, with Hyundai touting the possibility of battery electric vehicles and hydrogen-powered cars emerging under its sub-brand’s banner at a later date.