Home » Auto News » The Great Escape: Driving My JDM Toyota Van Out of Texas, Due West

The Great Escape: Driving My JDM Toyota Van Out of Texas, Due West 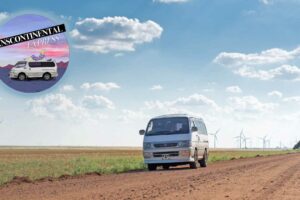 My first stop in Dallas was a fun one. I spent a few days seeing friends I’d not seen in years (just like on the test run), and I tried my best to keep my schedule from being packed, but nonetheless, I packed it. Rationally, I knew that I’d be less stressed if I slowed down. Don’t push as hard as you did on the shakedown, my calm, methodical brain said. But if you have access to a gun range with a silenced MP5 and a set of keys to a Lancia Delta Integrale Evo I in the same day, the soul speaks louder. It was a hectic time, but also rather hard to complain about.

And truthfully, I needed the familiar faces. The next leg of the journey was the most daunting yet, and I was still reeling from my time spent packing my home into boxes and saying goodbye to my now ex-girlfriend. Emotional issues aside, Dallas is the furthest west I’ve ever traveled by car—with the exception of a day spent in San Francisco for a job interview in college, it’s the furthest west I’ve ever been, period. Friendly territory, with supportive words, comfortable beds, indoor AC, and plentiful food and water seemed like a good way to ease myself into the journey. 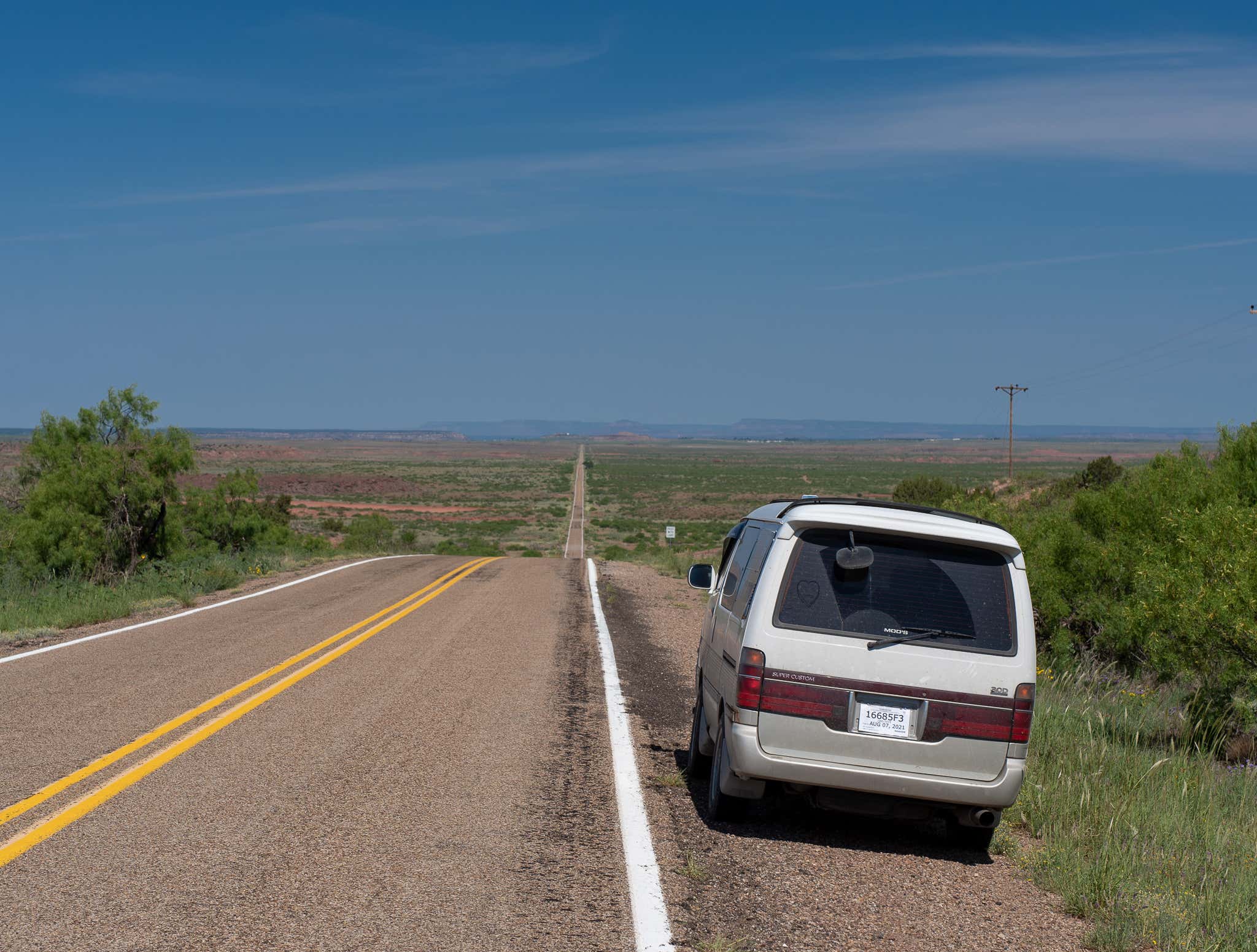 [Editor’s note: Writer Victoria Scott is taking off to travel the country this summer and explore car culture in a JDM 1995 Toyota Hiace, and we’ll be chronicling her adventures through a series on The Drive called The Vanscontinental Express. It’s natural to yearn for the open road at a moment when it feels like the world is waking up from a yearlong daze. But as a trans woman looking for her place in the world, Victoria’s journey is anything but your average road trip. This is part five; you can read parts one through four here.]

It gave me a chance to do a little maintenance, too. The Toyota Hiace’s air-conditioning system needed a recharge something fierce, with its slow leak exacerbated by the hellish humidity of Texas this year, and I wanted to give it an oil change. It had already been my trusty partner for about 6,000 miles, so I figured it more than earned one. This, of course, became an ordeal. The ten gallon container of Rotella I purchased split down the middle (!) and donated half its contents to the van’s carpet, which meant I didn’t even have enough for a change. Luckily, a friend of mine at Texas Track Works was more than happy to squeeze me in for an oil change and to help clean up the van.

The floor of my van is now accented with an adorable pair of pink bathmats I got at Walmart, but I like the look. They make it homier, and I needed that comfort knowing the next steps of my journey would take me even further from my old home. 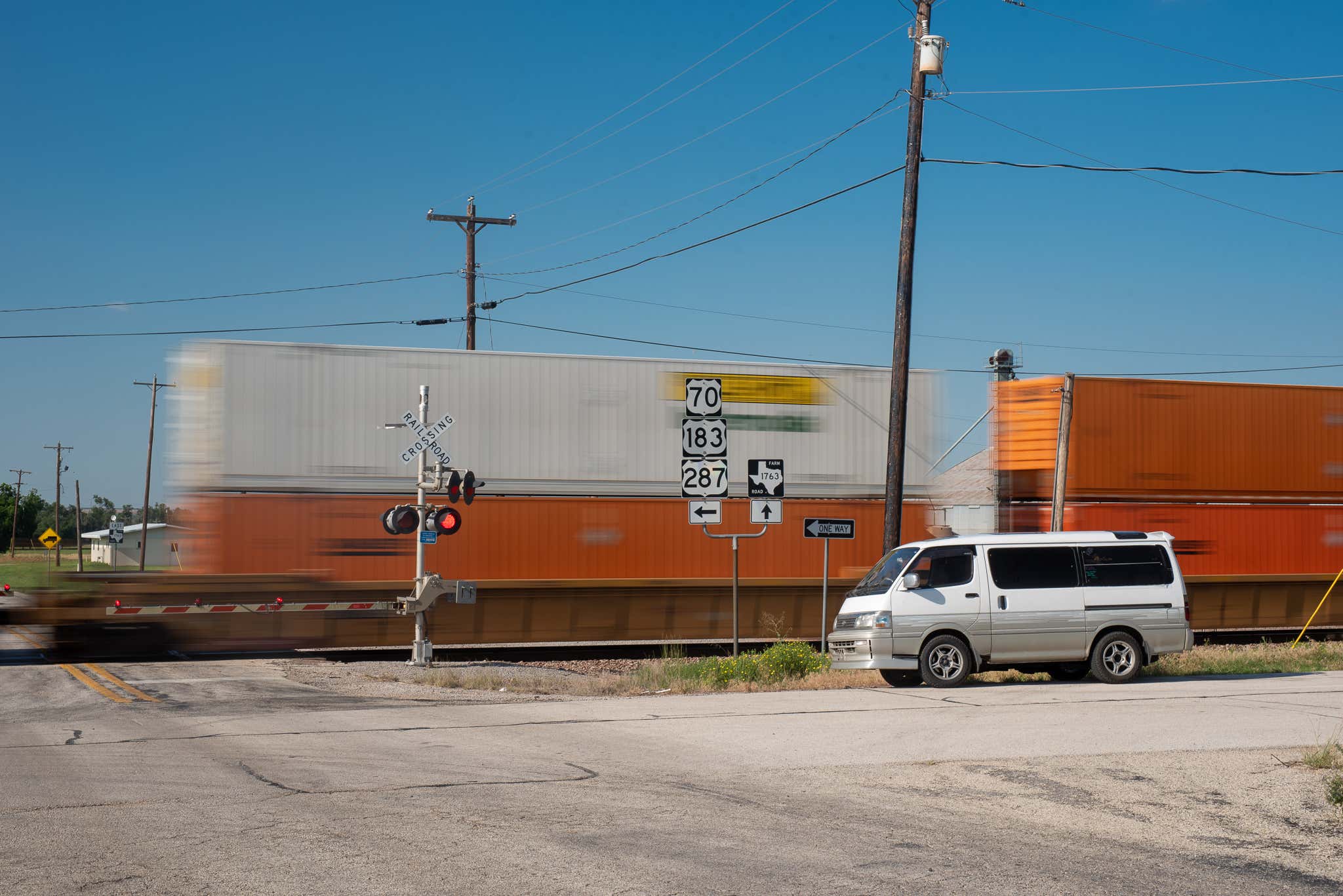 With maintenance all done, I set out for the panhandle city of Amarillo. Dallas to Amarillo along U.S. Route 287 is considered one of the most boring stretches of highway imaginable, with hundreds of miles of flat plains interrupted only by wind farms and tiny rest-stop towns. I knew that flat out, I could make that drive in about six hours, well before I’d get tired, and briefly considered pushing on to New Mexico in the same day to escape the suffocating environment of Texas. Have I mentioned I have trouble slowing down?

But as I drove, and I watched the landscape change and the infinite horizon stretch out, I wanted to see more than just highway. My trusty Hiace, Marsha, only does about 75 mph before the engine runs too hard, and so I figured it wouldn’t be that big a deal to ease off and enjoy myself, even if I was still trapped within the vast expanse of the Lone Star State. 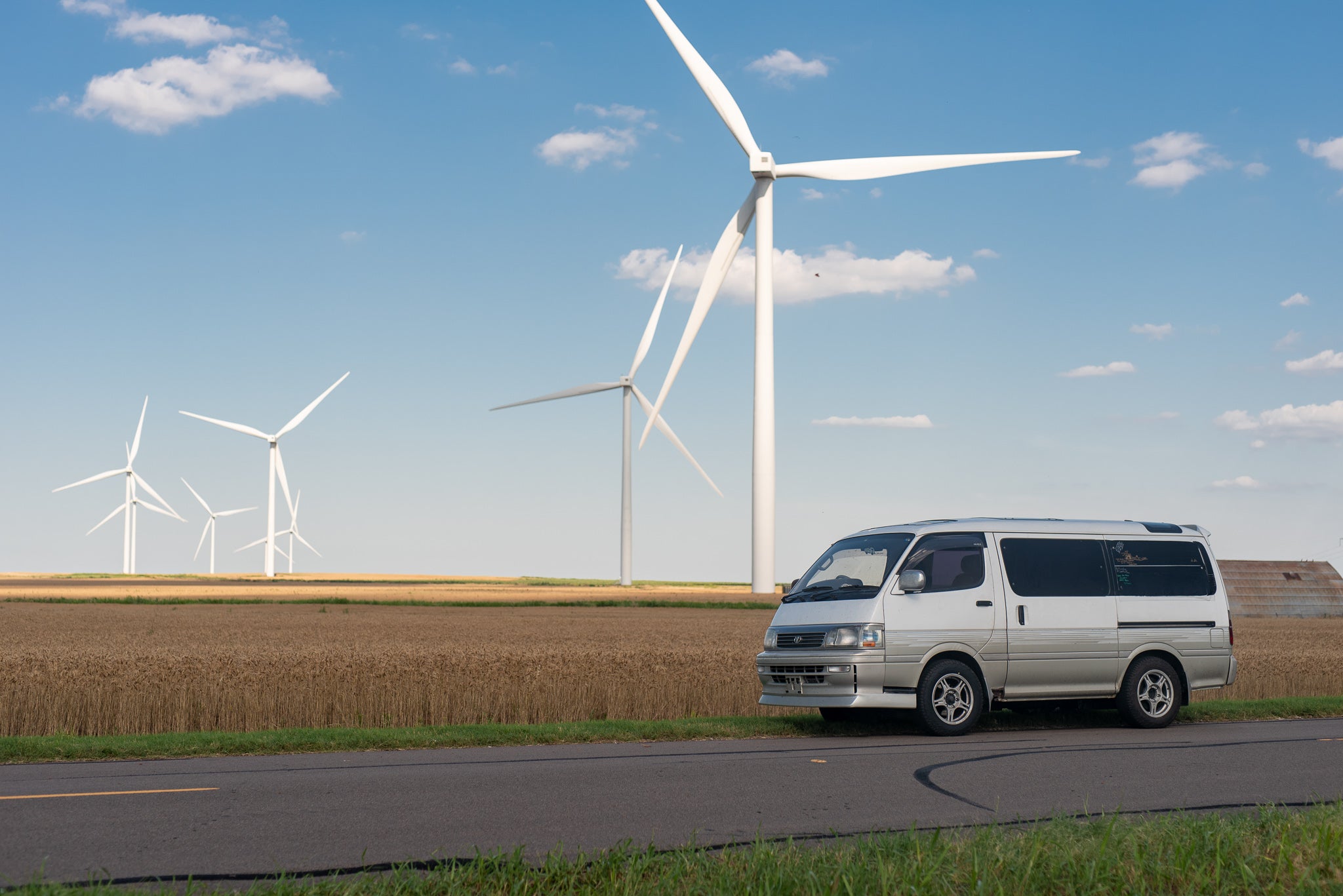 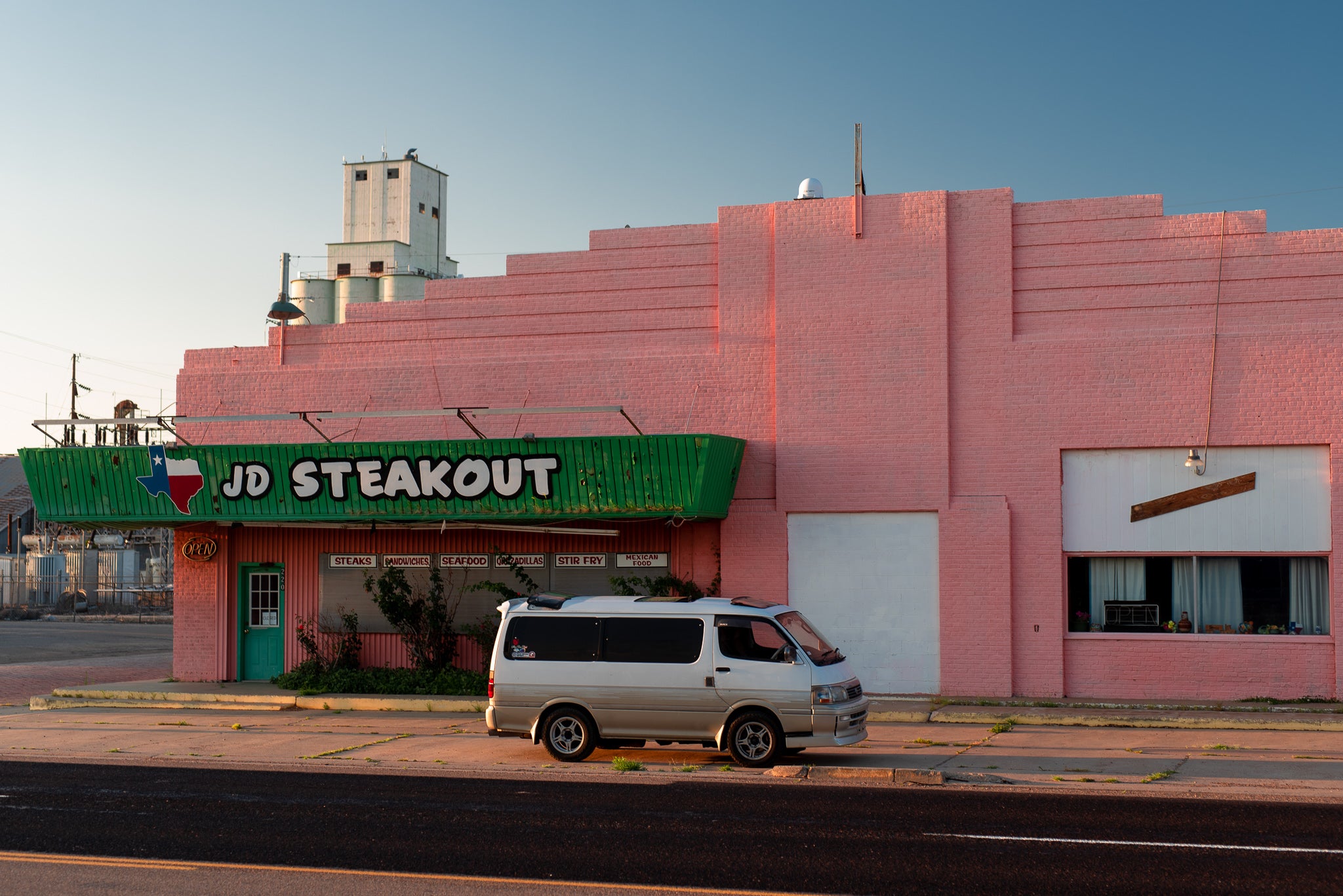 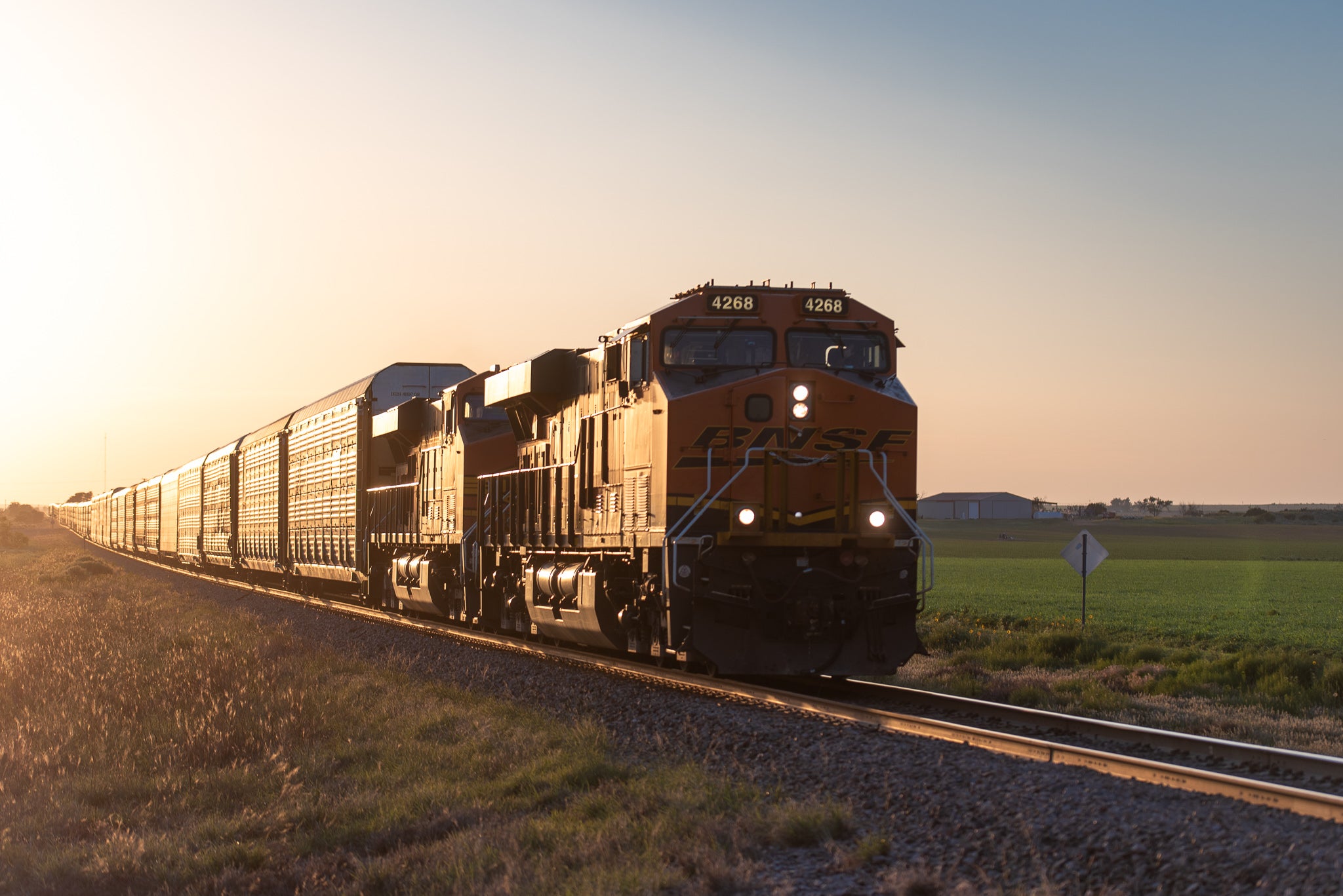 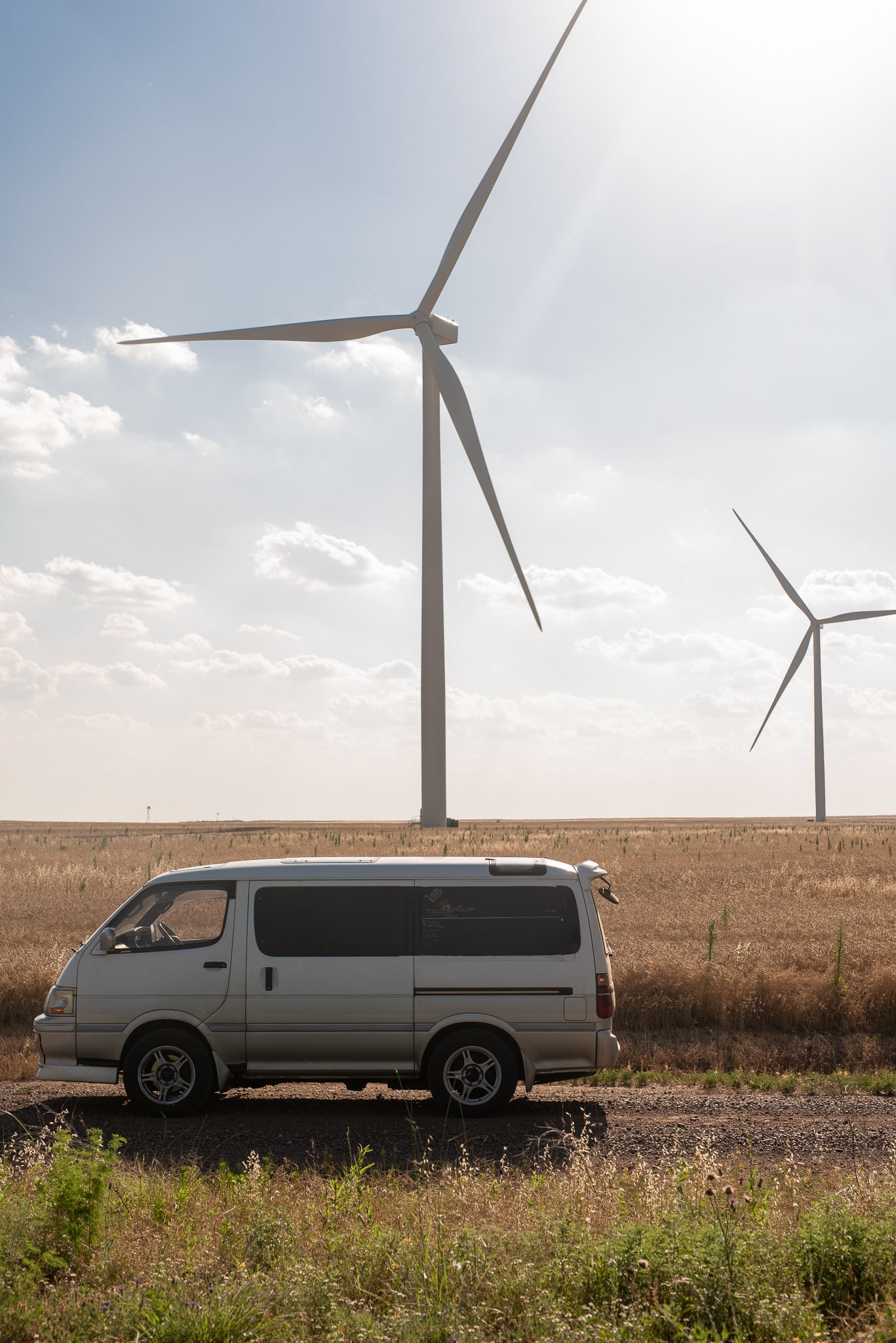 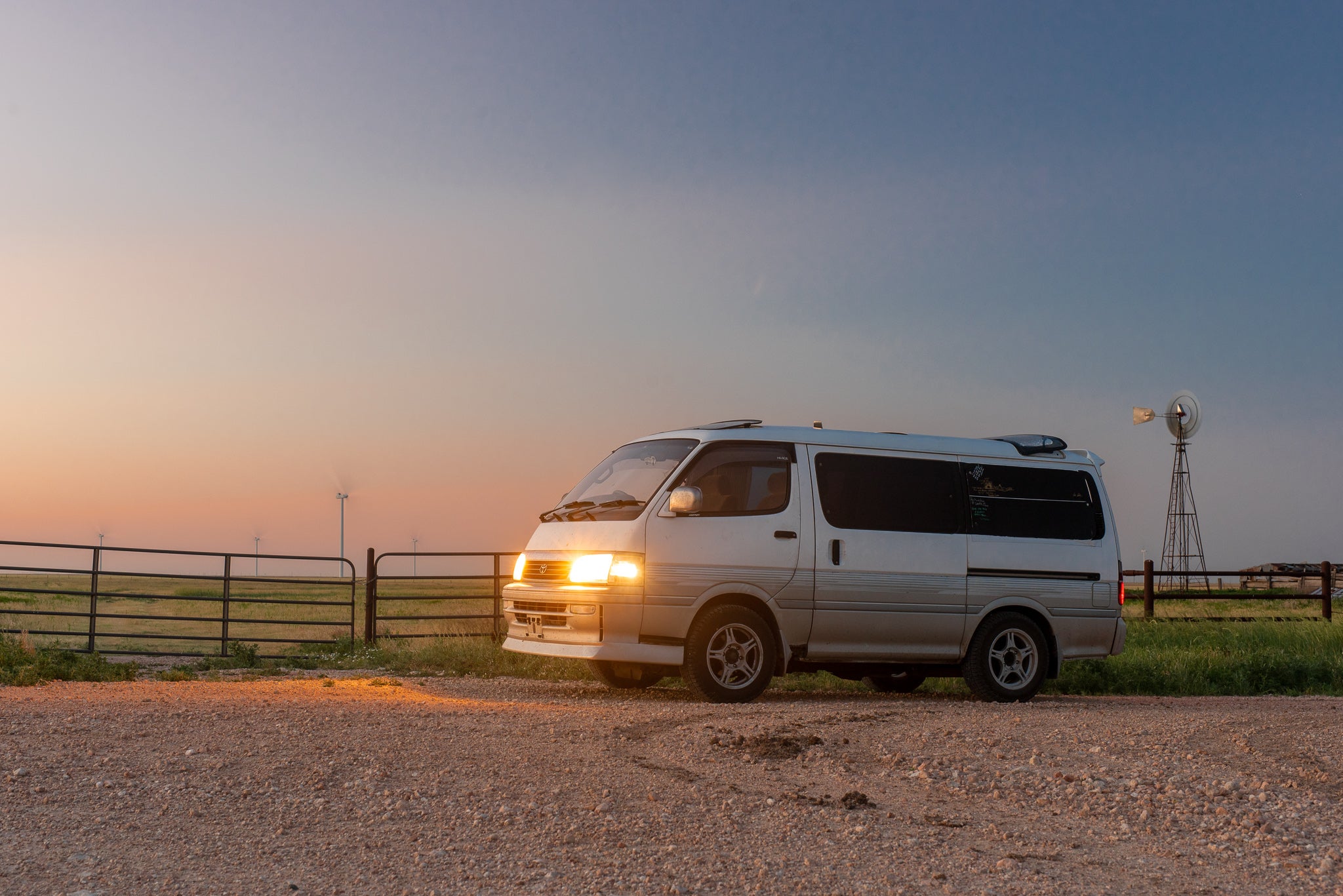 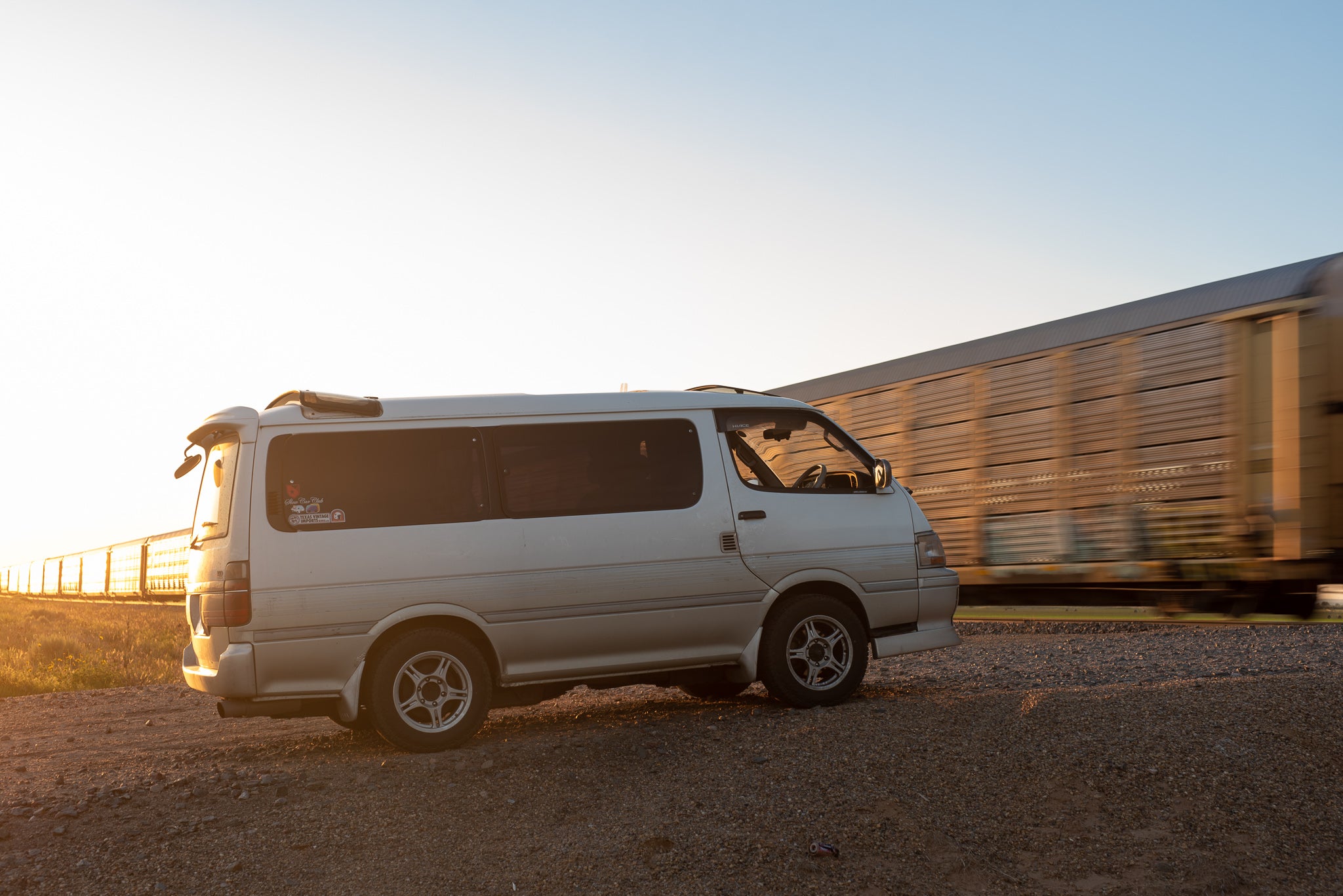 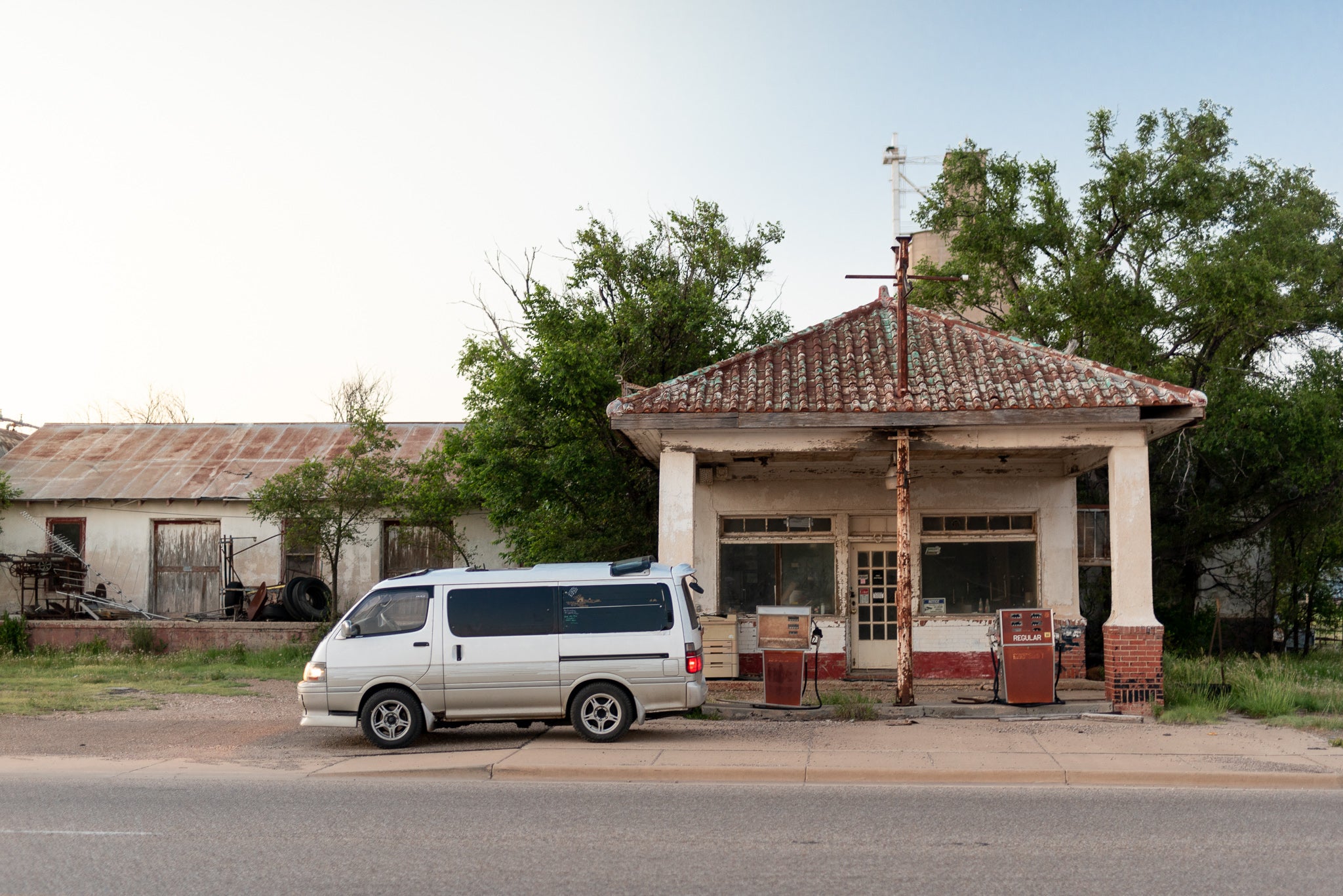 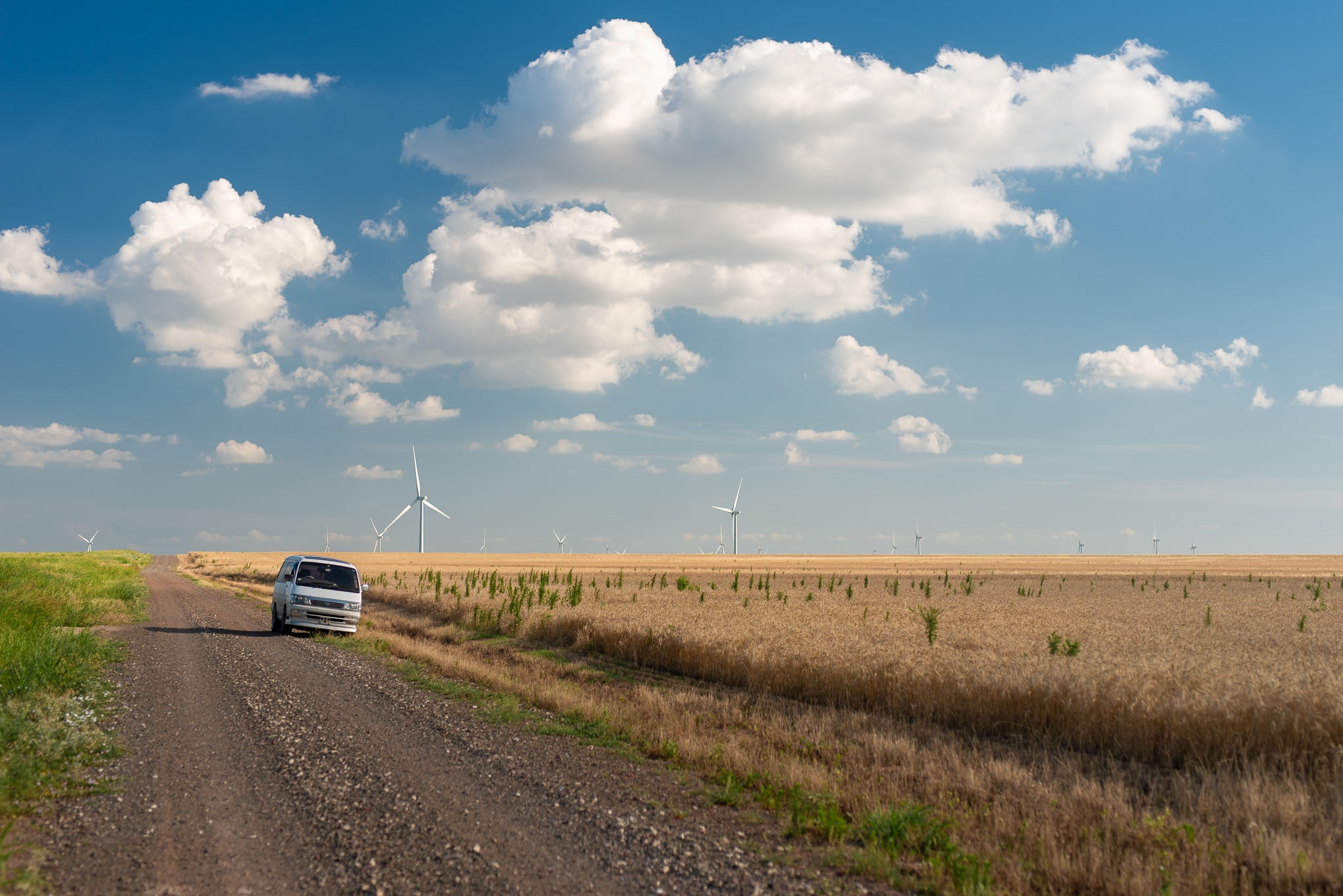 And I did. I took over one hundred forty photos in some of the most desolate landscapes I’ve ever seen. Every time I saw a passing train, or a public dirt road that might get me closer to the looming turbines, I’d go for it, just in the chance of getting a good shot. I pulled off in some of the tiny towns, lining up photos with long-abandoned businesses, trying to evoke the romanticism of the open road in my images that I’ve seen and admired in other artists’ work. I made it to Amarillo very late, but I took pictures that genuinely were worth the exhaustion. 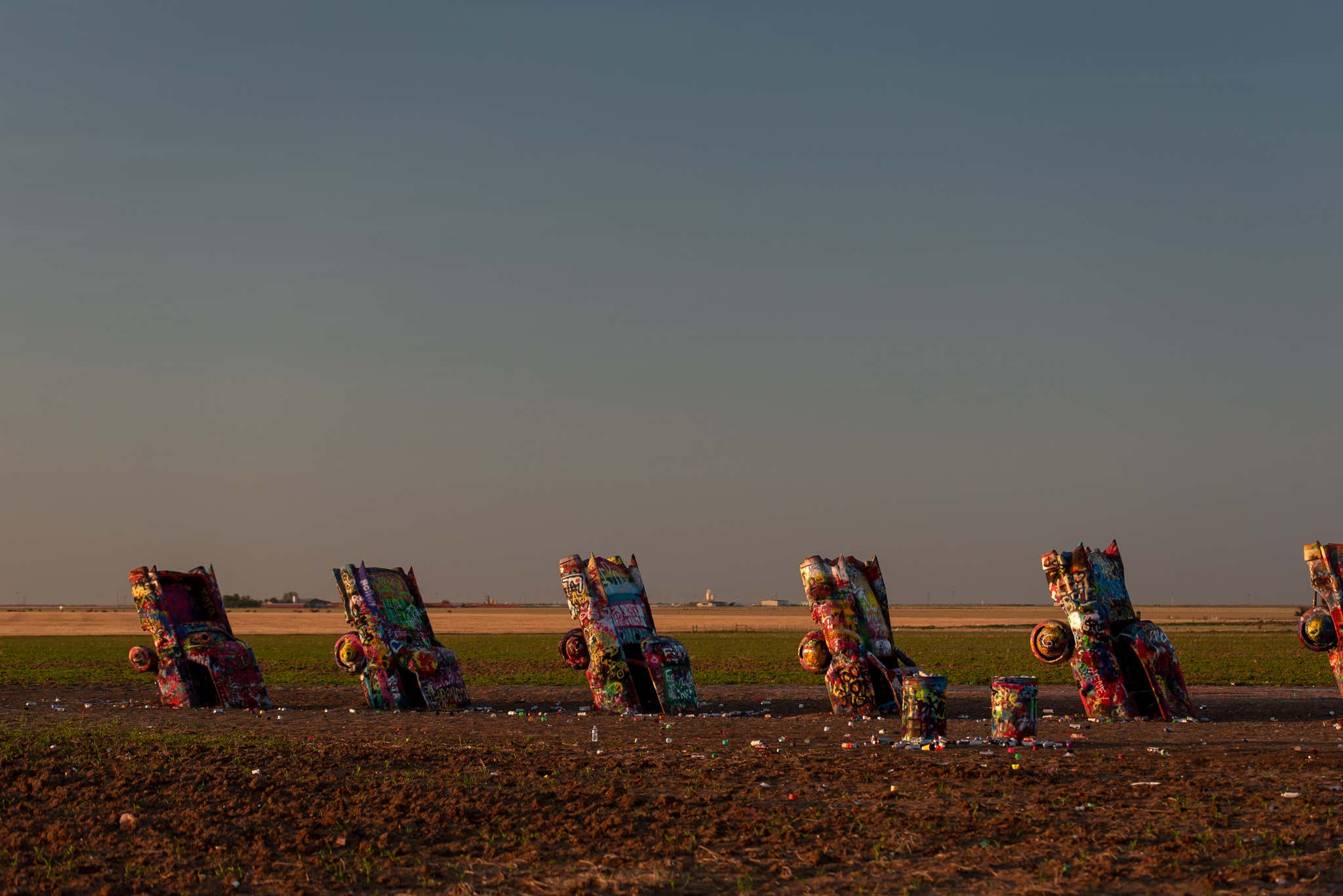 I slept at a Walmart and awoke at 5 AM to make sure I’d have time for breakfast and then a stop at Cadillac Ranch at sunrise for photos. I know that it’s a tourist trap; it’s about the only thing to do off of I-40 for hundreds of miles, so it draws a lot of visitors. Something about the eerie, tombstone imagery of the land barges draws me in.

It feels like the death of Route 66 and its roadside kitsch were immortalized with the half-buried Cadillacs as a reminder that travel used to have fun attractions littered alongside our highways; a eulogy for a different era that I myself am trying to recapture in my own way, and in my own time. 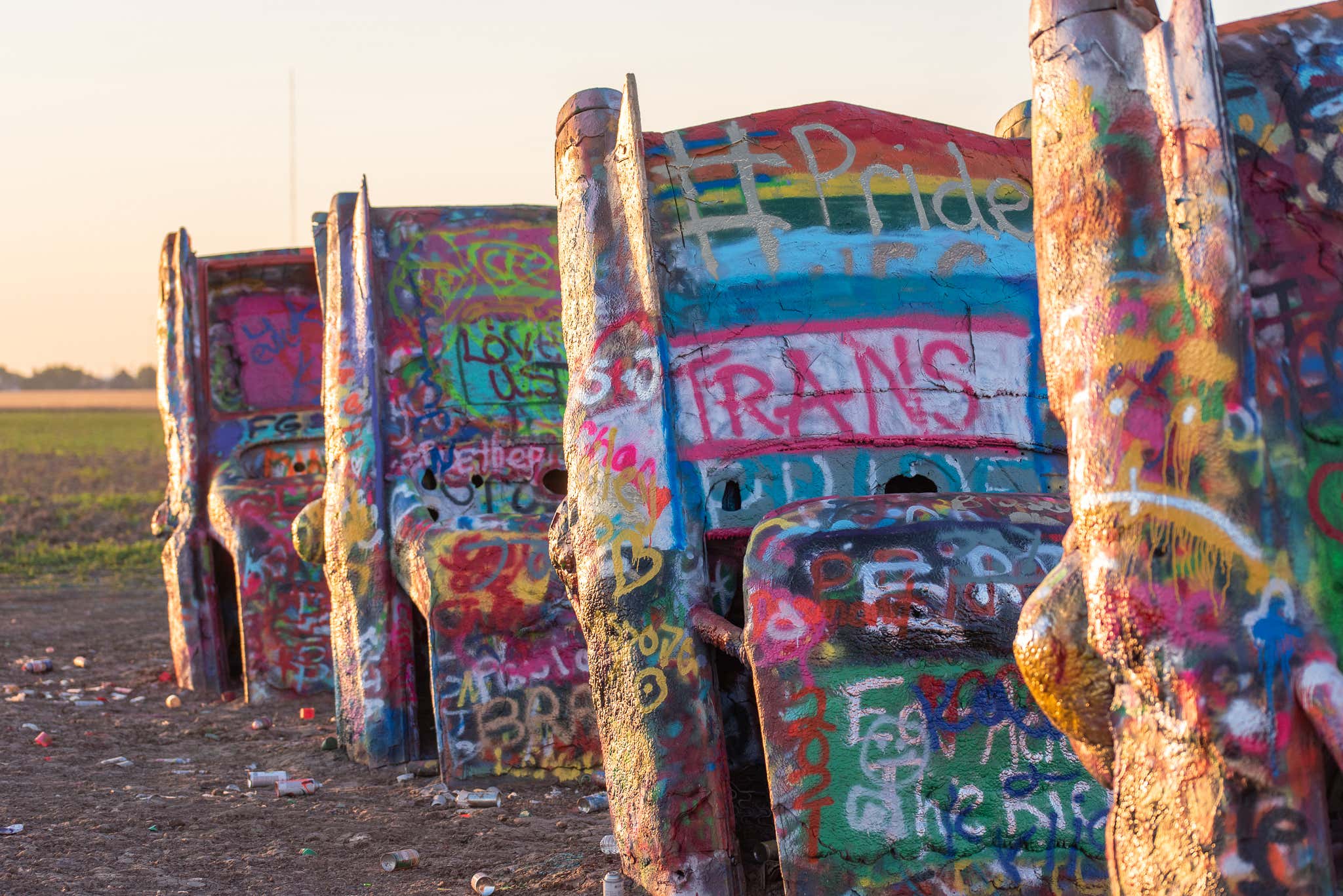 Even though I wasn’t able to find the right colors at the Walmart the previous night, I was able to scrounge up pink, white, and pastel blue cans from the litter heaps and leave a mark of my travels. The Pride flag was already a welcome sight; I just wanted to add one more layer of support to the fossilized paint.

I set out for Santa Fe after making my mark, planning to spend my night in the National Forest north of the city. I didn’t drive long before I was struck with a sudden change of landscape. The rolling fields home to the wind turbines of Texas abruptly fell away and turned into grassy desert. I pulled off as soon as I could for a photo, amazed that finally after 25 years I’d gotten to see it.

And from there I became enamored with the desert. I got off the highway to shoot an abandoned gas station at the New Mexico State line, and realized I was only a few miles from Route 66. I headed for it and tore through unpaved sections, thrilled to finally indulge my inner rally driver. I ended up in a paved section that still has some original buildings, and filled up on gas and decided not to head towards the interstate again if I could help it. I checked my maps and found a rural state route that would take me to the small town of Las Vegas—that is, Las Vegas, New Mexico—and headed for it. 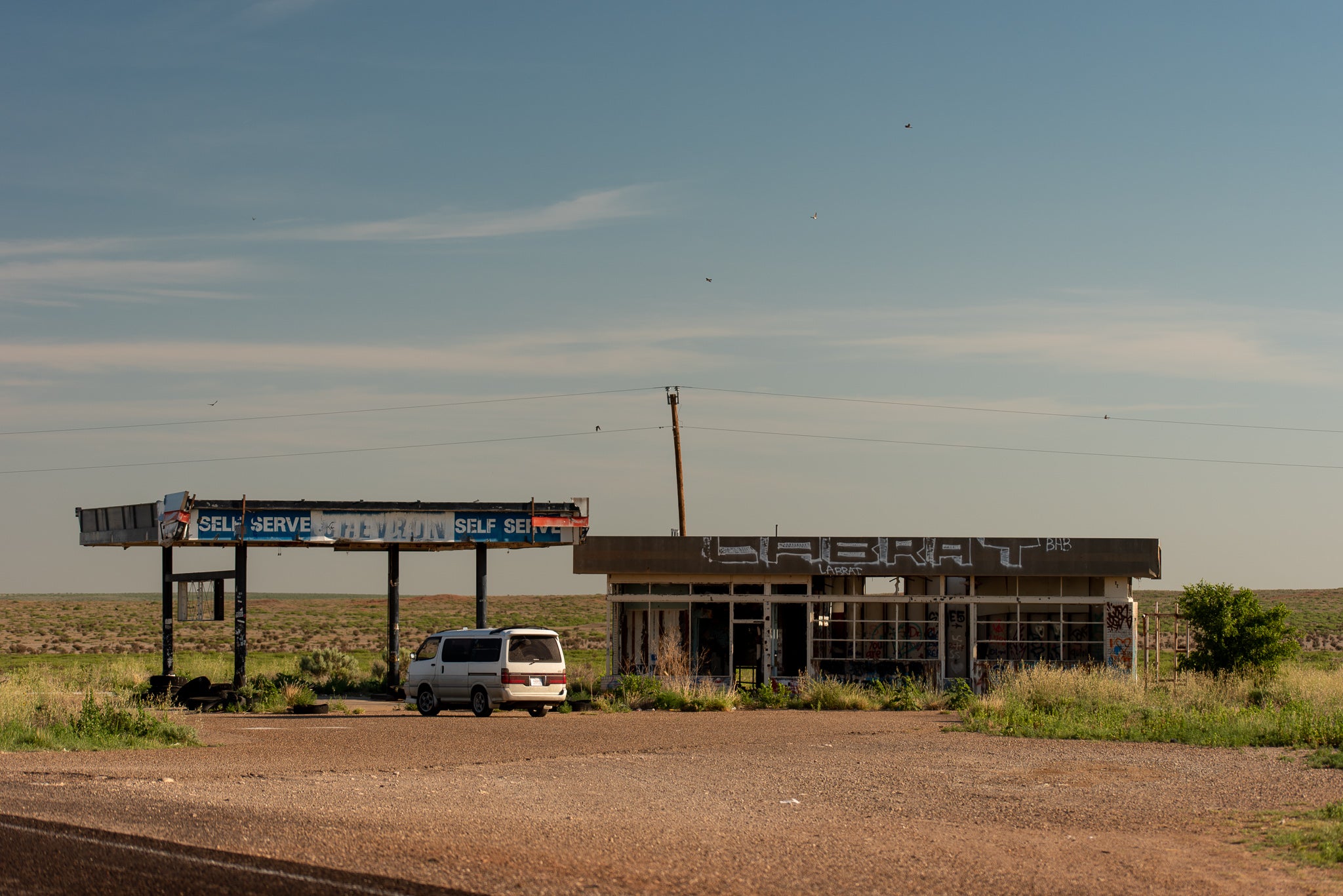 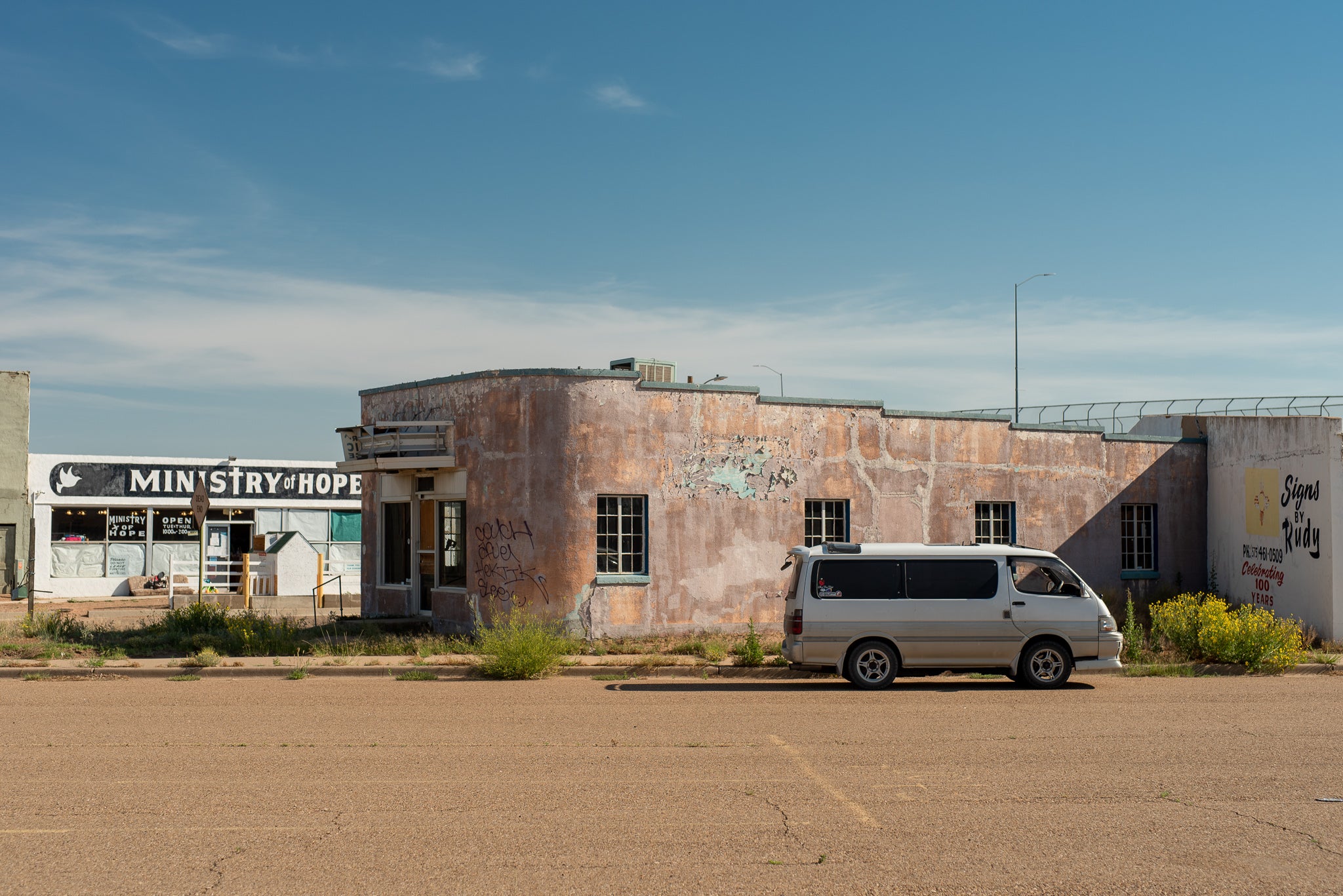 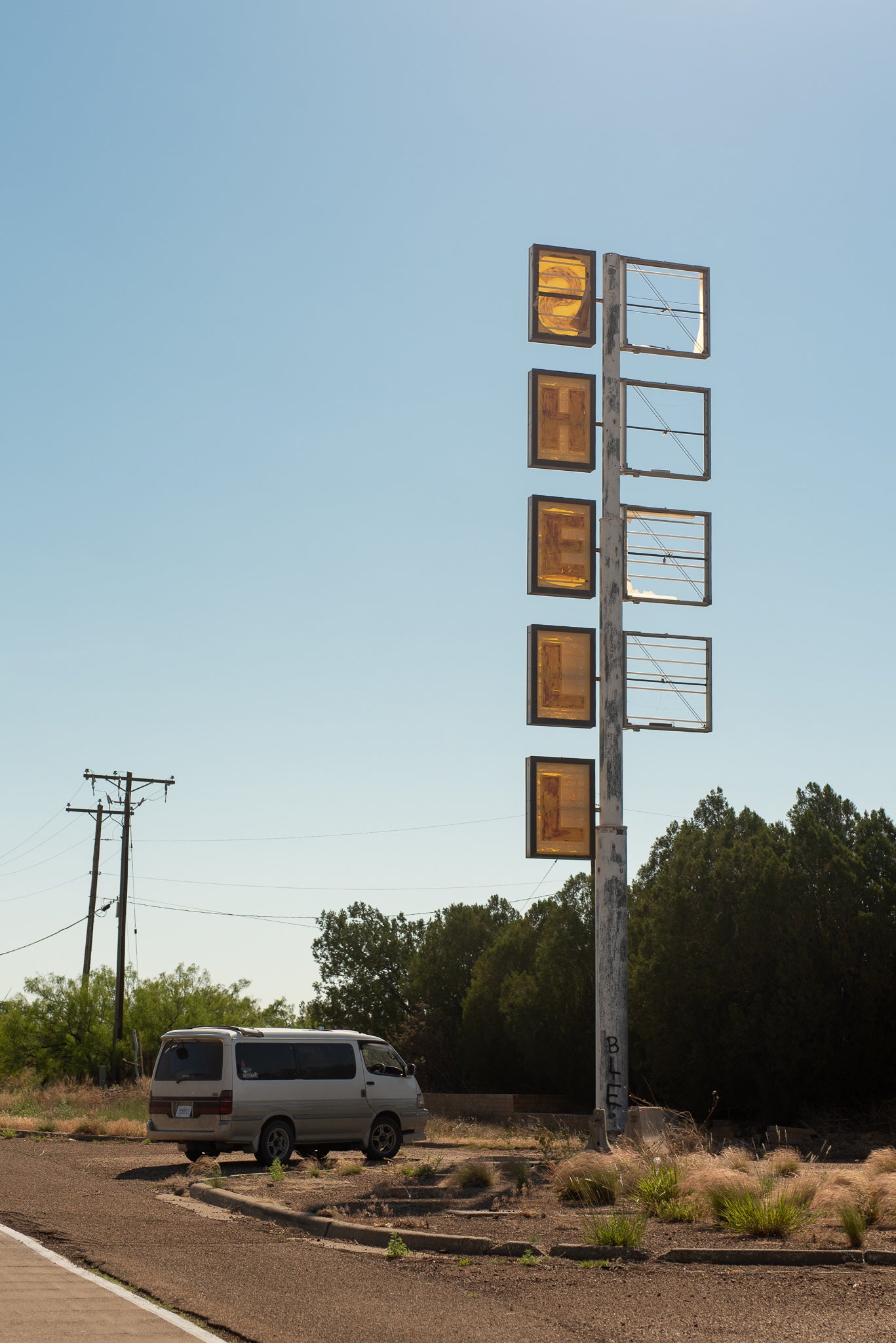 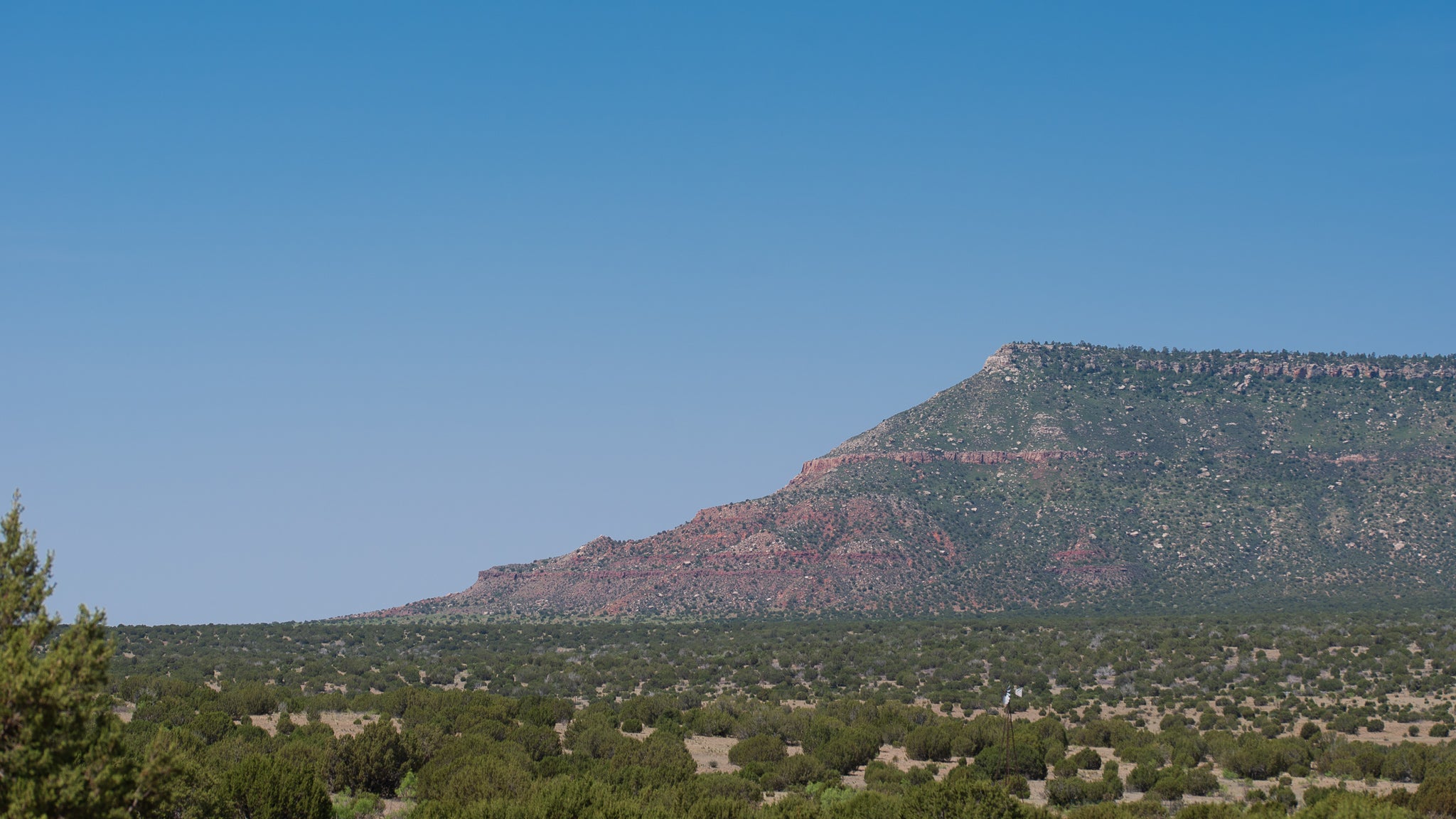 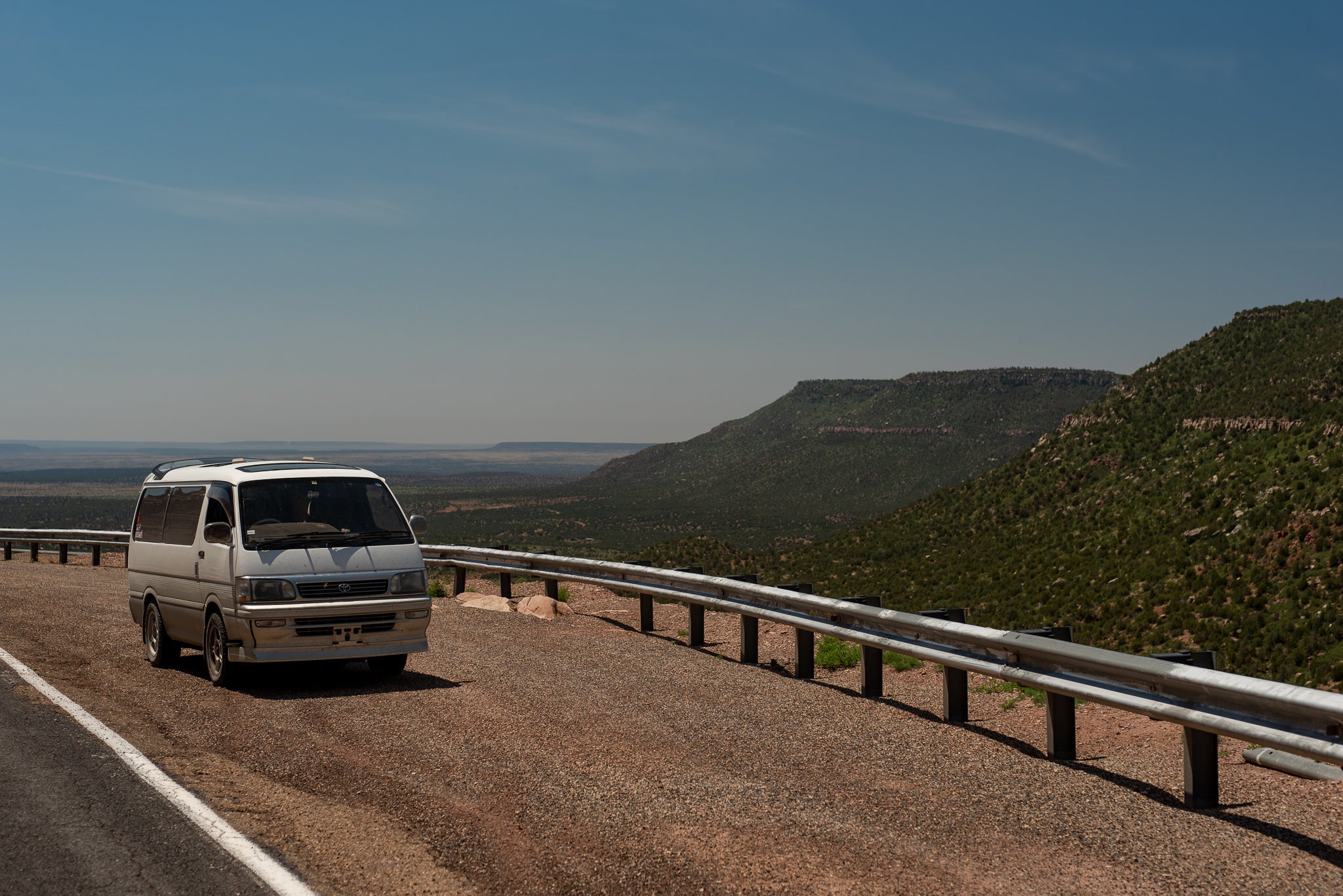 I don’t usually do smart things, but this was one. Flat-peaked mountains dominated the sparse landscape as every corner revealed some new sight to behold. I lost count of how many times I stopped the van to shoot photos. Desert photography is something I am still attempting to master; the beauty and scale is difficult to translate into photos for me, but then again, this was the first time I’d ever seen it, so I’ll cut myself a break. 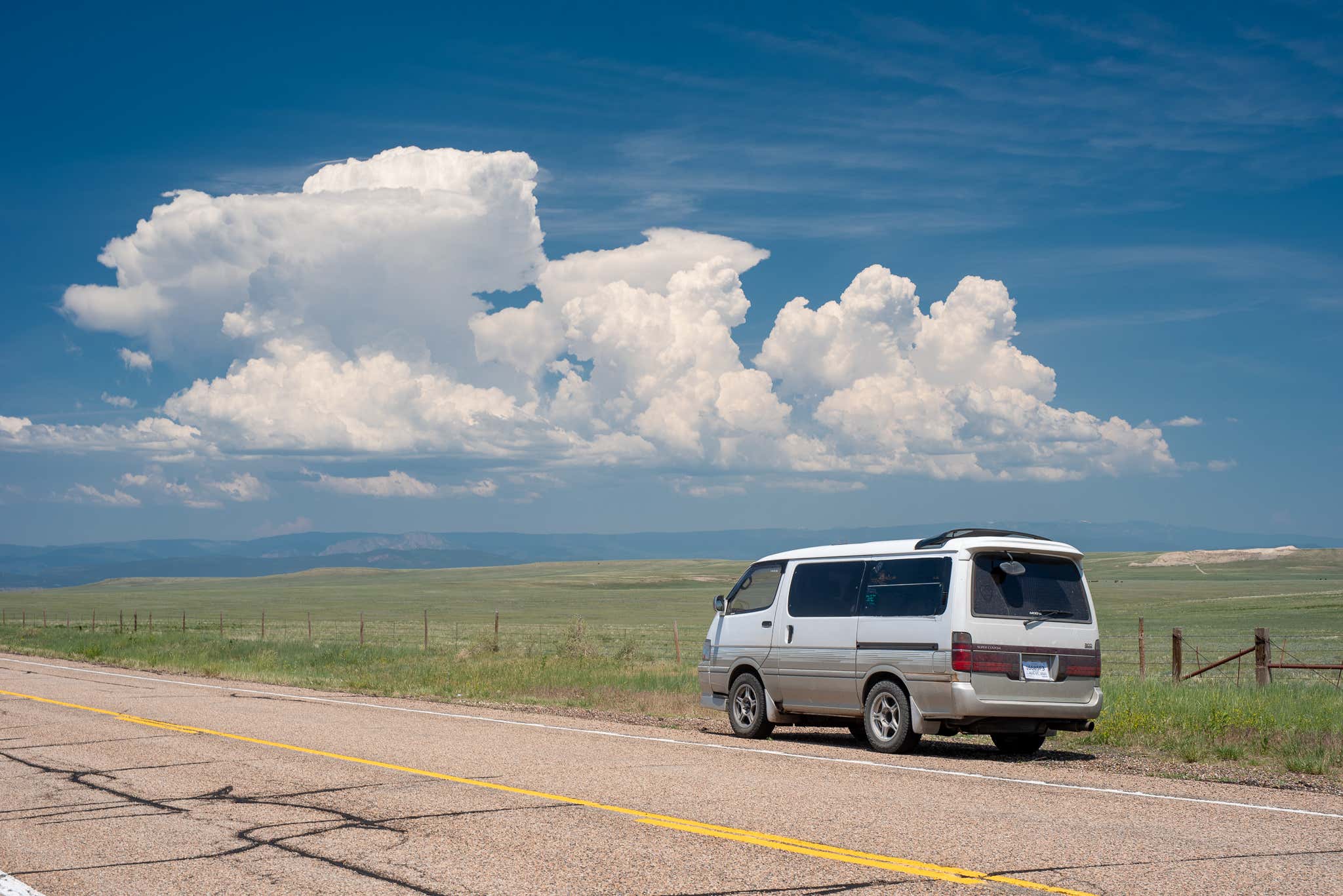 The first time I stepped out of the van and heard nothing but the buzz of desert life and saw nothing but the empty road and wilderness, with no cell signal, and no real deadlines, I cried. I could take my time; no one was waiting on me and my solo-travel plans meant I could sightsee for as long as I wished. The disconnect from all of the stress and tight schedules of the past few months was cathartic.

I do not know what I expected to find in the desert but I found, for a moment, joy at both the stunning beauty and the novelty of it all. 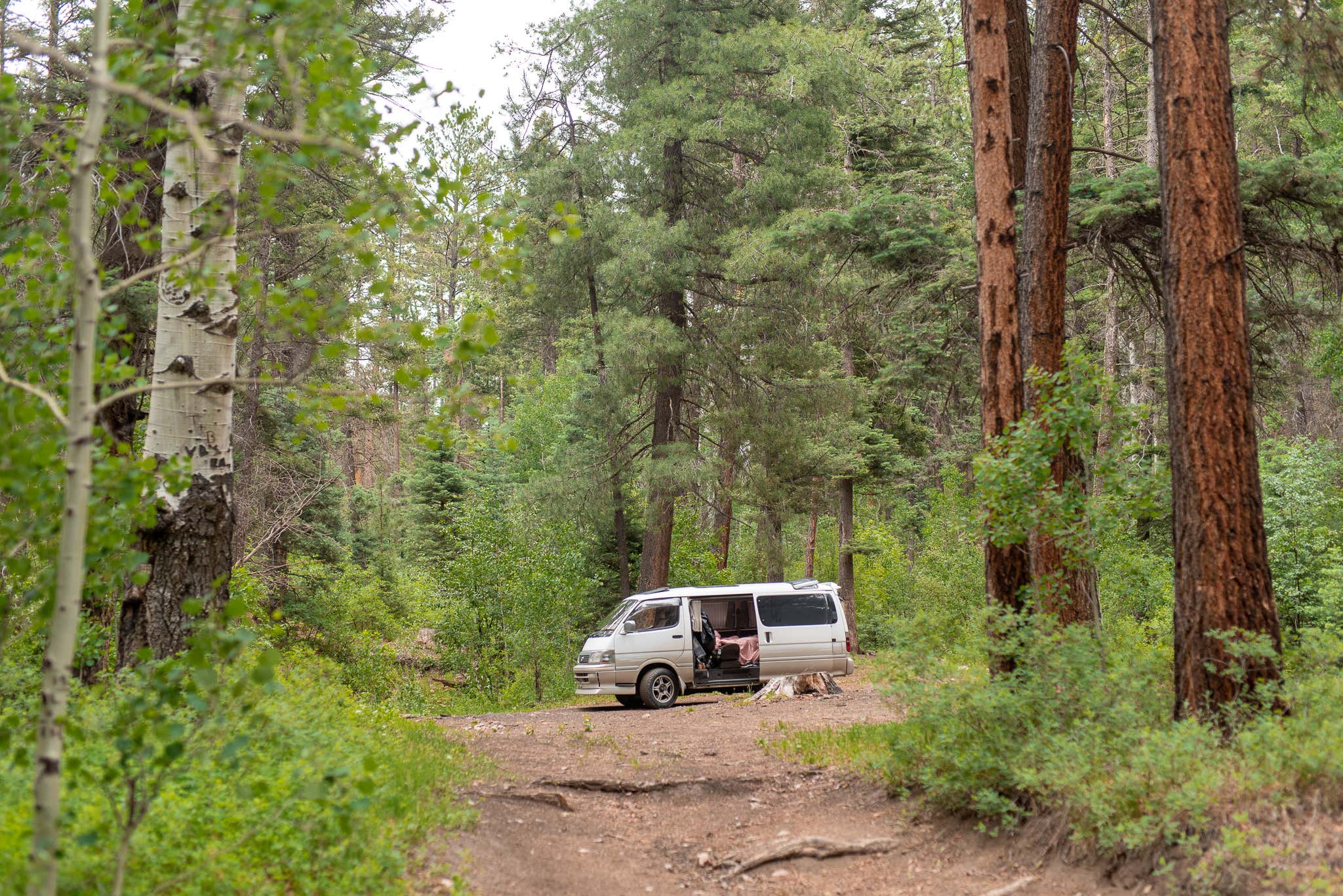 And now as I write this, I sit in Santa Fe National Forest. I navigated my way through some actual overlanding trails, and I’m incredibly proud of Marsha for tackling it without breaking so much as a sweat. Trees hundreds of years old shade my big moonroof as I type, and I am truly enjoying myself. These aren’t unique experiences, of course, just like driving through the desert was nothing truly undiscovered—plenty of people take vans on road trips and sleep in National Forests.

But they are what I need right now and they are so, so new to me, and I feel like I’m discovering new emotions on an hourly basis. I have never done this and I have knocked down my own walls in doing it, and I am genuinely happy I have, even if it’s nothing special in the grand scheme of life. 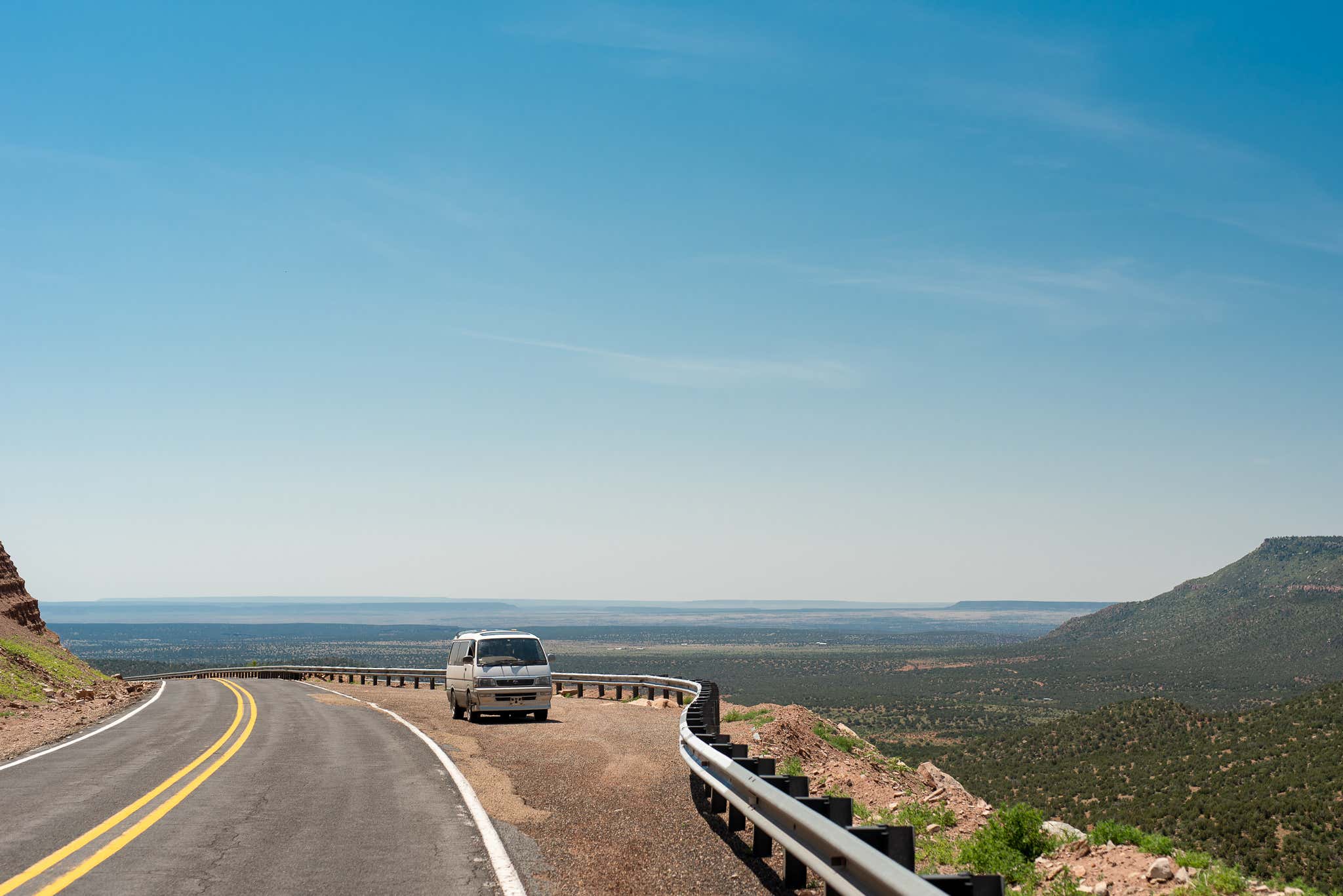 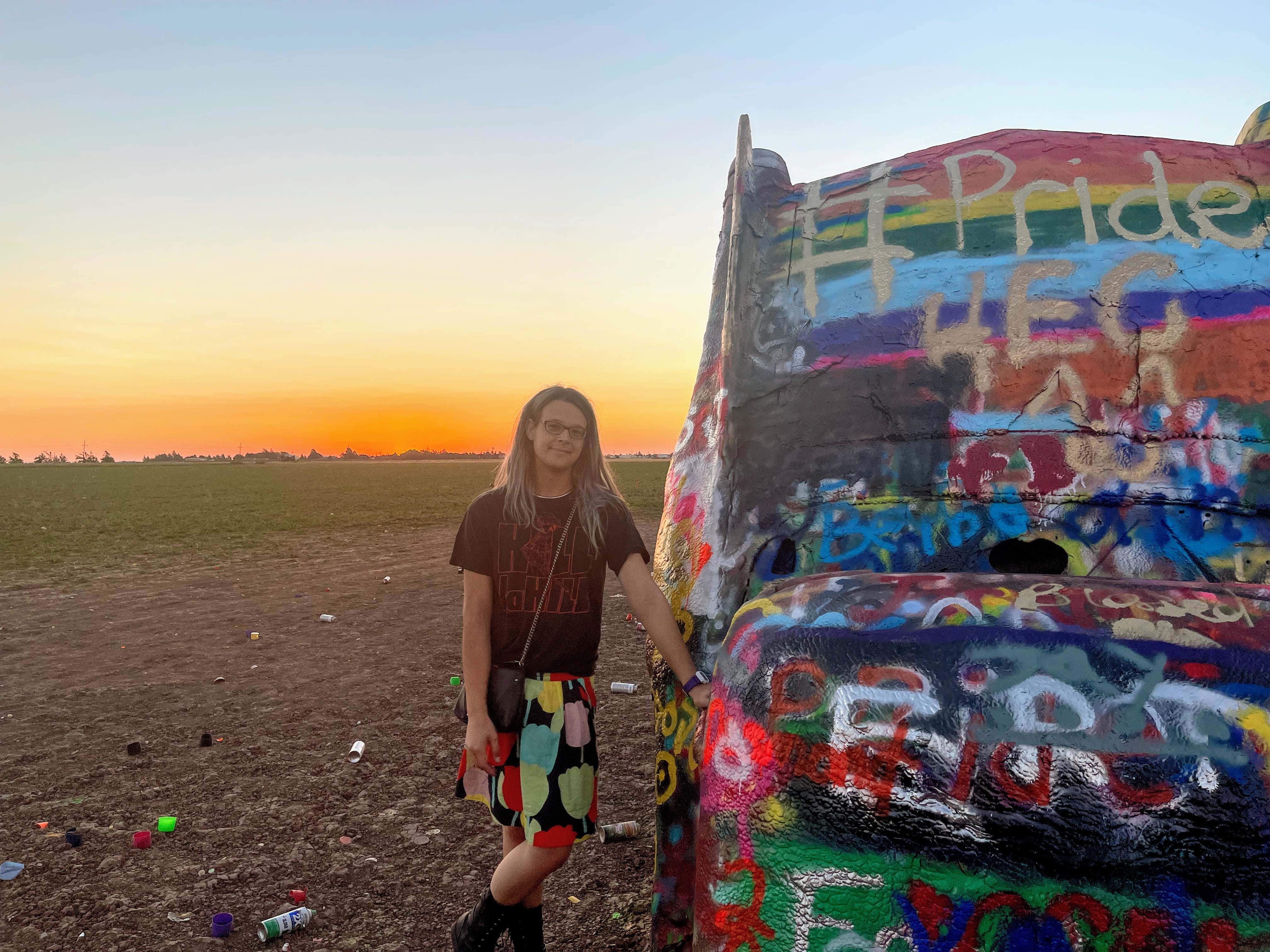 And this feeling brought me a measure of clarity about my writing, as well. I have struggled with the knowledge that I am not the most qualified author by a long shot for any of the topics I have dived into. The breakup that sent me on this journey was my first-ever, the end of my only relationship. My debut as a reviewer and photographer at The Drive was about how I had never driven a single Porsche before the 911 SC I reviewed. As a mechanic, I am solidly mediocre, and I have yet to ever crack open a head or drop a subframe. As I write this, I am two days away from my first anniversary of starting hormone replacement therapy, and I’ve only been publicly out about as long. I have felt guilty to be an author on these topics and truly feel as though I can offer little.

But somehow, people like my stories. The desert has always been here in New Mexico, just like trans people have existed for literally thousands of years, and nearly all of humanity has felt the pain of a breakup. But if I write about them well, maybe others can find solace in recalling the days when that novelty was fresh, and those who still have yet to experience it can remember my stories and know they aren’t alone when they finally experience these wonders and these pains. It has given me new drive in my writing. 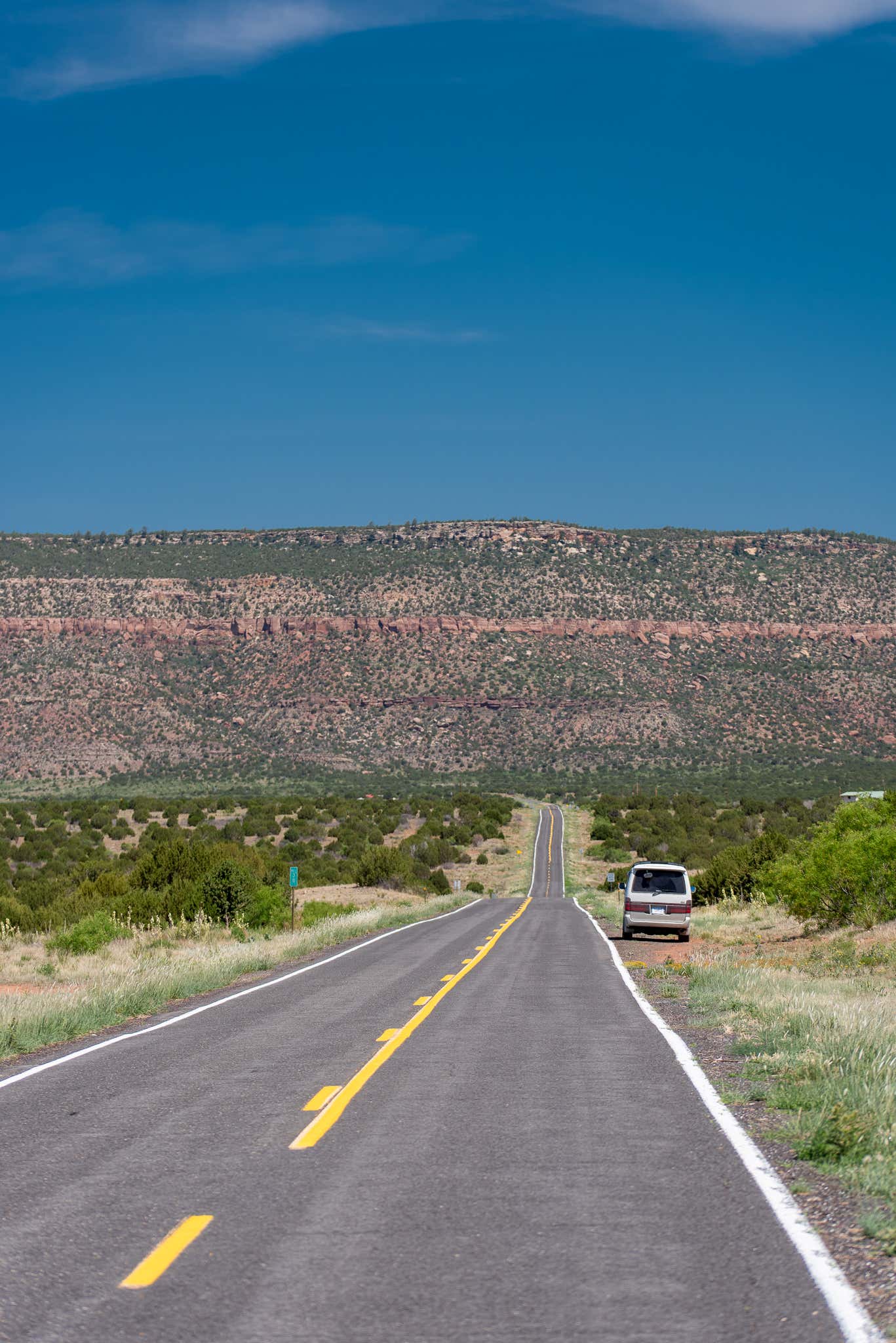 And from here, I’m not sure where I’ll go. I don’t need to be in civilization for over a week. I am going to let the awe of novelty guide me to whatever seems most interesting, and keep enjoying the sights.

You can follow Victoria’s journey in real time on Twitter here. Got a tip? Send us a note: [email protected]