The Gilmore Museum Is Holding a Virtual Car Show, and You\u2019re Invited

The Gilmore Car Museum is really worth a visit if you’re anywhere near western Michigan. Its 90-acre campus, in charmingly named Hickory Corner, Mich., actually contains a number of independent museums, including facilities devoted to the Ford Model A, Pierce-Arrow and more. There’s even a vintage diner on the premises.

And on any given weekend in the driving season, the Gilmore usually hosts some sort of car show—there are 18 to 20 of them per year, featuring everything from British cars to hot rods.

Of course, this year is a little—OK, a lot—different. The museum is currently closed to the public by state order. But rather than throwing in the towel, it’s working to keep enthusiasts active and engaged until this pandemic blows over. As part of that effort, it’s holding what it’s calling its first virtual car show on April 11.

The virtual car show is exactly what it sounds like. Jay Follis, the Gilmore’s director of marketing, came up with the concept after seeing people share pictures of their rides informally in car Facebook groups.

“Pulling into work one morning I thought: Wait a minute, we could do a car show. People don’t actually have to come to the campus and drive their cars and walk around. We can do it where we build it up, and do preregistration, and have categories and all that kind of stuff. … Rather than getting out and walking around, you can stay at home and social-distance but still say, ‘Wow, I’ve never seen that car’ or ‘Wow, that’s my favorite.’” 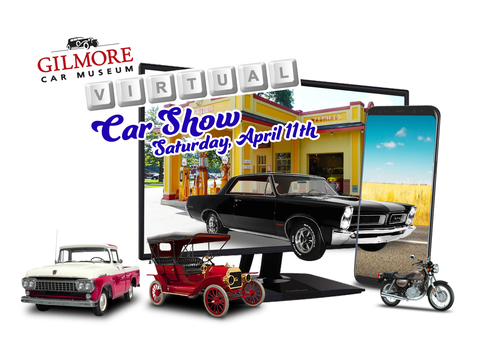 So far as we know, the Gilmore is the first organization to try this in a formalized manner, but in this climate it wouldn’t be surprising if it was the start of a trend. To enter, all you have to do is take a picture of your car and send it, along with your name, where you’re from, the year, make and model and a note about anything that makes it special, to [email protected] You’ve got to do it by April 9.

The show will start at 9:30 a.m. on Saturday, April 11, when entrants will be posted on a dedicated page on the Gilmore’s website.

The goal here is, as Follis says, to make this feel as much like a real car show as possible. To that end, entrants will be broken into the following categories, with a prize for first-place winners in each class and bragging rights for second- and third-place vehicles:

Additionally, there will be awards in the following categories:

In case you were wondering, that “farthest” award will work like it would at a real in-the-metal car show: Whoever posts from the locale farthest away from Hickory Corners wins. “We’re thinking, if you’re outside the country—I mean, if you’re from Australia, you’re never going to bring a car to one of our shows—why not? This is the perfect opportunity,” Follis says. Collector(s) in Fiji, it’s your time to shine.

Follis, for the record, will be entering a handful of his and his wife’s vehicles: a 1917 Ford Model T, a 1947 International pickup and a 1974 Ford Gran Torino in Starsky & Hutch livery (though he’s quick to note that obviously, he won’t be eligible for any awards.) “We’re encouraging people, if they want to put in three or four cars—the more, the merrier,” he says.

Response so far has been encouraging, according to Follis. “As soon as we posted it we started getting submissions—it’s been pretty exciting.”

I’m sure more than a few readers are skeptical about the value of this sort of exercise. Like watching a bunch of professional race car drivers play video games, there’s no way a virtual car show can compare with the real thing, right?

I get it. I’m right there with you when it comes to hating virtual meetings or video hangouts with friends. But what’s the alternative? Wallowing in frustration and self-pity? If nothing else, the Gilmore’s virtual show is a great excuse to get your car looking good. You’ll feel better once you get out in the garage and start working on it. I guarantee it.

Don’t forget to enter by April 9. I’ll be there, virtually, on the 11th. So if you see my ’51 Packard, wave—you know, digitally, or whatever.