The Drive and Donut Media Are Now Under One Roof 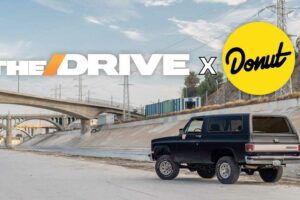 Two notable things happened in September 2015—well, more than two things, but this isn’t We Didn’t Start the Fire Part II, OK?—that set up what we’re announcing today. This website you’re reading right now, The Drive, blinked online and pushed its very first articles with the aim of taking the /DRIVE video brand and building a smart, incisive and irreverent car culture publication around it. And over on YouTube, a little channel called Donut Media uploaded its first video, a cinematic look at the infamous 24 Hours of LeMons crapcan endurance race, which is actually still worth a look.

Over the last six years, The Drive has grown from a niche auto-lifestyle outlet to one of the most popular automotive sites on the internet, one with more than 10 million readers every month. And Donut? Well, that LeMons video begat a YouTube empire with a whole ecosystem of internet stars, over a dozen shows, and nearly 6 million subscribers to its name.

Now, we’re both under the same roof. Our parent company Recurrent just acquired Donut Media, and frankly I could not be more excited to have them in the family. Between The Drive, our friends at Car Bibles and now Donut, we’re building one of the biggest automotive powerhouses on the internet.

As a reader and hopefully a fan of The Drive, I want you to know why you should be excited too. We’ll have more to share in the coming months about specific collaborations and team-ups, but there’s no doubt the collision of two dynamic and vibrant editorial voices like ours is going to throw off some fascinating sparks. We have lots of ideas, like how we can add a written element to some of their wilder projects and schemes, or how Donut’s production expertise can help kickstart The Drive’s slumbering video operation in a big way for 2022 and beyond. Stay tuned on that.

And though our styles and voices may be different—and we can all promise you, Donut will stay Donut and The Drive will stay The Drive—we share a common vision for modern car culture that’s fun, inclusive and built to last.

I saw that for myself last month when I took a drive down to Donut’s Los Angeles studio space to meet the team. Apart from the free snacks and the polished concrete floors, what really stood out was the absolute focus everyone has on delivering on the promise of Donut in everything they do. They know what it means to their viewers, but more importantly, they know exactly what it can be: One of the biggest YouTube channels in the country, if not the world. They’ve teed up millions of young people to be car enthusiasts for life, and when you see their dedication and talent up close, you understand how they pulled it off.

In that way, we’re kindred spirits. Just like them, we’ve worked hard to make this place something lasting, something special, and that’s why we take our jobs so damn seriously.