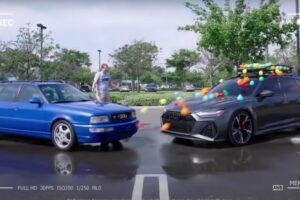 Recently, Audi of America decided to spend an awful lot of money making an extended advert. How much? We don’t know for sure, but to give you an idea, the credits take three minutes to get through. Titled ‘Led Balloon’, the eight-minute-long video had filming units in three US states and one in Germany. Oh, and it features some of the greatest figures from Audi motorsport history.

We have Hans-Joachim Stuck, Walter Röhrl, Hurley Haywood And Tom Kristensen, along with a smorgasbord of legendary Audi competition cars. There’s the S1E2 Group B rally monster. A 2013 R18 LMP1 car. The 1989 IMSA Quattro 90 GTO. And most impressively of all, the sole surviving Auto Union Group C Grand Prix car. These are not cheap things to wheel out and run in anger.

This is only one small part of the main story, which revolves around – for some reason – a massive water balloon fight. There are many actors and extras, Audi products new and old, CGI drones, CGI concept cars, and finally, a cameo from columnist and YouTuber Doug DeMuro plus his own RS2.

The video was released via YouTube on 18 August, but one week on, after all that effort and expense, it was made private. The reason for its hasty removal is unclear – nothing stands out as being offensive or misleading. It plays it so safe, there are evening warnings about properly securing your cargo, just in case you want to transport a few hundred water balloons.

The video is a little cheesy and its messaging not awfully clear, but we’ve seen far worse attempts at car advertising, including some from Audi. Remember that bizarre short showing an R8 ‘giving birth’ to an RS3, which came out covered in an amniotic-like fluid? Shudders. In contrast, there’s a nice sense of light-hearted fun to this particular effort, but it seems there are some within Audi that weren’t on board with the film.

According to Tire Meets Road, an anonymous source claimed in a post (also since deleted) that Audi AG execs asked Audi of America to remove the video as, “They did not like how it depicted the products and they didn’t understand the point of the video”. The Internet never forgets, of course, and there’s already one re-upload we know of, and more will no doubt follow.