The Cool Cops in 1978 Drove the Pontiac Catalina Freeway Enforcer

In 1970s North America, most police vehicles were full-size sedans from Ford, Chevrolet and Plymouth (with the occasional Dodge driven by the departments with a few extra bucks in the budget). By the end of the decade, though, fuel economy seemed more important than it once had, thanks to certain geopolitical events beyond the control of your local police department. For the 1978 model year, Pontiac offered the compact Phoenix alongside the full-size Catalina, with a full complement of heavy-duty hardware available for either one. Here’s the brochure for those cars, courtesy of our friends at The Old Car Manual Project.

The Catalina got the downsizing treatment for the 1977 model year, but the sedan still scaled in at 3,591 pounds in 1978. When your department bought the Cop Catalina, it had a choice between the Police Patrol version or the mighty Freeway Enforcer. Freeway Enforcer! That’s one of the all-time great car names. Engines ranged from the not-so-quick 2-barrel Pontiac 301-cubic-inch V8 (rated at 140 hp) to the perp-pursuin’ Pontiac 400-cube V8 (rated at 180 horses).

Yes, air conditioning and an AM radio cost extra.

Unlike the nasty Citation-sibling Pontiac Phoenix that came later, the 1978 Phoenix was really a rear-wheel-drive Chevy Nova with a different grille and taillights. This made it mechanically similar to the Camaro of the same era. You wouldn’t want a ’78 Phoenix if you had to ram Grand Marquis-piloting baddies off the interstate, but it served well as a patrol car in town. Bottom-line-minded departments could get the 3.8-liter Buick V6 in the police Phoenix.

Even power steering cost extra in the police Phoenix, as did the “Deluxe” wheel covers. 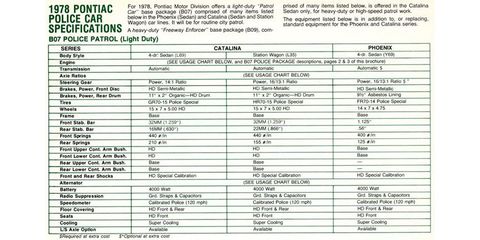 All versions got the rubber flooring and heavy-duty seats, of course. 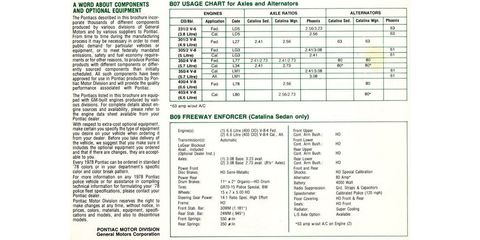 Most police departments shopping for new GM sedans in 1978 probably opted for the marginally cheaper Chevrolet Caprice over its near-identical Catalina sibling, but that Catalina Freeway Enforcer must have been tempting. Perhaps memories of Sheriff Buford T. Justice getting outrun in his ’77 Pontiac LeMans the year before hurt sales, though.