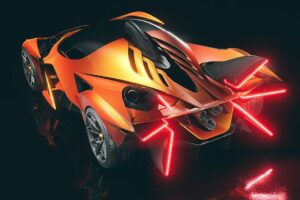 You could never accuse the Apollo IE of looking underwhelming. Aggressively sculpted flanks and an enormous rear wing ensure it looks suitably batsh-t, but somehow, Apollo Automobili – the company that rose from the ashes of Gumpert – has upped the ante even further.

What you see here is the Evo. The genetic link to the IE is plenty clear at the front despite some heavy styling changes giving a more ‘open’ look to its face, but at the rear, it’s barely recognisable. Here, the rear wing has been ditched and replaced with six huge fins illuminated by red lights, with a triple-exit exhaust poking through the middle. The result is a rear-end that looks like it belongs on a spaceship from Star Wars, not a hypercar.

The front “floating” clamshell is inspired by the Apollo Arrow, an intended road-going little brother to the track-only IE (so far only seen as a concept). Another notable feature is a more tucked-in look around the sides, exposing massive air ducts. Up top is another clamshell with six louvres, just ahead of which is a roof scoop.

The latter, we suspect, feeds the same 6.3-litre, naturally-aspirated V12 as the IE. We don’t know for sure, as details are still hard to come by. We just have these three images along with some vague details from Apollo’s website, and some snaps taken on the ground and Tweeted by journalists at the Shanghai auto show, where the car has been publicly revealed. As soon as we discover more, we’ll update this piece.

Apollo has at least confirmed that the Evo is – much like the IE – built around a carbon fibre monocoque. The company says the Evo is “equipped with a handling package developed by the world’s best automotive engineers”. The IE, you might remember, featured development work by HWA AG, the outfit behind the Mercedes CLK GTR.

Also confirmed is a “naturally aspirated powertrain” which Apollo boldly says will “deliver raw power and a visceral mechanical soundtrack unavailable elsewhere in the contemporary and historical hypercar world”. The N/A V12 in the IE, as a reminder, is good for 769bhp, all of which is sent to the rear wheels via a Hewland sequential racing gearbox.

The Evo will likely be another circuit-only machine. As far as track toys go, it’ll be a pricey one – expect a price tag over £2 million if its predecessor is anything to go by.

Make sure you don’t miss the week’s top car stories or our best offers by signing up to the Car Throttle newsletter!