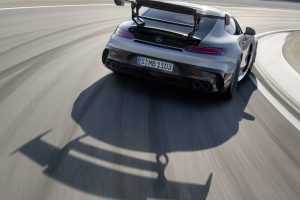 We knew the Mercedes-AMG GT Black Series wasn’t going to be cheap in the UK, with the price in Euros for the German market confirmed at €335,240. That comes out to about £301,000, but it turns out the car costs near enough the same in British pounds as it does in Euros – £335,000, to be exact.

For comparison, the Porsche 911 GT2 RS was £207,000, and even after the Weissach Pack was added, it was still over £100,000 less. Want more context? You could look to cars in the Mercedes-AMG range, as it’d be possible to buy a small fleet of Affalterbach weapons for the same price as one GT Black.

Add all that together, and you get a figure of £331,104 – a sports car, estate, SUV and a hatchback for less than the price of one GT Black Series, with change left for a few options for the cars that aren’t as generously equipped as standard.

Not that any of this is relevant – the kind of person who’ll buy an AMG GT Black Series will in most cases be loaded enough to own all of the above too. And much more besides. It’s a car for collectors, but it should be pointed out that there is plenty of substance to help justify that sky-high price tag.

The Black gets a flat-plane V8 engine not used in any other Mercedes model, a festooning of carbon fibre aero parts including a new vented bonnet and a giant rear wing, adjustable suspension and huge Michelin Pilot Sport Cup 2 tyres. Also, £335k does get you everything – the sole, no-cost option switches the AMG Track Package for a Comfort Package with plusher seats and normal seatbelts.

The GT Black Series is on sale now, with the first UK customer cars landing in August.